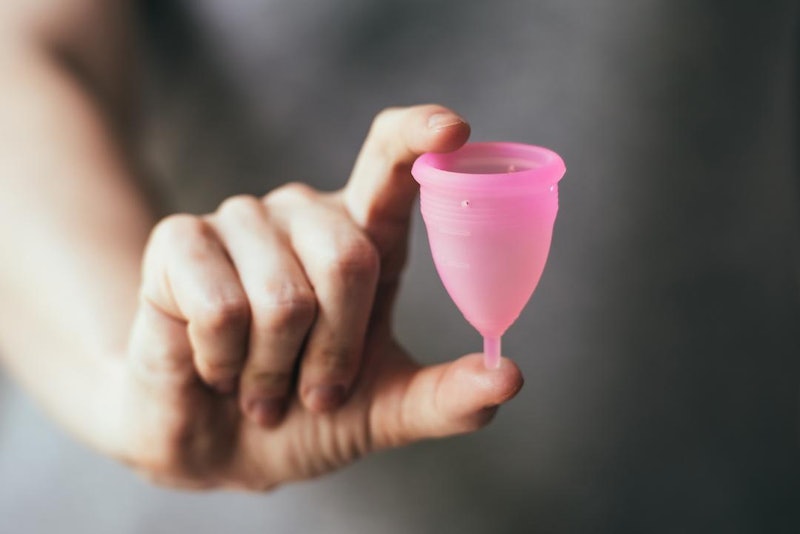 Remember that Sex and the City episode where Carrie gets her diaphragm stuck in her vagina and Samantha has to help her get it out? Well, this can happen with other things too. If you've ever wondered: Can you get a menstrual cup stuck? The answer is yes, but you can totally get it out without asking your bestie for help (though many people have used a helper or a doctor to dislodge a stuck cup). While you might have a moment of panic, you're going to be just fine. "Your vaginal canal is not an endless nor even a cavernous space; it’s actually pretty narrow with a comforting dead end at your cervix," the menstrual cup company Intimina noted on its blog.

"Meaning? It is impossible for your cup to be swallowed up by your body or to get lost in there ... Once it’s in, there’s only one place for it to go — out." So, the first step to expelling a stubborn menstrual cup is to relax, which might sound easier said than done when you feel like you have something stuck inside of you. However, tensing up will only it make it more difficult to remove your cup. "Squatting often helps, but do not insert any object into the vagina to try to retrieve it," Dr. Jennifer Wilder told SheKnows. "It can do more harm than good. You can end up injuring yourself and/or causing an infection."

If you're a first-time menstrual cup user, it's definitely different than taking out a tampon, so you might think it's stuck when it's actually not, according to Intimina. And, remember, there isn't anywhere for it to go so you can get it out. "Your cup might have moved up too high for you to get a good grip on. If this happens, make sure to use your pelvic floor muscles to push down, until you can get a good grip on the base of the cup," Intimina advised in its step-by-step menstrual cup removal guide. "Once you can feel it, pinch the bottom of the cup until you can feel the seal break and air enter the cup."

If it still won't budge, try pressing the rim of the cup. It's possible that it was inserted at an odd angle or that it suctioned itself onto your cervix. Intimina suggested washing your hands and inserting two fingers inside of your vagina to locate the cup before trying the first two steps to remove it. If you are panicking, that's totally normal for new cup users — just like everything tricky you try for the first time.

"Upon getting into a comfortable position, I realized that I couldn’t actually reach the cup. Somehow the little bugger had weaseled it’s way pretty far up there. After only about [two-to-three] minutes of 'searching' I was in a panic and a cold sweat," Natalie Cosgrove wrote on the blog HelloFlo. When Cosgrove wasn't able to retrieve the cup herself, she made a trip to the doctor where she was told that this sort of thing happens all of the time. If you do have to go to the doctor to have your menstrual cup removed, it's nothing to be embarrassed about.

Sometimes your cup can get stuck if it isn't the right size or if it sits too high in your vaginal canal, Cosgrove learned after her cup was extracted. And, if you're like me and throw out directions to something as soon as you open the package, it really is all about #TheMoreYouKnow when it comes to your menstrual cup. "I made the mistake of just casually glancing at the instructions months ago when I opened the package and then tossed them right out," Cosgrove wrote. "If it’s your first time take the 5-10 minutes to read that tiny-print fold out sheet and get to know your product."

As it turns out, a stuck menstrual cup is a pretty common problem with Reddit threads and message boards dedicated to helping people in the midst of menstrual cup woes. So, you definitely are not alone in this. If your cup does get stuck, you might be afraid to use it again, but the more you use the menstrual cup, the easier it is. Kind of like with tampons. Sharmada Shastry wrote on the blog Menstrupedia that she was determined to keep using her menstrual cup even after it got stuck. She was able to remove it herself, and after trying again she's a cup convert. "During my next period, I used the cup successfully, without it ever giving me trouble," she explained. "Yes, it is slightly tricky, especially its insertion and removal. Once you master your way around it though, there is no looking back."

In the end, it's really all about your comfort level. And, if you decide you don't want to continue your relationship with the cup, that's OK. No matter what happens between you and your cup, remember that your menstrual cup can't get lost inside of you, and there is always a way to get it out.

Editor's note: This story was updated from its original version on Feb. 27, 2018.