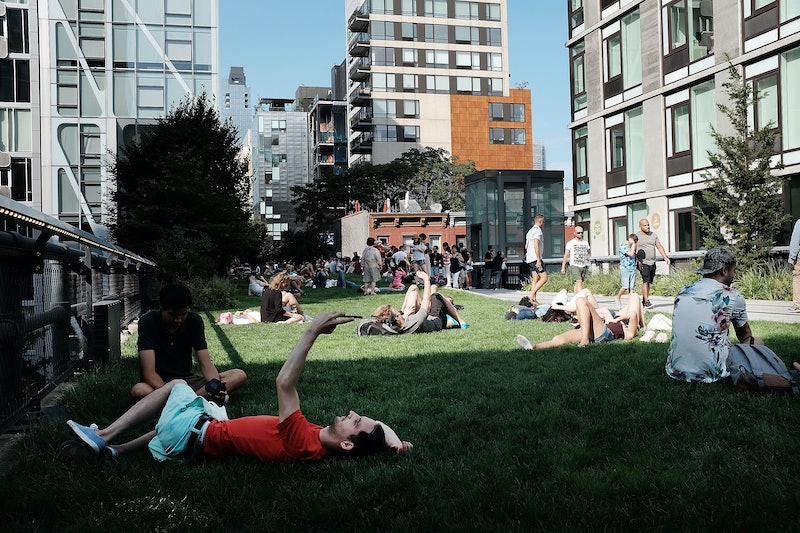 With all of the recent news about the spread of Lyme disease, you probably think that you're safe from tick bites if you stay out of the forest. However, you might not be aware that you can get a tick bite in a city park, even if you live in a dense urban area. A study published in the journal Parasites & Vectors found that ticks are indeed well established in cities. "Despite twice higher tick abundance in natural areas in spring, the mean abundance in both urban and natural areas is not dramatically different, particularly in late summer-autumn or in parks," the study reported.

So, even though you're twice as likely to be bitten in a natural environment, you can still get a tick bite in the city. This could be just as dangerous because you're likely less vigilant at your neighborhood park than you are when you're out in the woods. And, just like most environmental hazards, humans are to blame for this phenomena. Northeastern University reported that urban sprawl is bringing an abundance of mice into cities, and mice bring the ticks. "While ticks can crawl slowly, their main mode of transport is hitchhiking," University Distinguished Professor of Biology Kim Lewis, who directs Northeastern’s Antimicrobial Discovery Center, said in the article.

"Ticks will gladly take a lift from deer, dogs, and people. But their primary host is the white-footed mouse, which is common in the New England forests, towns, yards, and cities, and is the primary transmitter of Lyme disease." Seriously, if you're looking for an excuse to spend less time outside, this makes a pretty good case for spending a majority of the year indoors.

If you want to reduce your risk of being a blood meal for a tick, and potentially contracting Lyme disease, Northeastern University recommended using a DEET insect repellent, covering yourself when venturing into parks, and showering immediately upon returning home. This all sounds like a lot of work for what should be a relaxing afternoon in urban nature, but it's better to be safe than sick.

While ticks are especially prevalent in the northeastern U.S., they can be found all over the country. On its website, Western Exterminator Company identified Portland, Ore., San Diego, Los Angeles, Eureka, and Santa Rosa, Calif., as western cities with high tick populations. "Traditionally, ticks are a big problem for the Midwest and eastern United States, but lately, scientists are seeing an expanding geographic range for tick activity. Living on the West Coast no longer guarantees that you’ll be safe from ticks," Ashley Smith wrote for the company's blog.

If you do find a tick attached to your clothes, body, or even your pet, don't panic. The Centers for Disease Control and Prevention reported that the blacklegged deer tick must be attached to its host for between 36-48 hours before it can transmit Lyme disease. This is why it's important to check yourself and your pets immediately after returning from the park. If you do find a tick, remove it properly using tweezers, and following the steps outlined by the CDC.

What's more, before you apply tick repellent to yourself or your pets, make sure to read all of the warnings carefully. For example, pyrethrin insecticides are toxic to cats, so you never want to use this in your home, on your dog (cats can get poisoned from close contact), or on your clothes if you have a cat, VCA Hospital advised on its website.

In general, practice the same vigilance in city parks as you would venturing out into the wilderness. If you do discover a tick on your body, and you're not sure how long it's been there, see your doctor. The CDC noted that Lyme disease can be successfully treated if it's caught early.