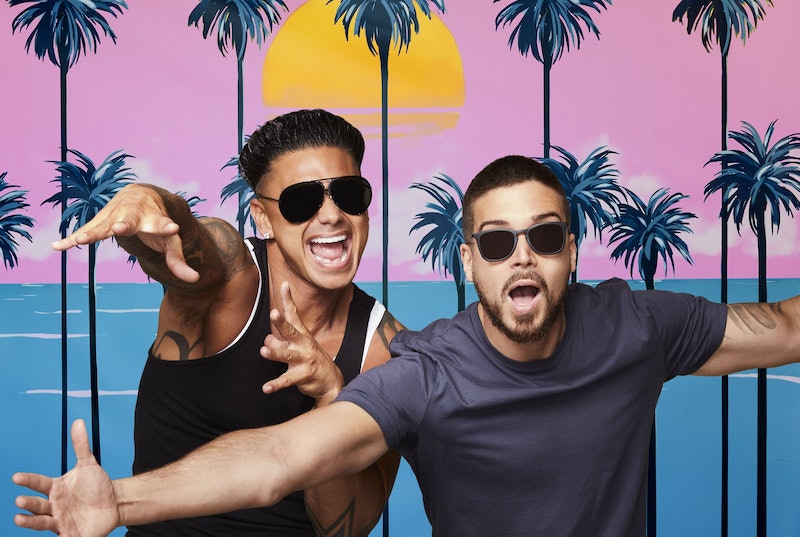 Back in January, the official Jersey Shore Twitter account asked fans of the show to cast their votes about where to send the fam this time around, and Miami came out on top. As the Magic City was the site of their Season 2 rollicking in 2010, it feels like the natural choice — well, next to the actual Jersey shore. While the exact location of their new crib hasn't been made public, E! News spotted some of the cast downing morning beer bongs on the deck of their new digs.

Ronnie was kind enough to give Us Weekly an exclusive tour around the gorgeous property the group will be calling home during Jersey Shore: Family Vacation and it is a major upgrade from the days of single beds in Seaside Heights. It only took nine years but everyone has finally graduated to their own full-sized beds — not to mention an infinity pool and priceless view. Some things never change, though: there's still an official designated "Smush room," although who knows how that's going to work since everyone except Pauly D. is married or in a relationship. And Ronnie assures fans that he and Mike will still be sharing a (messy) room. "Stuck with the same roommate, seven houses in a row," he complains.

There's no doubt the inside of the house is luxe AF, but it looks like everyone is going to be spending a lot of this vacation in the backyard. Not only did Ronnie brag to Us Weekly about the yard, but Snooki and JWOWW gushed over it in their own tour, which they posted on the official Jersey Shore Instagram.

The first time the crew tore up Miami back in Season 2, they crashed at the Hotel Metropole in a suite modified especially for them. Back then, they paid $2,000 a night, according to the Miami New Times. Executive producer SallyAnn Salsano gave The Los Angeles Times an exclusive behind-the-scenes peek at the pad while the cast was living there back in 2010. The vid is seven minutes long, but it's worth it when you get to 5:21 and see proof that they did, in fact, change the sheets in the Boom Boom Room.

Today, you can rent a suite of your own at the Hotel Metropole — now called the Metropole South Beach Suites — for you and up to five of your closest drinking buddies (I guess the 9-person Jersey Shore suite is off limits unless you're with MTV?). For mere mortals, they only offer one- or two-bedroom suites, which will run you around $220 and $440 per night, respectively.

While no one's mentioned exactly where the new house is, People TV Watch spotted the gang sharing lunch and fish bowl margs at a restaurant on Ocean Drive. According to Us Weekly, the crew (minus Mike) spent the entire day relaxing at their own VIP table. Mike "The Situation" Sorrentino couldn't join at the time because of some legal troubles, he's definitely made it to Miami by now. One Instagrammer peeped the crew fist-pumping at Shots Bar in Wynwood.

Nearly the entire crew will be back together again in the new house, although unfortunately, Sammi decided to stay away this time. Although if she does change her mind and decide to drop in (fingers crossed that she does!), it looks like the Jersey Shore: Family Reunion house has more than enough room for guests.