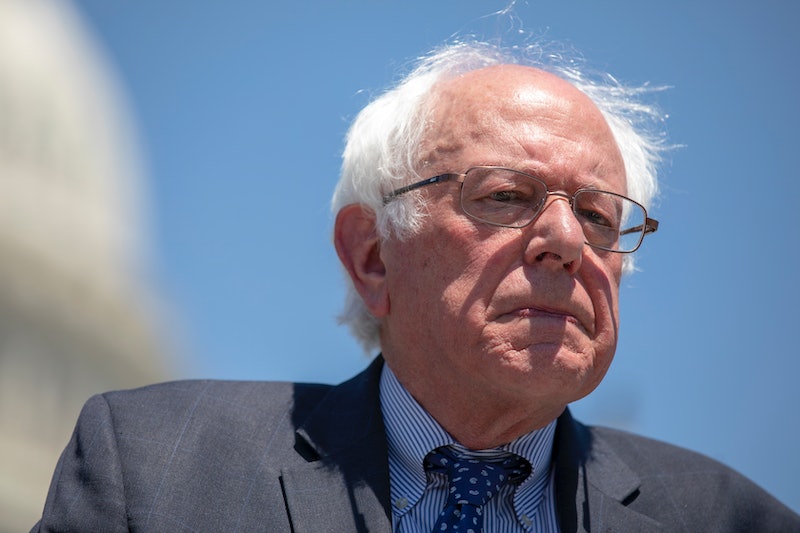 Weeks after he officially announced his bid for the 2020 presidential race, The Daily Beast reported on Monday that Vermont Sen. Bernie Sanders also filed for re-election to the Senate in 2024. With Sanders running for two different federal offices, you might be wondering: can someone run for president and the Senate at the same time? As evidenced in Sanders' case, it really comes down to which state you're from.

Depending on the state a politician represents, they technically can pursue the presidency and another political office at the same time. Roll Call reported that in places like New Jersey, Massachusetts, Ohio, West Virginia, and Hawaii, state law allows candidates to run a presidential and senatorial bid all at once. But even those laws come with their own little caveats.

Election law experts have discussed the pros and cons of running two simultaneous campaigns for office. James Gardner, who teaches constitutional state law and election law at the University of Buffalo School of Law, told Roll Call, "There are very legitimate reasons to prohibit people from running for two offices. It does not necessarily speak to the great commitment of the candidate to any particular constituency."

It is possible that a person running for two different political offices may be perceived as someone who won't be able to commit to presidential and senatorial responsibilities simultaneously. However, Gardner told Roll Call that in some cases it's worth allowing a politician to run for two offices. "Given, up until recently anyway, the view that the pool of highly qualified presidential candidates is limited, there’s a good argument for not artificially constricting the pool and particularly for not punishing the voters for elevating a talented person," Gardner told the publication.

Some states have sought to simplify the process of seeking two offices at once. In November 2018, New Jersey Democratic Gov. Phil Murphy signed a law that allowed candidates to vie for a congressional seat while also appearing on the ballot to become president.

For New Jersey Democratic Sen. Cory Booker, who officially announced his presidential bid in February, the law would help him seek two offices at once without hassle. According to USA Today, some lawmakers disagreed that such legislation was needed in the first place, but the president of the New Jersey Senate, who sponsored the bill, Democrat Stephen Sweeney, offered his rationale. "This was just to stop any lawsuits to slow him down," he told USA Today.

Will other states follow New Jersey's lead and open up for its politicians to run for president and Congress? It's hard to say, but you can keep an eye on the National Conference of State Legislatures for updates.