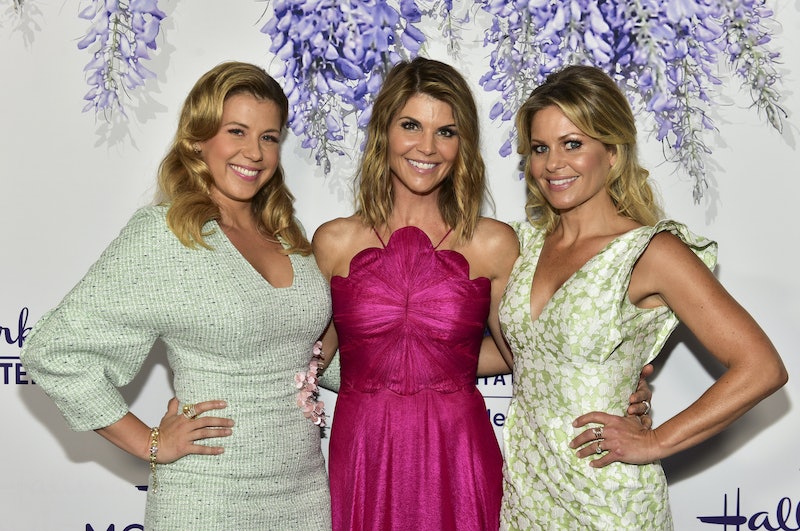 The Full House cast has each other's backs. During Today on Tuesday, Candace Cameron Bure supported Lori Loughlin amid the college admissions scandal. After host Hoda Kotb asked both Cameron Bure and Jodie Sweetin, who also appeared alongside her Fuller House costar, if they had any further comments about Loughlin, they once again proved their friend can lean on them.

While Sweetin simply nodded in agreement with her on-screen sister, Cameron Bure said about Loughlin and her serious legal situation,

This isn't the first time Cameron Bure has discussed Loughlin since the news broke in March regarding the college admissions bribery allegations that both she and her husband, Mossimo Giannulli, face. At the 2019 Kids' Choice Awards, Cameron Bure, Sweetin, and Andrea Barber accepted the award for Favorite Funny TV Show for Fuller House. During their acceptance speech, Cameron Bure said the following, all while seemingly alluding to Loughlin without ever mentioning her name,

For those unaware, as reported by the Associated Press on March 12, Loughlin and Giannulli are among 50 individuals, including Felicity Huffman, being accused of allegedly paying bribes in order to get their children into elite universities. Loughlin and her husband allegedly paid $500,000 for their two daughters — 19-year-old Olivia Jade and 20-year-old Isabella Rose — to be admitted to the University of Southern California as recruits for the crew team, despite the two not participating in the sport. (Bustle previously reached out to Loughlin and Huffman's reps for comment.)

Loughlin and Giannulli haven't given an official statement regarding the allegations. That said, on March 30 in Brentwood, California after leaving a yoga session, TMZ asked Loughlin if she was scared about the possibility of going to jail. She briefly stated, "I’m sorry, I can’t talk to you. You can follow me around all day if you want, but I just can’t comment right now. But thank you for your time."

Like Cameron Bure, Bob Saget also discussed Loughlin in a supportive manner. While exiting a Beverly Hills restaurant, he told TMZ on March 28, "You love who you love in your life. I just love who I love. Candace said it really good at the Kids Choice Awards. You love who you love. I’m on the team of people that I love, but life’s complicated. I don’t like talking about it."

On the same day as Saget's chat with TMZ, John Stamos left the same restaurant and told the outlet about commenting on Loughlin's situation, "I will at some point ― I’m just not ready to talk about it."

The Full House cast has made it clear that they aren't going anywhere, and if or when Loughlin needs them, they'll answer.

More like this
Hilarie Burton Calls Candace Cameron Bure A "Bigot" After Marriage Comments
By Jake Viswanath
Who Is Pete Davidson Dating? He "Courted" Emily Ratajkowski At A Knicks Game
By Jake Viswanath
Matt Smith Proves He's Daddy Daemon In This Viral 'House Of The Dragon' Video
By Marina Watts
Jennifer Lopez Shares Rare Holiday Photos Of Ben Affleck & Her Twins
By Radhika Menon
Get Even More From Bustle — Sign Up For The Newsletter