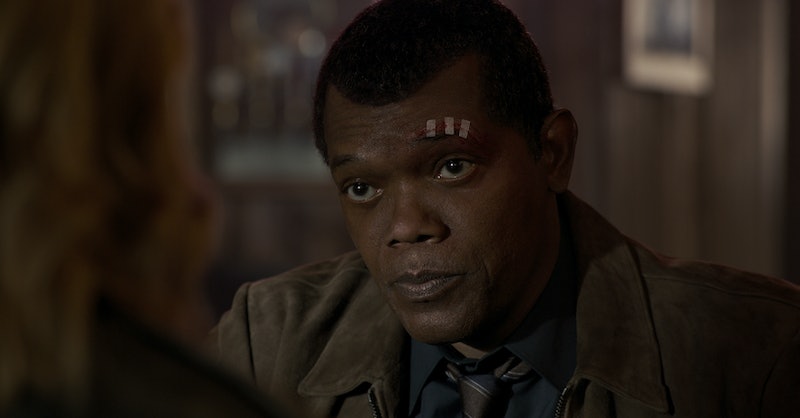 Spoilers ahead! Nick Fury's (Samuel L. Jackson) role in Captain Marvel is a supporting one, but he has more screen time in the new movie than he's had in the each of the rest of the MCU installments in which he's appeared. By giving audiences an in-depth look at parts of his backstory not previously explored onscreen, even showing how he lost his eye and earned his famous patch, Captain Marvel is as much an origin story for Nick Fury as it is for Carol Danvers. Since Fury is one of the few major characters of color in the MCU, that deep dive is both welcome and necessary.

Captain Marvel tells the story of Carol Danvers (Brie Larson), a former U.S. Air Force fighter pilot who, after a mysterious traumatic experience, ends up a member of the Kree civilization on the planet Hala, serving as a member of Starforce, the Kree's elite military team. A series of incidents that occur during a failed mission propel her back to Earth, though she has no memory of her previous life there. Crash landing into a Blockbuster Video earns her the attention of S.H.I.E.L.D. agents Coulson (Clark Gregg) and Fury, both actors digitally de-aged to reflect the 1995 time period. Neither of them, at the time, are aware of or believe in aliens.

Over the course of the film, Vers, as Carol initially calls herself, and Fury bond on what starts to resemble a buddy-cop quest. As they try to unravel the mystery of her identity, figure out what the green-skinned aliens the Skrulls are doing on Earth, and attempt to stop an intergalactic war from reaching her home planet, the two become close friends. We learn new things about who Fury was before we met him, such as where he's from, what is life was like in the U.S. army and the CIA during the Cold War, and even some funny personality quirks, like the fact that he can't eat toast if it's cut on a diagonal. Oh and he really, really loves cats.

He's talkative and sincere, which is a nice change from the Fury of movies like Iron Man and Captain America: The First Avenger, where he was still an intimidating, shadowy enigma, and the Avengers movies, where he plays the tough boss trying to keep everything together.

This Fury, on the other hand, is funny, charming, wide-eyed and a tad naive. He isn't a hardened S.H.I.E.L.D. agent with a chip on his shoulder yet, despite all he must have experienced in the army and CIA. He's warmer, and more open to new ideas and experiences. He's happy. In contrast, the Fury of the rest of the MCU is still charming and funny, but he's worn, he's tired, and he's a bit burnt out.

"You assume that [Fury] doesn’t know everything that he’s known," Jackson told Radio Times of his character in Captain Marvel. "He’s not quite as world-weary and beaten and suspicious and angry and all those things. He’s riding a desk, trying to figure out threat assessment, which is kind of boring. And he meets an interesting person who says she’s from somewhere else."

Captain Marvel rewrites MCU history to make Carol Danvers and Fury's experience with her the spark that ignites his next project: the Avengers Initiative. And it's a satisfying connector.

While Fury has been a presence in several MCU movies, the mysteriousness of his character kept him somewhat inaccessible. And for a franchise that could be much more racially diverse than it is, that was a problem.

Though the MCU has introduced characters like Tessa Thompson's Valkyrie, Don Cheadle's James Rhodes/War Machine (originally played by Terrence Howard), Zoe Saldana's Gamora, and Idris Elba's Heimdall, then brought Wakanda to life in Black Panther, the films are, overall, overwhelmingly white. According to a report by Mic, 45 out of the 69 top-billed MCU actors are white, and in several cases, it was Jackson himself who was the only top-billed person of color in the whole cast.

The studio was also criticized for the casting of Tilda Swinton as The Ancient One, an Asian man in the comics, in Doctor Strange. And many of the MCU's Asian cast members, like Pom Klementieff (Mantis in Guardians of the Galaxy) and Gemma Chan (Minn-Erva in Captain Marvel), are hidden under loads of alien makeup.

So though there should be more people of color in Marvel movies across the board, Captain Marvel's exploration of Nick Fury's backstory and personality is a welcome addition — the expansion and humanization of a character we're used to seeing but not used to knowing much about.

When Avengers: Endgame hitting theaters Apr. 26, it's going to be interesting to see how, 25 years into the future, Carol and Fury interact. While she was away in space for over two decades, he turned into the hardened, gruff agent we know and love. Will his sense of humor return when they get back together? Will the other Avengers be jealous of their friendship? Will someone get him a new cat? All of these questions, however, hinge on whether or not Carol can bring Fury back from the dust. Now that we know so much more about him, here's hoping we see Fury again.