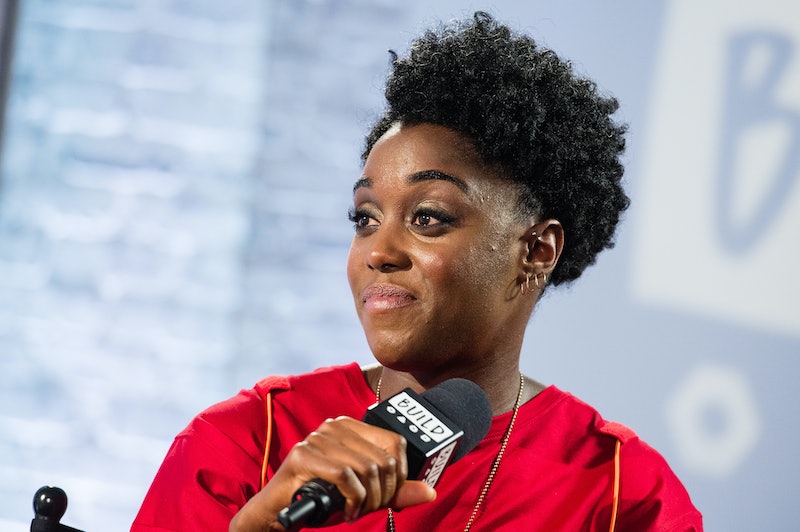 The newest entry into the Marvel Cinematic Universe, Captain Marvel, is ready to change the way that women are portrayed in superhero movies. And so are its stars. In fact, Captain Marvel star Lashana Lynch recently said that Maria Rambeau is already expanding what a female character in the MCU can be. In the film, Maria, the fighter-pilot best friend of Brie Larson's Carol Danvers, is more than a sidekick. She's a pilot and a single mother, with drive and conviction. She also happens to be a woman of color.

Lynch opened up about her hope that the film will help usher in a new era of female superheroes, including women of color in an interview with Marie Claire published on Monday, March 4, in which the British actress revealed how much being a part of the Marvel Cinematic Universe means to her. According to the interview, Lynch feels as if her character will help prove that superhero films have room for everyone. "My character and Carol Danvers are fighter pilots, [and] it’s nice to see how women can really burst through in that environment and hold their own," Lynch explained.

"You catch a lot of us being strong, driven, bold, females in the workplace, in what’s typically a male-oriented environment," she continued, "Just being a complete badass going to work. And that's all we want to do as females: We just want to rule the world and feel fly doing it."

Lynch also revealed that she's been hoping to become part of the Marvel Cinematic Universe for years, even begging her agent to get her an audition for Black Panther when she was in Los Angeles a few years ago during casting. "I was literally begging my manager to get me on," she recounted. "I thought, 'I’m here now, and I could just do a tape!' But nope. Didn’t happen."

Though Lynch missed out on appearing in the eventual Best Picture nominee, her role as Maria Rambeau makes her one of the first women of color to have a major role in the Marvel Cinematic Universe, following in the footsteps of Tessa Thompson in Thor: Ragnarok. While the cast of Black Panther was a major step forward in terms of representation, outside of that film, the only female superheroes to get major screen time were either white — as in the case of Scarlett Johansson's Black Widow and Elizabeth Olsen's Scarlet Witch in the Avengers films — or painted green, as in the case of Zoe Saldana's Guardians of the Galaxy heroine Gamora.

Lynch told Marie Claire that she was relieved that her race wasn't a factor when it came to being cast in Captain Marvel, explaining, "I’ve worked my whole career to just tell a story. If I can walk into a room and have the casting director not care about race — or even mention it— and still give me the job, I feel like I’ve won." However, she is aware of the impact that her presence as a black actress will have on superhero films going forward.

"Just being a black character right after Black Panther, they have so much scope that they could have done anything, Maria didn’t necessarily have to be there," Lynch told BET in a recent interview. "They could have put Monica [Rambeau, who eventually takes over the role of Captain Marvel] down the line. ... Marvel had a great opportunity to bring the lack community here." Lynch added that her character's identity as a single mother was also groundbreaking for the MCU. "And showing a Black single mother raising a queen was important," she said. "To play a single mother in the MCU, I think, is really special for audiences both young and old who don’t see that extended on screen."

While fans will have to wait until March 8 to see Captain Marvel on the big screen, they can take comfort in knowing that the film — and the characters of Carol and Maria, in particular — is already making changes both onscreen and off.