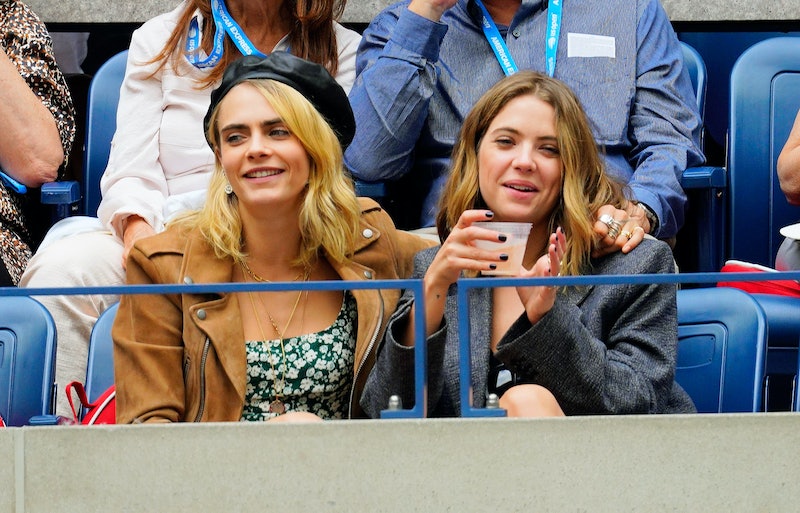 Just one week after the model's Twitter account was reportedly hacked and a breakup announcement was made, Cara Delevigne's birthday tribute to Ashley Benson on Instagram has made it very clear that these two are more in love than ever. To mark the Pretty Little Liars star's 30th birthday on Dec. 18, Delevingne posted a series of intimate photos of Benson on social media, along with a lengthy message of love for her longterm partner. "There is so much I could say but something I love and cherish most about us is that I don’t need to because YOU KNOW and that’s all that matters," the model and actress began her post.

Alongside photos of Benson on various trips they've taken together and romantic shots of them holding hands and kissing in the bathtub, Delevingne described the actor as "my safe place," and added that their relationship keeps her "free, secure and curious." She continued, "I feel like I’ve known you my entire life and I am so proud of watching you grow into the woman that you always dreamt of being."

Delevingne then wrapped up her post by telling Benson, "I love you beyond words," and revealing some of the goofy pet names she has for her, including "sprinkles," "angel face," and "butt munch." Benson's response was equally effusive, with the actor writing, "Love you my choonchie pet. My best friend. My kween," in the comments of Delevingne's post.

The couple, who met while filming Her Smell together, were first spotted together in August 2018, though they attempted to keep their relationship private for quite a while. Delevingne finally confirmed the relationship in June, when she posted a video of herself and Benson kissing on Instagram in honor of Pride Month. At the TrevorLIVE Gala a few days later, where Delevingne was being honored with the organization's Hero Award, the Paper Towns star explained that the post was a celebration of their first anniversary. "It is Pride, it's been 50 years since Stonewall happened and I don't know," Delevingne told Entertainment Tonight about her decision to make their relationship public. "It's been just about our one year anniversary so, why not?"

During her speech at the gala, Delevingne also gave Benson a "special" shout out, thanking her for her love and support. "She's one of the people who help me love myself when I needed it most and I really needed it," the model said, according to Benson's Instagram Stories from the night. "She showed me what real love is and how to accept it, which is a lot harder than I thought. I love you, Sprinkles."

Though the pair try to keep their romance out of the spotlight, they have become more comfortable with speaking openly about one another since confirming their relationship.

Still, it's very clear from their comments — and from Delevingne's birthday post for her girlfriend — that she and Benson are happier and more in love than ever, no matter what any hackers post on social media.