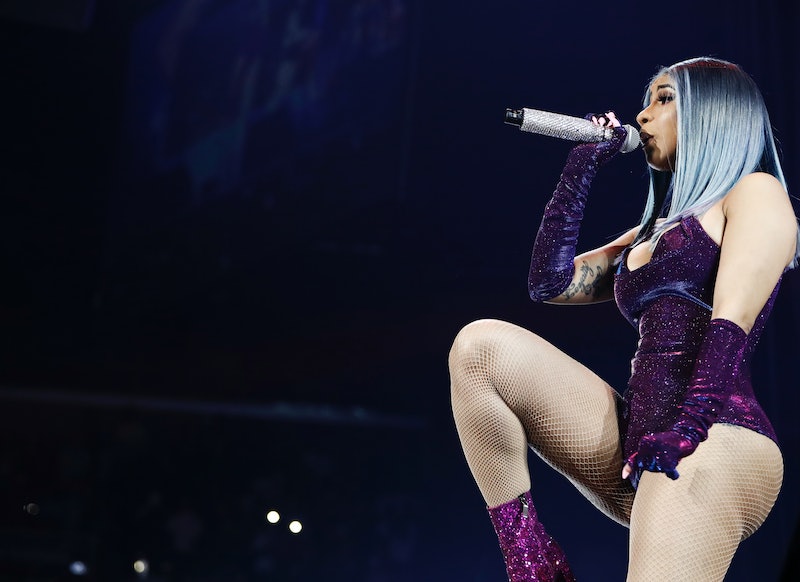 Cardi B is a talented rapper, fashion star, and soon-to-be actor, but there's something else she's great at, and it's making people laugh. Over the Fourth of July weekend, Cardi B threw her wig into the crowd at the Wireless Festival in London, and well, now she wants it back.

According to an Instagram and Twitter post from the "Bodak Yellow" rapper, she got so excited that she actually snatched her own wig while performing. Honestly, who could blame her? Have you seen her perform? However, it turns out that she got a little too in the moment. According to Allure, Cardi posted the video because she just wants her wig back.

In the captions on both Twitter and Instagram, the rapper wrote, "I GOT CARRIED AWAY .......I want my wig back:/ Dm me." Unfortunately, it seems unlikely that a member of the crowd will actually give her the wig back, but hey, there's always hope.

Regardless of whether Cardi B does get her wig back, though, it's hard to deny that the wig snatching moment by the artist herself was an iconic move, and her request to get the hair back is part of the hilarious reasons why people love her so much.

Cardi B's wig snatch is inspired tweets and Instagram comments ranging from laughing crying emojis and gifs to celebrities chiming in on the moment. Snoop Dogg commented on Instagram, "I’m done...U may have pulled off. The greatest move in hip hop," and he wasn't alone. Empire star Taraji P. Henson also add, "It be like that sometimes huh man," with crying laughing emojis.

Fans on Twitter were quick to chime in on what they'd do with the wig if they'd caught it.

The dominant theory appears to be that Cardi's wig has most definitely been sold online to the highest bidder.

Cardi B's self wig-snatch isn't the only time that this hilarious talent has made her fans laugh on stage during a concert. Back in January, the rapper was performing in New Zealand for the new year when she stopped the performance in the middle of her set. Why? Because apparently, she needed to fix her wedgie.

In a video that was posted by a fan at the concert, Cardi explained, "Anyways, yall, I need a little break. I'll be right back. I gotta take this wedgie out my ass." If you've ever seen the rapper perform, you know that she's working the stage, crushing her songs, and entertaining her fans. That can't be easy to do with a wedgie. Ultimately, though, Cardi did return to finish the rest of her set completely wedgie free.

Clearly, doing something hilarious on stage (while also being fierce busAF) isn't something new for Cardi B. While the "I Like It" singer may never actually get her wig back from whoever the fan was in the audience, at least it's clear that she made someone's night. Plus, let's be real, Cardi B can have whatever she wants, and that includes a new wig.