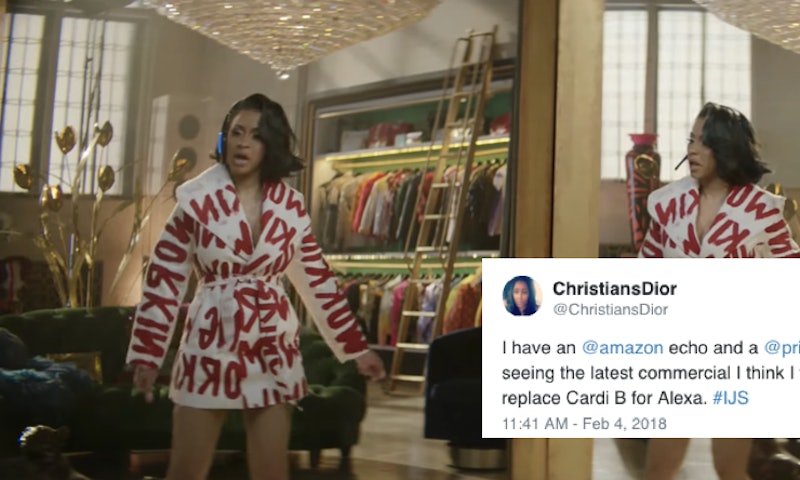 It’s possible that, if robots take over and become our overlords, we can wish that they'll be just as congenial and helpful as Amazon’s Alexa is. But Alexa works really hard. When does she get a break? That idea is explored in Amazon’s Super Bowl commercial — Alexa loses her voice, and so Amazon (and Jeff Bezos, Amazon founder, in a cameo) is forced to call in the reinforcements to lend their voices while Alexa recovers. Gordon Ramsay and Rebel Wilson are there, among others, but Twitter flipped out about rapper Cardi B in Amazon’s Alexa Super Bowl commercial. And for good reason, because, after all, who doesn't love Cardi B right now?

The commercial debuted online in advance of its Super Bowl spot, which gave people plenty of extra time to react and bask in the hilarity of Cardi B and other celebrities. Imagine a world in which you can choose any voice to direct your questions and calls? Of course, the downside is that Cardi B, Anthony Hopkins, Gordon Ramsay, and Rebel Wilson aren’t as helpful as Alexa. After all, Alexa is pretty much an omniscient being at this point, and Rebel Wilson’s talk of Australia and Gordon Ramsay screaming about recipes doesn’t really help answer the questions the users need answered.

You really can’t blame Cardi B for just wanting to play her music as Alexa. That’s called exposure, folks. In any case, the internet got a real kick out of Cardi B, both before and during the game.

Some Are Waiting For This To Happen

When can we get Cardi B in the studio to record her Alexa answers?

Many Thought It Was The Best Commercial Of The Super Bowl

Everyone at home ask and report your findings.

Don't worry — Amazon tweeted back and they're looking into it.

Others Imagined How Magical It Would Be IRL

We can only dream of this world, honestly.

Some Want To Know What Google Home Can Offer

I mean, they're not wrong.

Though Cardi B is happy to appear in a Super Bowl commercial, you won't be seeing her on a stage for the halftime show. According to TMZ, when a paparazzo asked Cardi B when she would be performing at football's biggest event, Cardi B replied, "when they hire Colin Kaepernick back." For those of you who don't watch football, in 2016, Kaepernick, then a quarterback for the San Francisco 49ers, started protesting police brutality and violence in America by kneeling during the pre-game national anthem ceremonies. This ignited a firestorm of controversy, to say the least, with other teams and players kneeling and not kneeling. Even the U.S. president felt the need to comment on it. Kaepernick was a free agent following that season, allowing him to be picked up by any other team he wanted to sign with. But... he's currently out of a job, which has some fans (including Cardi B) proclaiming that it's not about Kaepernick's ability (he's a pretty good quarterback, actually) but more his political actions that are keeping him out of a job.

Cardi B is the hottest name in the game right now — hence her Grammy nominations and the fact that she's in a Super Bowl commercial to begin with — but it's nice to know that even though she's famous now, she still has her convictions. And hey, if it doesn't work out with this rap thing, she can always do voiceovers.