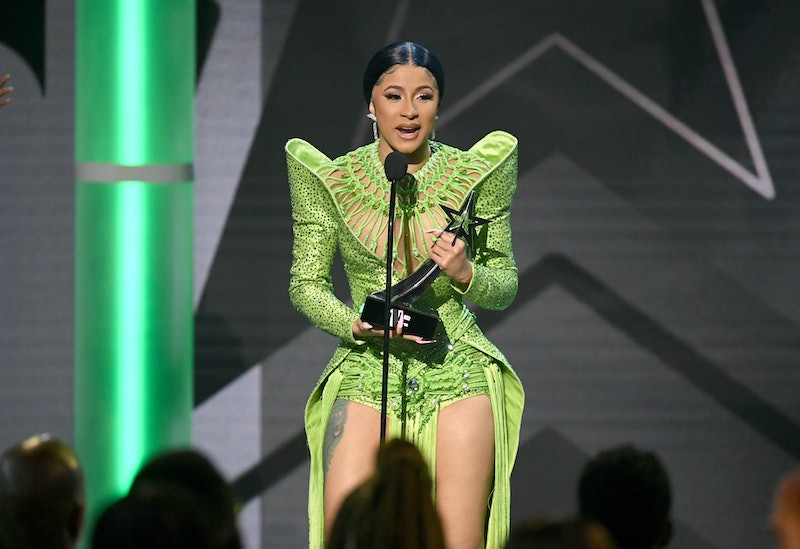 It's already been one year since Cardi B gave birth to her adorable daughter Kulture. And to celebrate the big event, the rapper dropped a new track in honor of her daughter, and it might be her most personal work yet. Cardi B's birthday video for Kulture featured an unreleased track, and it just might be the most adorable tune you'll ever hear.

The rapper first posted the track on her Instagram, soundtracking a slideshow with photos of Kulture, Cardi, and her husband Offset to commemorate their precious baby girl's big day. In the caption, Cardi wrote that the currently untitled song was originally meant for her Grammy-nominated debut album Invasion of Privacy, but didn't make the cut because she recorded the vocals just one day before she turned in the album and couldn't get the take right.

“Thank you everybody for wishing my sweet baby a Happy Birthday," Cardi wrote in her post shared late on Wednesday, July 10. "I made this song one day before I turned in my album and Eve gave me the green light for the beat I was so grateful. She a real one! It didn’t make it on time tho cause as you can hear I was maaa stuffy with a terrible cold. I couldn’t get it right no matter how many times I spit it. Even when we try to mix it u still sound stuffy.”

The newly unveiled song samples Eve's 1999 hit "Love Is Blind," setting Cardi's signature bars on a more laid-back and nostalgic production. The rapper sounds soft and lighthearted on the track, but her lyrics address some heavy issues about life in the public eye, including the media coverage of her pregnancy. The rapper spits, "Hearing public opinions about my private decisions / And there right there, see, is enough to drive you crazy / Complete strangers talking about my baby / Coming from people that never used to check for me / They brought opinions but nothing off the registry.”

Of course, this isn't the first time that Cardi has address her relationship with the media through song. Her most recent single, "Press", tackles the same issue head-on, albeit in a much more abrasive and confident way, criticizing the constant media coverage around her and telling fans that she's doesn't care what the press says about her.

However, despite the media being overwhelming at times, Cardi knows what's truly important in life. In an interview with Harper's Bazaar published in February of 2019, the entertainer stated that when she gets too caught up in what people are saying online, Kulture will remind her where her priorities truly lie. “Sometimes I’ll see something online and it’ll piss me off, and then my baby will start crying or something, and it’s like, ‘You know what? I’ve got to deal with the milk. Forget this'," she admitted.

She kept up the same spirit on Kulture's birthday, celebrating at the stroke of midnight with cupcakes and balloons, as posted on her Instagram. There's no word yet on if Cardi plans on throwing a huge extravaganza for Kulture's big day, as many celebs do, but if that happens, how does one get invited?