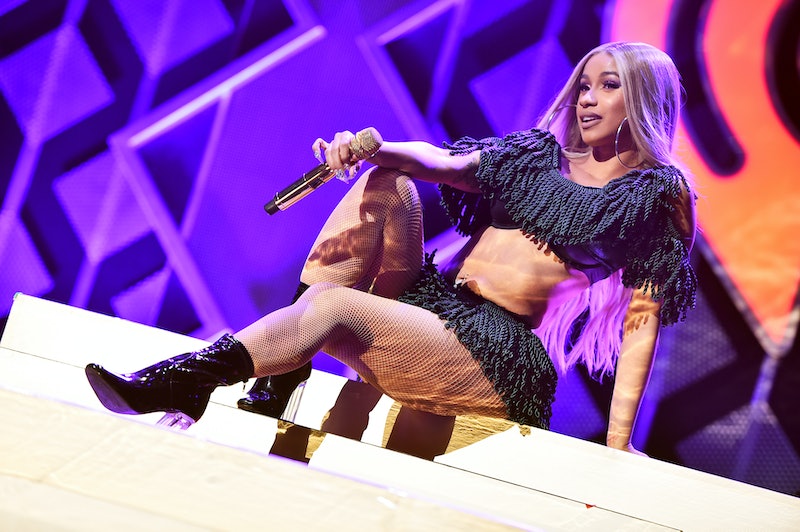 Critics, don't come for Cardi unless you're prepared to get called out. In a series of 3 videos posted on Dec. 30, the rapper made her displeasure at the media known, and Cardi B's Instagrams on the downside of fame prove that she refuses to put up with unnecessary hate.

In the first Dec. 30 video she posted on Instagram, the rapper called out perceptions of celebrity "standards," and said that she refused to conform. "Stop telling me that I need to act like another celebrity ... that's not me," she said. "I'm just doing my motherf*cking job, I'm just getting my coins."

In the second video she posted that day, Cardi confessed that she understands why some celebrities struggle with the after-effects of fame. She explained,

"I remember when I was a regular, schmegular girl, and I used to see the celebrities go into heavy drugs, heavy depression, committing suicide, wanting to die. And I used to think to myself, 'Why do you want to die? I don't get it. You got money, you got fame. B*tch, I'm broke, I want to die' .... But now I get it, though. I get it because people will drive motherf*ckers crazy."

Cardi then assured her fans that, "I'm gonna express myself, I'm not gonna keep this sh*t bottled inside, because y'all ain't gonna motherf*ckin' turn me crazy. B*tch, I'm already crazy." Okurrrrrr!

In her final video, Cardi got ahead of how she thinks her critics will respond, which is basically something like, "if you can't handle fame, then you should quit." Here's the thing, though, as Cardi pointed out. Plenty of people stay in jobs they don't always like, right? You do what you gotta do. And all this media scrutiny is just a negative aspect of her job, like getting up early or working late.

The Bronx-born rapper's rant came just hours after a recent altercation at an airport in Australia, TMZ reported, where one bold photographer made a nasty comment about her marriage to Offset. According to a video of the incident obtained by the outlet, after Cardi landed in Sydney ahead of her performance at the Origin Fields Festival in Perth, the 26-year-old was seemingly confronted by several waiting paparazzi wanting to take her picture. The rapper clearly wasn't in the mood that day, though — which is totally fine and completely fair — and tried to make her way through the airport with a blanket covering her head and face.

While Cardi was making her way through the terminal, one of the photographers in the video called out, "It's no wonder your husband left you." As reported by BuzzFeed, the rapper's friend and publicist, Patience Foster, appeared to confront the woman directly, and then continued to help guide Cardi towards the exit. At one point in the video, Cardi can even be clearly heard begging the paparazzi, "Will you please leave me alone?" Despite her request, the flashbulbs, fans, and followers were unyielding.

Now, Cardi didn't specifically mention the incident or the Australian paparazzi in her videos, though they were posted shortly after the drama went down. It would make sense, then, if the altercation at the airport had fueled her frustrations. And it's also makes sense that Cardi would share those frustration with fans — it's what she's known for.

No matter how you feel about Cardi's music, you have to respect the fact that she always speaks her mind. She's one of the realest ones out there right now, and she's taking down her trolls one video — er, three videos — at a time.