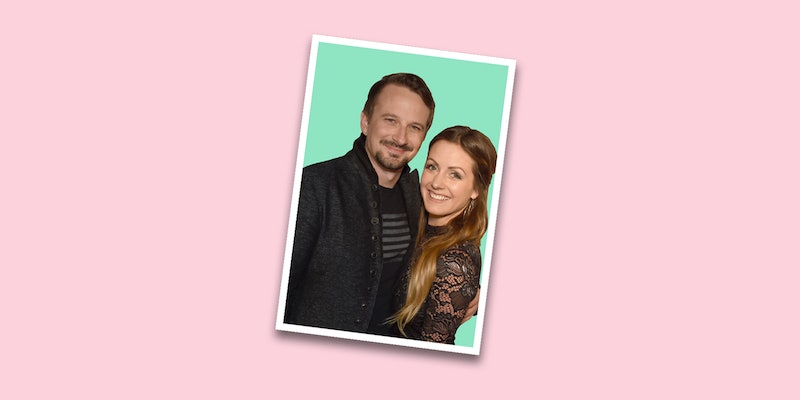 Bustle takes the Bachelor franchise pretty seriously. That’s why we created the Bachelor Nation Class of 2018 — like high school superlatives, but Bachelor edition. Check out what Carly and Evan from Bachelor in Paradise had to say about being awarded "Most Likely To Be A Cute AF Old Couple."

Some people have beautiful, sweet, romantic stories about how they fell in love. Carly and Evan have Bachelor in Paradise Season 3. During the show Carly threw up after kissing Evan, he faked a trip to the ER to get her attention, and she consistently complained about him on camera. Now the pair is happily married with a daughter.

If anyone is the definition of meant to be despite all the odds, it's Carly and Evan. Though they started off on a rocky note, they eventually fell madly in love. Now they're not just Bachelor Nation relationship goals, they're real-life relationship goals. In their wedding vows, Carly even said she couldn't wait "for the day we're old and sitting on our front porch, making fun of how fast the kids drive and how terrible the music is these days."

Though they're both spring chickens still, Bustle has enough faith in their love to declare them the Bachelor Nation Class of 2018's "Most Likely To Be A Cute AF Old Couple."

Carly originally competed on Chris Soules' Bachelor season and then on Bachelor in Paradise Season 2, but she was unlucky in love both times. That is until Evan came around, fresh off a breakup with Bachelorette JoJo Fletcher. From the moment he saw Carly, he was smitten. She... took a little longer to catch feelings.

But the duo eventually bonded over Evan's faked illness as Carly was tasked with accompanying him to the hospital. The incident became a joke between the pair, and Carly even referenced it in their wedding vows, where she promised "to learn CPR, so if you ever fake your own death again I can resuscitate you, which I think you should do when we're in a fight because that would be a really funny way to make up."

Don't worry, the incident also got a shoutout in the couple's superlative acceptance speech:

"Carly and Evan would like to thank the Academy of Bustle Bachelor Superlatives for this esteemed recognition. We humbly accept the 'AF' designation but forbid our kids from using slang like this because it’s inappropriate. There’s not enough time for us to thank everyone but we do want to extend a special thank you to the staff at the Mexican hospital where we first had a good time together. And to Jorge for doling out enough tequila to ensure we stayed in love."