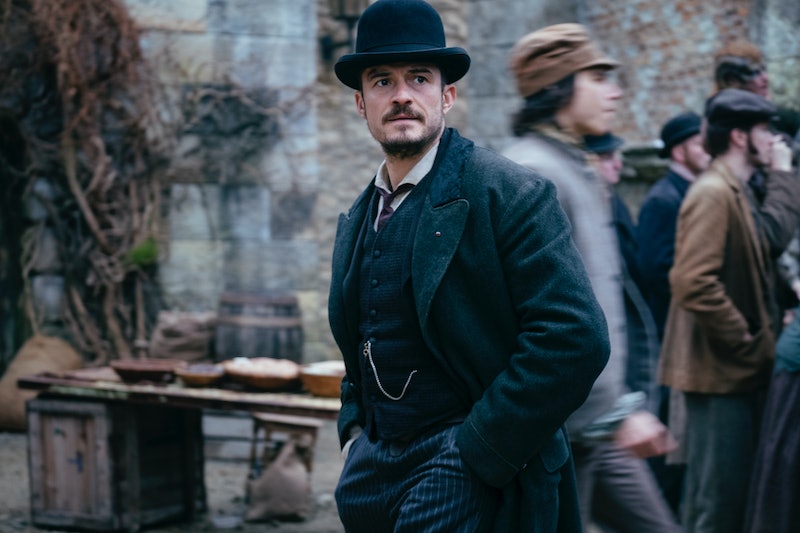 Now that Game of Thrones has left a sizable gap in the fantasy show lineup, Amazon is throwing its hat into the ring with Carnival Row. The new Victorian-era series, led by Orlando Bloom (Pirates of the Caribbean) and Cara Delevingne (Suicide Squad), tells the story of mythological creatures struggling to coexist with humans after their lands were colonized. Unlike GoT, Carnival Row is not based on a book, but that doesn't mean it's without source material: it's adapted from A Killing on Carnival Row, a feature film spec script written in 2005 by series co-creator Travis Beacham.

In the show, Bloom plays a human detective, Rycroft Philostrate, and Delevingne plays a refugee faerie named Vignette Stonemoss. The two hide a secret affair while Rycroft works to solve a case of gruesome fae murders, which may only intensify the existing tensions between creatures and humans.

Reading the script may offer a few hints about where this story might go, but based on the trailer, it's clear the show is a vast departure. In A Killing on Carnival Row, "Carnival Row" is the faerie district in the west, which Rycroft notes is "home of the sordid faerie brothels." In the south is Finistere Crossing, where all the humans and Philostrate live. The script kicks off with a brutal murder of a faerie, who's grabbed from a rooftop at night by a shadowy figure. The rest of the world feels similarly skeevy and rough: Rycroft describes the city as full of "faerie whores and drug peddling dwarves."

In the script, Rycroft is kinder to the mythological creatures than his detective partner, Bottom. He stands in contrast to the world at large and the murders he has to solve, where the victims are all faerie sex workers killed in ghastly ways. The perpetrator is soon named "Unseelie Jack," likely a reference to the 1880s serial killer Jack the Ripper, who similarly targeted only female sex workers.

It's hard to tell how much the show will incorporate this plot. The original idea could certainly use some updating, as it relies heavily on "the dead girl" trope, which crime writers Carolyn Murnick and Alex Segura say in CrimeReads is one of the crime genre's most persistent and problematic trends.

"I think we—writers, usually male—are often tone-deaf when it comes to violence, body count, and what that means or what the consequences are," Segura explained to Murnick on CrimeReads. "It’s easy to just have this beautiful woman as a victim without thinking that you have a responsibility to the reader to not only give voice to the victim but not be…a sicko when describing what's going on."

Based on the trailers, it doesn't seem the focus will be on sex workers, and the victims of the serial killer are both men and women. And unlike in the original spec script — in which Vignette is a faerie who's nearly killed by Unseelie Jack before Rycroft rescues her — in the show the two appear to have a much richer backstory. The setting also seems to be a city recovering post-war, rather than just being a seedy city.

All of that suggests that Beacham and co-creator René Echevarria significantly reworked the script in order to create the series — and considering the original story is 15 years old at this point, that's for the best. The only downside? Fans won't be able to use the script to sleuth for potential spoilers.