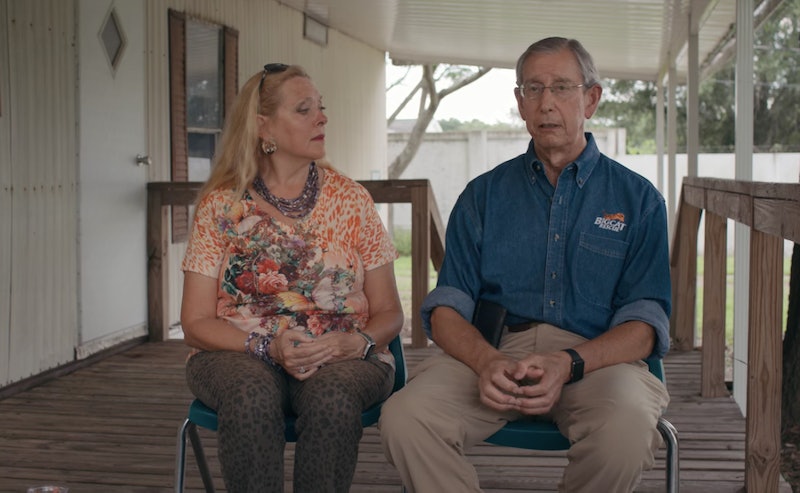 All you cool cats and kittens listen up, because Carole Baskin's husband invited Kim Kardashian to visit Big Cat Rescue. Howard Baskin believes if the Keeping Up With the Kardashians star were to visit the center in Tampa, Florida, not only could she learn about their sanctuary, but that Kardashian would also realize that Carole certainly did not kill her second husband, Jack Donald Lewis, as was alleged by some subjects in Netflix' Tiger King docuseries.

"I doubt if Kim will see this video, but if she were to come and spend an hour with Carole I know she would have her answer and I know what it would be," Howard said in a March 28 DailyBigCat video posted on YouTube. As of publication, Kardashian hasn't responded. Howard's message came after Kardashian started tweeting about Tiger King on March 22. In one of her multiple tweets, she wrote, "Wow the amount of texts I’ve gotten about Tiger King since I tweeted about it all have mentioned their belief that Carol killed her husband! What are your thoughts? Do you think Carol killed him?"

Carole's second husband disappeared in 1997 and was declared dead in 2002. However, as alleged in Tiger King, there are claims that Carole was involved with Lewis' disappearance. Joe Exotic, her rival, even claimed that she may have put Lewis in a meat grinder and fed him to her tigers. There are also other claims that Lewis' body is buried under a septic tank on the Big Cat Rescue property.

Carole has repeatedly denied that she had anything to do with Lewis' disappearance, calling the allegations "the most ludicrous of all the lies" in a March 22 blog. And both she and Howard have criticized Tiger King for its portrayal of them and the accusations about Lewis. Carole wrote in her March 22 blog that directors Eric Goode and Rebecca Chaiklin presented Tiger King as a "big cat version of Blackfish," but that the docuseries turned out to be nothing but "salacious and sensational."

Goode and Chailkin responded to Carole's criticism in a March 26 Los Angeles Times piece. "Carole talked about her personal life, her childhood, abuse from her first and second husband, the disappearance of her ex, Don Lewis," Goode told the publication, in part.

Despite Carole and Howard's opinions, the mystery surrounding Lewis isn't going away anytime soon. Thanks to Tiger King, Hillsborough County Sheriff Chad Chronister is even seeking new leads about Lewis. No doubt Kim Kardashian will be following the news closely.