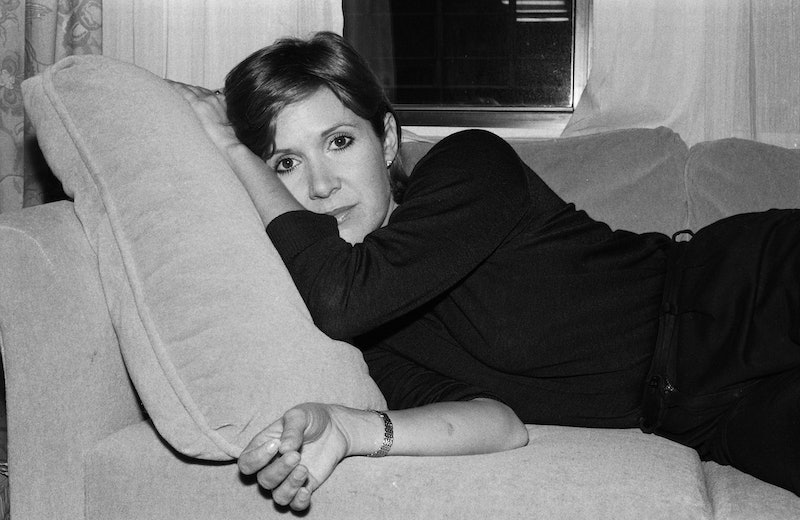 In her 2008 book Wishful Drinking, Carrie Fisher wrote, "I tell my younger friends that no matter how I go, I wanted it reported that I drowned in moonlight, strangled by my own bra." On Dec. 27, 2016, Fisher died following a massive heart attack. Here is the obituary I hope she wanted.

Carrie Fisher drowned in moonlight, strangled by her own bra on Dec. 27, 2016 Earth Time. But what is date and time, really, anyway.

After giving 60 years of wisdom and light to this world, on Tuesday Earth morning Fisher ascended to the stars from Los Angeles, Calif. The actor had suffered a human heart attack on Dec. 23 while on a flight from London to L.A.; four Earth days later, the decision was made, somewhere, somehow, to make the other side her new home.

From her hospital bed, Fisher opened her arms and opened her mouth and closed her eyes and swam up up up past the heads of her doctors and family, past the Hollywood Hills, past the glass ceiling, through the atmosphere, through time, through space, oh shit, through another glass ceiling?, through memory, through galaxies far, far away, until she could swim no more in the light of the moon. She was tired.

Plus, her damn bra kept restricting her.

It's like, why do they make some bras so tight? A woman needs to breathe, you know.

Angels and aliens report they saw Fisher, fulfilled and exhausted by her moonlight swim, pause and float on her back next to a beautiful comet. There, she allegedly wriggled out of her bra, grabbed it by those ridiculously small metal hooks, lassoed it a few times above her head in feminist triumph, and fastened its stupid clasps around her neck to make a cupful cape.

Her sweatpants remained on.

It's unclear whether her bra removal was a response to being told by a man on Earth that space is no place for women's undergarments, but reportedly, Fisher looked thrilled to be released. She was laughing as she grabbed onto the comet's tail and instructed it to get going already.

Beyond space and time, Carrie Fisher is freeing the nipple.

Throughout her life, it was peace Fisher sought. She shone her light on things that were pushed into darkness by others. She pulled many back into the brightness, where there is openness and acceptance for all. There is no reason to believe her ability to help people find the light, even as she floats away, will stop now.

I mean, have you seen Star Wars? Have you read her books? She is a force.

And she's forever with you.