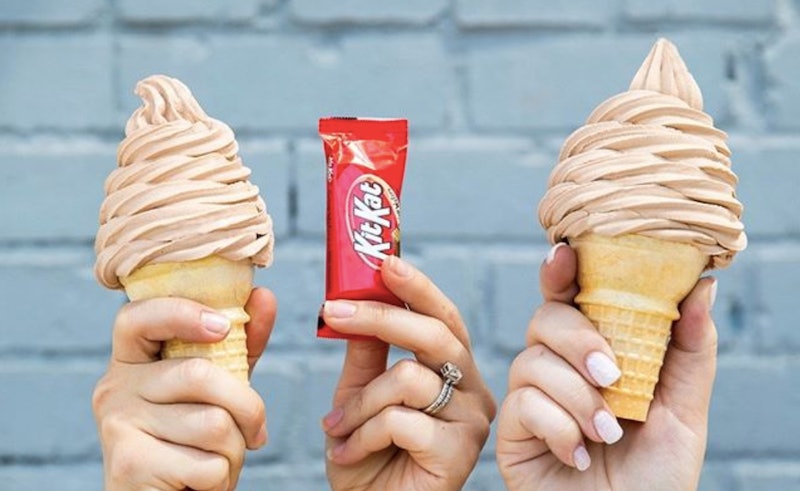 Kit Kat fans, your prayers have been answered. Fall is always a good time of the year for Kit Kat lovers, with Halloween bringing the iconic candy bar back to the foreground. But now, there's an even more exciting new offering — because you can now get Carvel Kit Kat ice cream to transform your fall into a happier, better place. In fact, you can get four Carvel Kit Kat varieties. Get your hands on some Kit Kat Soft Serve, Kit Kat Scooped, Kit Kat Sundae Dasher, or the Kit Kat Shake — or, obviously, try all four.

The Kit Kat Soft Serve is exactly what it sounds like, soft serve blended up with actual Kit Kats to creamy perfection — while the Kit Kat Scooped is a hard ice cream that promises bits of real Kit Kat in every bite. The Sundae Dasher features "layer upon layer of Kit Kat pieces, fudge, and Kit Kat soft serve ice cream all topped with whipped cream", according to the company, which makes it the winner in my book. And, of course, the Kit Kat Shake is all of that creamy Kit Kat goodness you could want, in drink form.

According to Chew Boom, you'll only be able to find these delicious Kit Kat Ice Cream offerings at participating Carvel locations through Nov. 24.

As I said, it's a good time to be a Kit Kat lover. This year has been a true gift for people who love to break themselves off a piece of that... well, you know the rest. We've seen the Kit Kat Duos Mint + Dark Chocolate bar appear this year, which was the first new permanent addition to the Kit Kat lineup in almost a decade. We've seen Dunkin' get in on the Kit Kat action with the Kit Kat Coolatta, the breezy summer treat that was a big hit with fans. And we've already seen that Pumpkin Pie Kit Kats will be making a return to the Halloween scene this year, which is a truly blessed move for both Kit Kat and Halloween lovers alike.

But perhaps the most exciting addition to the Kit Kat scene was bestowed on those who live on the other side of the pond. In a true pinnacle of culinary greatness, we received not one, but two Krispy Kreme Kit Kat donuts this year. A beautiful thing to be sure, but only in the U.K. — and yes, there was an actual bit of Kit Kat on top. Krispy Kreme doesn't mess around with its flavorings and this was no different.

So there's no denying that this has been a massive year for Kit Kat lovers around the world, but the Carvel Kit Kat ice creams are certainly a welcome addition to that. Whether you go with soft serve or scooped, sundae or shake, there are a lot of different ways to get your Kit Kat fix from the maker of everyone's favorite ice cream cake. So get your hands on it while you can, because it's only around until Nov. 24. Chunky sweater fall just got a whole lot sweeter.