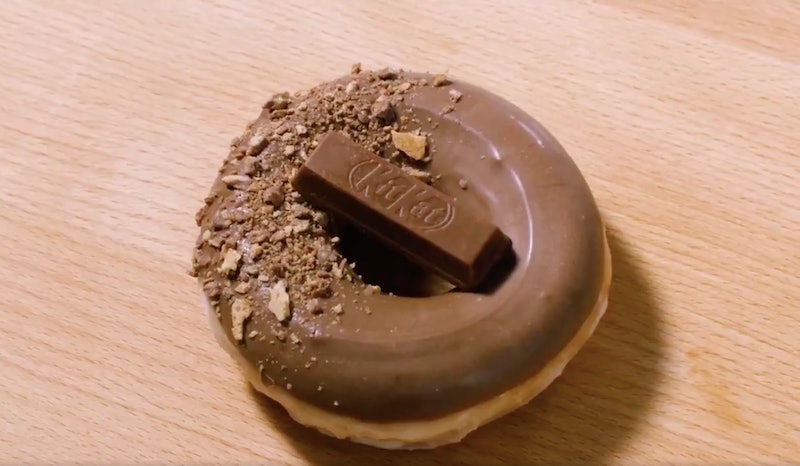 I have great news and I have awful news. The great news is Krispy Kreme is releasing two Kit Kat doughnuts. It is a match made in dessert heaven, a combination deserving of chocolate-covered fanfare, the most iconic of iconic duos. So, you may want to sit down for the awful news: they are only available in the U.K. The agony! The turmoil! The pain my bank account is going to feel when I buy a roundtrip ticket to Europe for doughnuts!!!

In partnership with Kit Kat, Krispy Kreme is releasing not one but two entire Kit Kat doughnuts. ( Again, the doughnuts are not currently available in the U.S., something I will only hold against these perfect candy-doughnut specimens a little bit.) In the spirit of living vicariously through other people’s doughnut lives, let’s meet these two new doughnuts.

Doughnut number one is an Original Glazed Krispy Kreme doughnut dipped in chocolate. The twist? Half of it is covered in crumbled Kit Kat. To top it off, the doughnut is a little milk chocolate Kit Kat bite sitting across the hole. The drama! The elegance! The Kit Kats topped with even more Kit Kats!

The Kit Kat doughnuts will be available at Krispy Kreme locations from August 26 until October 13 in the U.K. (One final moment of silence for our Kit Kat-less Krispy Kremes State-side.) However, if you think Krispy Kremes across the U.S. don’t have some buckwild options, you are sorely mistaken.

Last month, Krispy Kreme released a cake batter doughnut that looked and tasted exactly like how a birthday feels. The Original Glazed Doughnut was decorated with strawberry icing and festive, multicolored sprinkles. The pièce de résistance? The ring of birthday cake batter that filled the entire doughnut. The boldness! The beauty! The bounty of cake batter!!! You may have noticed I’m using past tense. That’s because the cake batter doughnuts were only released for a limited amount of time in July. ~*NoThIng LaSts FoReVeR*~

If it is candy-themed doughnuts you crave, you are in luck. Starting August 5, Krispy Kreme has two Reese’s doughnuts for a limited time only. Peanut butter! Chocolate! Doughnuts! Your favorite trio could never!!! There’s the Reese’s Original Filled Peanut Butter Lovers Doughnut, which is a chocolate Original Glazed doughnut filled with Chocolate Peanut Butter Kreme. The Peanut Butter Lovers Doughnut is then dipped in Reese's peanut butter icing and topped with a chocolate icing drizzle. Wowie, baby, I need to lie down.

Krispy Kreme has also been testing create-your-own doughnuts in Concord, North Carolina. Starting July 23, at the select Krispy Kreme location, guests can “build their own doughnuts with a combination of five different glazes, 10 toppings and five drizzle flavors.” That adds up to an incredible 250 different doughnut combinations for you to choose from. While the press release doesn’t specify specific toppings, glazes, or flavors the options include, that doesn’t need to stop you from dreaming of concocting your own DIY Kit Kat doughnut. Bon appetit, my sweet toothed friends.