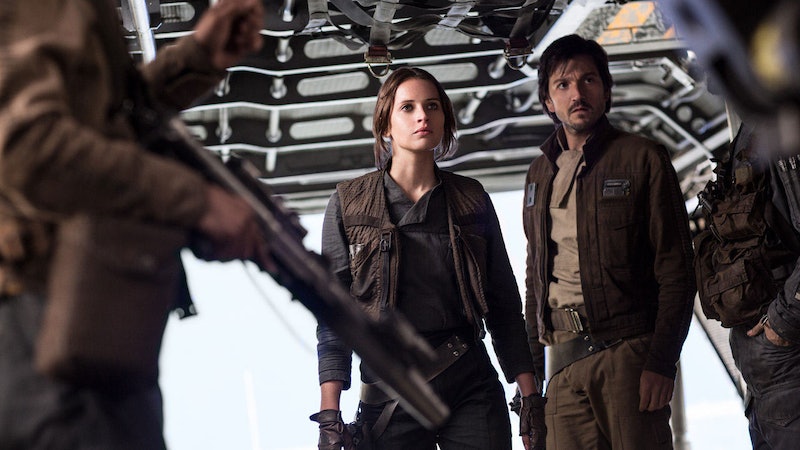 Han and Leia, Anakin and Padmé, Finn and Poe (Finn and Rey? Finn and Poe and Rey?) are all iconic Star Wars couples in their own, unique ways. With every new Star Wars series, there must be a new couple to ship, and while Rogue One: A Star Wars Story fans have latched onto Baze and Chirrut as the ultimate Rogue One couple, Jyn and Cassian are not to be overlooked. Set up as a kind of will-they-won't-they couple, Cassian and Jyn (spoiler alert) never actually get together (though I fully maintain they have sex in the Imperial elevator on Scarif). Still, they're one of the best couples in the franchise, because Cassian and Jyn are Star Wars' first romance of equals.

Known to the interwebs by their ship name, 'RebelCaptain', the duo don't start out as equals, not unlike Han and Leia or Anakin and Padmé. When they first meet, Jyn, the very definition of an independent woman, is forcibly taken from Imperial custody by the Rebels, while Cassian is a Rebel spy put in charge of taking her on a mission. When the two are on the Rebel base, Cassian is clearly in a position of power. And, as they set off on their mission at the beginning of Rogue One, Jyn is, for lack of a better term, released into his custody to go to Jedha, a war zone. So, yeah, it's not exactly equal between them.

However, the power dynamic shifts very clearly as soon as they take off toward Jedha, when Cassian literally allows Jyn to keep her stolen weapon. The second Jyn has a gun in her hands, Cassian isn't so much in charge as he is taking the lead. This trend continues as the duo land on Jedha and make their way to see Saw Gerrera and embark on their journey to find Galen Erso. By the time they're in battle fighting for their lives at the end of the film, neither Cassian nor Jyn truly has power or rank over the other. They are equals both on the battle field and off, a dynamic completely foreign to past Star Wars couples.

Take Anakin and Padmé, who were, like Leia and Han, constantly on different power levels. First, Padmé's political stature overshadowed Anakin's Jedi-in-training status, and then Anakin's evil Jedi took over not just their relationship but the galaxy. Suddenly, Padmé wasn't a strong politician, but a distressed, pregnant wife, and any hope of the two ever reaching equal ground was dashed. Similarly, Han and Leia, despite being the most beloved Star Wars couple of all time, were barely ever seen or treated as equals. (I've said it before, and I'll say it again, Han Solo is kind of a jerk.) Leia's political power over Han was obvious (and, admittedly, pretty awesome), but his constant belittling of her political stature undermined her importance to the Rebellion and the plot of the films overall. It takes two movies for Han to start treating Leia like a true equal, but it takes Cassian half an hour to respect Jyn.

Rogue One's Jyn and Cassian give Star Wars fans a completely new kind of couple. Neither of them are politicians, which means they're on the same playing field as soldiers in the Rebellion, and even though Cassian has a more official title (he's technically the man in charge for most of the film), it's Jyn who inspires people to go into battle. Cassian has the technical skills to lead, while Jyn has the ability to inspire. Furthermore, on the battlefield, they are perfectly equal. Jyn doesn't need Cassian to save her or show her how to use a gun, and Cassian doesn't need her to save him, either. They can take care of themselves, which only makes me ship them harder as a couple.

Still, Jyn and Cassian don't need to be together in Rogue One to be well-formed characters. As Rebels, they are better together, but their romantic tension isn't crucial to their characters or their journey to steal the plans for the Death Star. Sure, it's disappointing to my RebelCaptain shipping heart that we never get to see Jyn and Cassian get it on, but I didn't need to see that to fall in love with the characters and root for them in the film.

Now, if you'll excuse me, I'm going to go read all the RebelCaptain fan fiction my heart can possibly handle. I suggest you do the same.