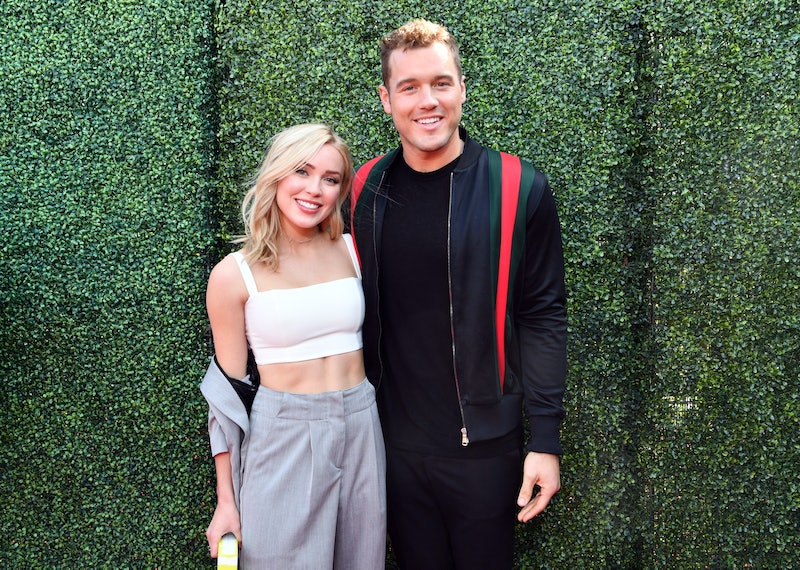 Bachelor couple Colton Underwood and Cassie Randolph are still going strong, and they don't want there to be any doubt about that. On Instagram on Wednesday, Sept. 25, Cassie addressed recent Colton relationship rumors with a lengthy post about their life post-Bachelor. She not only defended her relationship status, but also shed light on what it's like to date someone in such a public fashion.

In the caption, Cassie told her fans that due to "some rumors and an article that came out this week," she wanted to clear some things up. And since there wasn't enough room in the actual caption, she took a screenshot of the lengthier message she had for everyone. "I just wanted to take this time to be very transparent with you all," the former contestant began. "This past year has been nothing short of amazing and life changing. I'm so grateful for all of the new things, but it's also meant a lot of change and change isn't always easy."

She went on to make one thing abundantly clear: The couple's relationship is in a "good place," despite any suggestions to the contrary. Cassie wrote, "Colton and I are are very happy... Is our relationship perfect? No, it is very normal with its ups and downs and compromises." Later in her post, she once again stressed, "We are good!"

Cassie also noted that her relationship has faced extra pressure because of the time they spent on The Bachelor. She continued, "Our every move together is analyzed and every word is dissected. At times it can feel like our relationship status isn't just a matter of our own happiness, but other people's happiness too." Lastly, the reality star mentioned that the focus on whether or not they'll get engaged has been an "unnatural aspect of our relationship." She rightly pointed out that other non-famous couples tend to not face the same amount of scrutiny about whether they're taking that major next step.

While she didn't specify which rumors she was addressing, there was a recent Us Weekly article published hours before Cassie posted her Instagram. Directly tying into her remark about the pressures of getting engaged, the report claimed that Colton was ready to propose, whereas Cassie was not ready just yet. A source even told Us Weekly that they were dealing with mismatched feelings, just as they did during their time on The Bachelor, “At the moment, he definitely has stronger feelings than she does, though... The thought of taking the next step in their relationship scares her at times because she is still very young.”

Now that Cassie cleared things up, her partner is addressing the rumors in his own humorous way. On Instagram Story on Thursday, Colton posted a photo of his girlfriend and made light of all of the engagement talk by writing, "I got that Neil Lane for her left hand." Although, the Neil Lane piece in question wasn't an engagement ring. As seen in the photo below, the "Neil Lane" that Cassie is sporting just so happens to be a coffee cup from the jeweler's dish collection.

Like Cassie, many other Bachelor stars have been open about the struggle of navigating their relationships post-reality TV. Former Bachelorette Kaitlyn Bristowe opened up about this in Cosmopolitan in May. When asked about how she felt about ending her engagement to Shawn Booth (whom she became engaged to at the end of her season in 2015), Kaitlyn said the 2018 breakup was especially difficult because of all the public attention.

"It was really tough because there are so many people who believe in your relationship and who don't see the things that go on behind closed doors," she told the magazine, echoing Cassie's recent comment. "But it becomes their business, because they're so invested in the show and you as a couple."

Like both Cassie and Kaitlyn acknowledged, it's particularly difficult for Bachelor couples to navigate their relationships publicly. But regardless of what any reports have suggested, Colton and Cassie are in a good place at the moment. And just as the reality star said herself, they're not going to let any negativity get in the way.