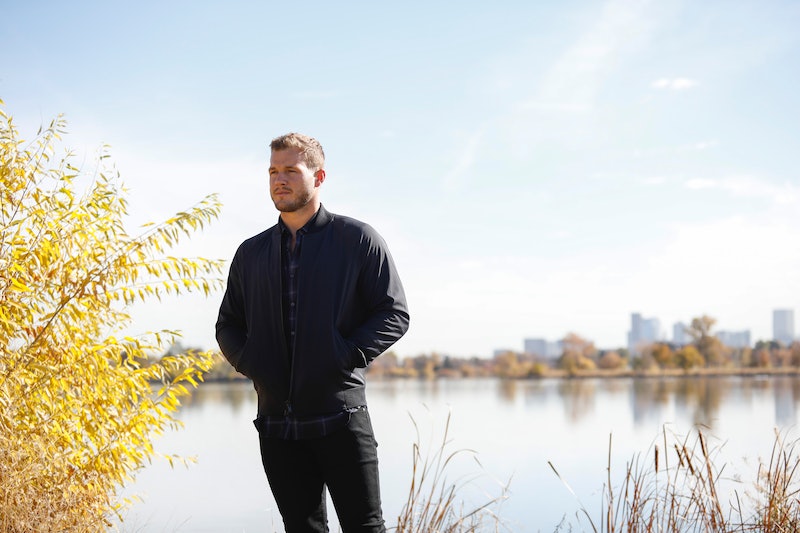 On Monday night's episode of The Bachelor, Colton Underwood's leading lady, Cassie Randolph, gave him the classic "I love you, but I'm not in love with you" speech. Anyone who's ever heard a variation of that line knows how much it hurts. And even though plenty of people have had their hearts broken on Bachelor Seasons past, Colton had an unprecedented reaction on Season 23 when he jumped the fence in the March 4 episode, seemingly to quitting The Bachelor the week before the finale. Well, he didn't quit, but Colton has since spoken about Cassie's surprising Bachelor exit that will break your heart all over again after the twist on Monday's episode.

Colton didn't just let Cassie go, as is customary on The Bachelor when contestants decide their hearts aren't fully in it. He actually begged her to stay, despite her massive doubts. He even said that he'd fight for her after the show ended. "I think making that statement is something I would make in any relationship that I'm in. You have to choose to love somebody, you have to choose to fight for anybody you're in a relationship with," Colton explained to Entertainment Tonight in an interview published after the fence-hop aired.

The former NFL player added, "I think that's what love is, and that's what being in a relationship is all about." That may be what love and relationships are about, but it's not really what The Bachelor is about — this is reality TV love after all — and now it's unclear how the show could even go on for its finale next week with Hannah G. and Tayshia left as the final two contestants.

In another interview with Us Weekly, Colton explained how he ultimately came to the decision not to quit the show, a choice which was apparently aided by the sagacious Chris Harrison. "The story goes on and the show goes on and I think that I had a realization, ‘Life is not fair’ to myself," Colton told Us. The 27 year-old said that he talked with Harrison about, "Where do we go from here?"

Colton then told Us that he got a second opinion after speaking with Harrison, turning instead to his father. "Having a conversation with my family and my dad really helped put things into perspective. It was like, ‘You owe this to yourself and you owe this to these women to really explore and see where to go from here,'" the Season 23 Bachelor said.

Bouncing back from a rejection is never easy, but it's especially rough if you've already experienced it before on TV, which Colton had on Bachelorette with Becca Kufrin. While talking with ET, Colton revealed that his breakup with Becca had factored into his reaction to Cassie's exit. "The toughest part was, is I fall back into what I talk about with Becca, and being in a relationship in which the feelings aren't reciprocated at the same level," he said. "Not being on the same page is something I was fearful [of], so that was very hard to hear. It was."

If you thought that Monday's episode of The Bachelor had a dramatic turn, next week's episode will include a Bachelor on the run, as Colton continues his journey post-fence jump. Fans will also probably get a little extra helping of drama on the "Women Tell All" special on Tuesday, March 5, and maybe even some closure. After all Bachelor viewers almost went through a heartbreaking breakup with Colton themselves, closure sounds good... Unless it's a literal closure like a fence, because that might not suffice.