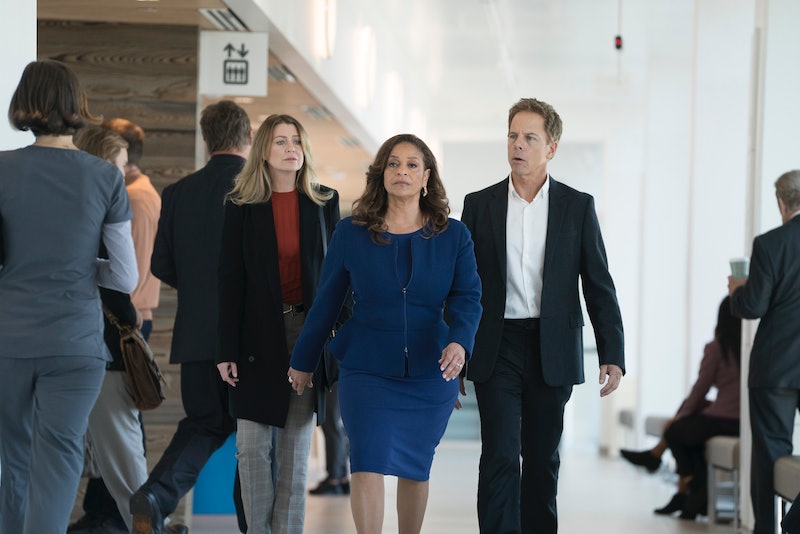 One may not think of Catherine Avery as a main player on Grey's Anatomy, but really, many of the clan at Grey Sloan hospital has come to depend upon her. She's Richard's wife. She's Meredith's pseudo-mentor. She's Jackson's mother. She helped save the hospital, and she's a pioneer. Now, though, Catherine has gotten a cancer diagnosis that may send everyone else reeling.

When Catherine sends for Koracick and Meredith to come to the opening of the Catherine Fox Foundation, they go, of course. There's a private plane and a very special patient that these two top-tier surgeons must go assess. Is it Bono? Is it Susan Sarandon? Nope, the patient is someone that Koracick and Meredith know much more intimately — it's Catherine herself. She's had pain in her legs, and, after a series of tests, Meredith and Koracick figure out that it's bone cancer. And it's bad.

Catherine, true to form, remains strong. She tells them that she's been through more than enough — a bad marriage, the threat to her foundation, racism and sexism as a black woman with a medical degree — to be scared of a little cancer. She can handle it because she's Catherine Freaking Avery, and has Webber and Jackson to support her if needed.

Normally, this would be true. Catherine would fight this cancer with her family by her side, because they would be there to support her. But right now, Richard and Jackson are facing their own big-time struggles of their own.

Richard's AA sponsor, Ollie, died last season, and Richard is still spinning from her loss. When his favorite nurse, Frankie, dies in a freak health scare, Richard, who was already really close to losing it, does. Frankie's death turns something in Richard, and when he goes to an AA meeting and hears that a local bar is trading drinks for sobriety chips, he heads there. Now, you may be thinking — no, Richard! Don't drink! Well, after he gets eight shots of vodka in in exchange for his eight-year chip, he decides not to drink. But he does have a violent outburst that leads to his arrest.

A baseball bat is a useful weapon for smashing bottles, and Richard lets his frustrations loose on the bar, crushing it all to bits and condemning the bartender for preying on people in a moment of weakness. In the last moments of the Nov. 8 episode, Richard is calling Meredith because he got picked up by the police. "Don't tell Catherine," he says. So they're both starting the mid-season finale keeping secrets from each other that will have to come out eventually if they want to take care of each other. Jackson's no better off these days, either.

Jackson is still going through his crisis of faith, and he's lamenting the fact that he and April could never agree on God and that it ruined his relationship with her and Harriet. Now that Jackson is searching for theological answers, it would be the only time that he and April would have worked out — except she's happy and married. Maggie is mad that Jackson is talking to April (this is unwarranted, because she's his ex-wife and mother of his babies) and another women (warranted, because Jackson's being shady), and she doesn't know if they should break up.

So, Jackson and Richard have had their share of respective problems that are not as life threatening as Catherine's diagnosis, but scary all the same. All three of them are unmoored at the same. One person in a family has to be the anchor, because without that person, it all gets washed away. Catherine usually plays that role, but it might be time for one of the men in her life to step up and take a little charge — if she'll let them, of course. In any case, things for the Avery-Weber bunch are about to get a whole lot harder before they get easier on Grey's Anatomy.

More like this
Ellen Pompeo & Patrick Dempsey Just Showed Why They Should Team Up Again
By Brad Witter
'House of The Dragon' Episode 6 Will Take Place A Decade After Episode 5
By Kadin Burnett
The ‘Emily In Paris’ Season 3 Release Date Is Here, Plus The First Footage
By Bustle Staff
The ‘You’ Season 4 First Look Shows Joe’s New Identity And Potential Victims
By Bustle Editors
Get Even More From Bustle — Sign Up For The Newsletter