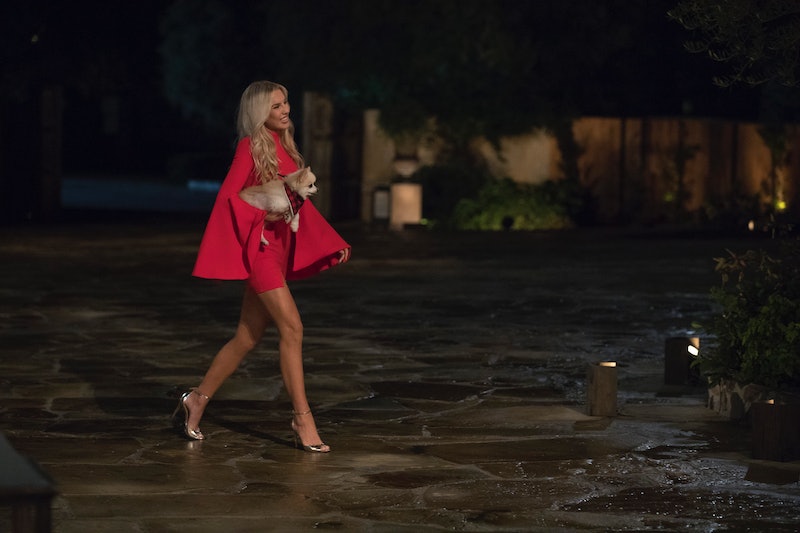 It has long been a national disgrace that the Bachelor mansion does not have a house dog, but for a few glorious moments during this season's premiere, that pup-sized hole in our hearts was filled. Catherine's dog Lucy on The Bachelor was a treat for all of us, and I for one would like her to stay forever. The Pomeranian had a brief bonding session with Colton as Catherine made her entrance to meet the famously dog-friendly Bachelor and she ended up spending the rest of the evening with Chris Harrison.

I want to know everything there is to know about Lucy immediately, and Catherine's Instagram feed is distressingly unhelpful — only one photo of the pooch exists among the contestant's mere 24 photos. It's also unclear if Lucy will stick around in the mansion — she obviously showed up with Catherine to make a memorable first appearance for her owner, but questions remain about whether the mansion is pet-friendly. Is the Bachelor mansion properly equipped for furry friends? Who would give her attention as all the weeping and backstabbing unfolds? Is anyone allergic? Would Colton abandon finding a wife altogether and just choose to take home Lucy?

Host Chris Harrison and Lucy took a stroll of her own — perhaps dogsitter could be added to his resume if Lucy does stick around.

We don't know if Lucy will stick around until Catherine is sent home, but I'm inclined to think she will be headed home just as soon as she arrived. It'd be unprecedented for a pet to be running around the mansion, and honestly, it would probably throw off the entire production. Who could possibly care about flirting, going on dates, and putting in all the work necessary to find a spouse, when you could just pet a dog instead?

Regardless of if she'll be a staple of this season, Lucy's owner is sure to be. Catherine had some early buzz that she might become the "villain" of this season, though as all Bachelor fans know, that's got a lot to do with how her edit turns out. But per E! News, Harrison said Catherine might break a franchise record for how many times she pops in to "borrow" Colton from other women.

Colton will probably remember Catherine for some time to come, regardless of if a romantic spark is there — he's a huge dog lover. He can often be found on Instagram cradling canines who are almost as big as he is, and allowing his pets to hog the entire couch. He certainly wouldn't mind if a dog was around for good during filming.

But pups aren't the only ones he wants to share that couch with — he's here to finally lock down the romance he searched for with Becca Kufrin and on Bachelor In Paradise. “This is the perfect time in my life to do this,” Colton told People magazine. “I’m so unbelievably happy with myself and now I can focus on finding my wife. I’m so excited to find that. My heart is 100 percent healed and I’m going to give this my all. And hopefully I’ll come out of it engaged!”

Only time will tell if Catherine will go the distance, and if Lucy will be joining the ranks of Colton's much bigger dogs at home. But fans got to bask in her glory for a little while, and that's a plus no matter what.