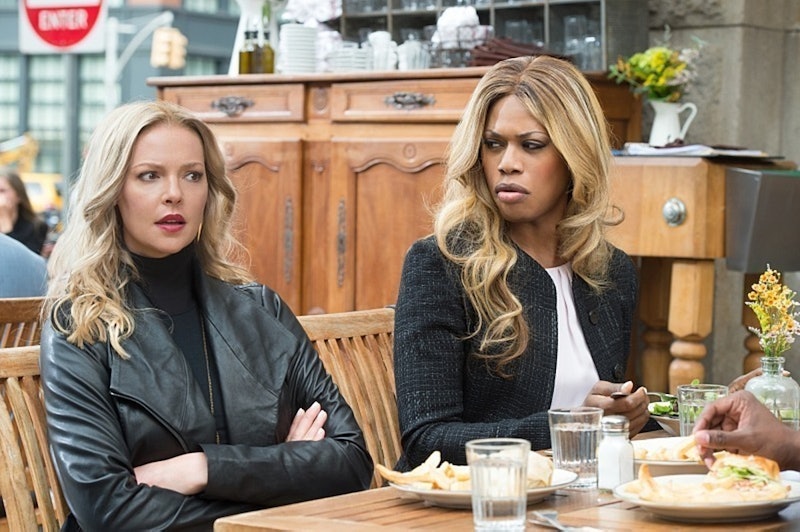 Well, that was fast. After airing just two episodes, CBS has cancelled Doubt, and all I can hope is that we'll get to see more of Laverne Cox in the near future. Like, seriously though, what the hell happened here? No sooner than it began airing just two weeks ago, the Katherine Heigl-led primetime drama has already managed to somehow land itself on the cutting room floor. Heigl might not have the best track record when it comes to television shows, but Cox is a guaranteed delight in any role that she's in. So when will we get to see more of Cox on our TV screens?

With the entire season already filmed, it's unclear whether or not the remaining 11 episodes of the first season of Doubt will ever get to see the light of day. But I'll tell you one thing that is certain: Laverne Cox will be returning to Season 5 of Orange Is The New Black, and I seriously can't wait for it to begin streaming on June 9.

It seems that no matter what she does, Cox always comes off as a bit of a superhero. Even when she's not on-screen showcasing her amazing talents, she can most certainly be found advocating for the rights of those in the LGBT community. Doubt was, in fact, an intersection of both; her role as Cameron Wirth made Doubt the "first broadcast series featuring a transgender series regular character played by a transgender actor."

It's also worth noting that she also was the first transgender person to be nominated for a Primetime Emmy Award for acting. This woman is literally is kicking down doors and shattering stereotypes, so I don't doubt that we'll see her in more projects soon enough, Orange Is The New Black aside.

So, although her latest gig has, sadly, been cancelled, there's still a silver lining. Her career is literally on fire, and anything that she does is done with an admirable fervor. This setback won't even slow Cox down.

More like this
The 'Reasonable Doubt' Cast Includes A 'Save The Last Dance' Reunion
By Grace Wehniainen
Constance Wu On Self-Doubt, Family Drama, & Her Sister's Unwavering Support
By Constance Wu
At 14, Jurnee Smollett Was Taking Meetings With Missy Elliot & Lauryn Hill
By Chloe Foussianes
Shonda Rhimes' Net Worth Makes Her One Of The Wealthiest People In TV History
By Hugh McIntyre
Get Even More From Bustle — Sign Up For The Newsletter