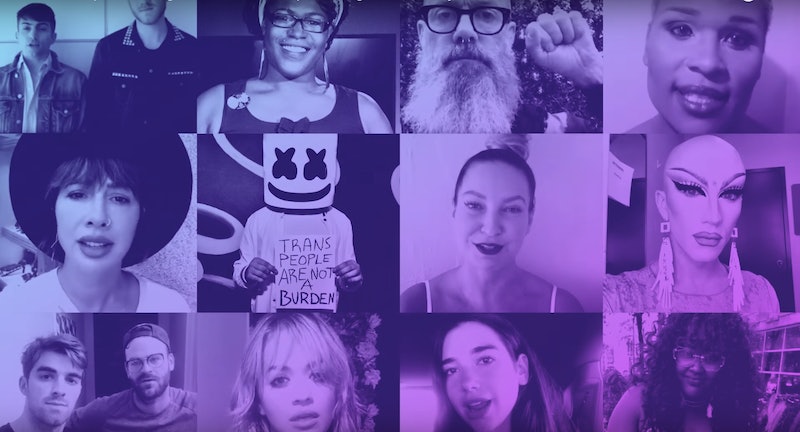 On Wednesday, President Trump tweeted that transgender people would no longer be allowed to serve in the military, and the pushback from American citizens and politicians alike was immediate. Now GLAAD and Billboard have teamed up to produce a moving video featuring celebrities speaking out against the proposed trans military ban and supporting the transgender community. The video brings together artists like Sia, The Chainsmokers, and Rita Ora, alongside popular RuPaul's Drag Race contestants, including Peppermint, Sasha Velour, and Bob the Drag Queen. President and CEO of GLAAD, Sarah Kate Ellis, appears at the end to reiterate the immense contributions transgender service people make to the military.

The full script of this short, but important video reads,

"Transgender rights are human rights. This is a fact. By banning transgender people from openly serving in any capacity within the United States armed forces, President Donald Trump undercut the brave efforts of an estimated 15,000 patriotic transgender Americans who are currently serving our country. Transgender people have served honorably for decades and the current policy works fine. The cost of care to transgender troops is negligible, but their duty and service is priceless. Transgender people fill critical military roles and removing them from their units will disrupt core military missions. To our friends in the transgender community, we support you, we love you, we stand by you."

In his tweets, Trump claimed that, "Our military must be focused on decisive and overwhelming victory and cannot be burdened with the tremendous medical costs and disruption that transgender in the military would entail." He offered no statistics to back up his claims.

Since former President Obama's administration lifted the ban on transgender people openly serving in the military in June 2016, it seems there have been very few problems or instances of discrimination, according to Matt Thorn, the executive director of OutServe (an LGBT military advocacy group). Thorn told Huffington Post, "We have members leading commands and elite teams. We have had no issues. We were stunned to see the president's tweets this morning. I'm flabbergasted."

At this stage, it is unlikely that Trump's ban is legal, and it would be a costly matter for the government to pursue. The Joints Chief of Staff at the Pentagon have refused to implement the ban without policy guidance, and even some Republicans, like Senator John McCain, are making it clear that they stand with the transgender community. Even if the ban is unenforceable, it could still put transgender people serving in the military at risk for undue discrimination. That makes it all the more important that everyone, including celebrities, pull together to support the rights of transgender people everywhere.

It's also worth noting that Jackie Evancho, who sang at Trump's inauguration, appears in the video alongside her sister, Juliet, who is a member of the transgender community. The example that the Evancho sisters and the rest of the celebrities present in the video set is so vital at this time. Whether or not the transgender military ban is legal or not, the community is coming under attack from the highest office in the land, and it's up to citizens everywhere to say a firm no to discrimination.