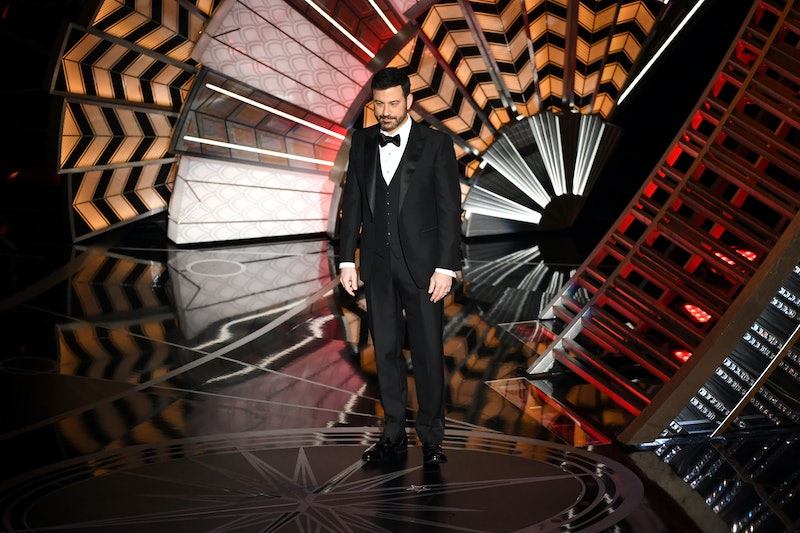 In addition to those coveted golden statues, the 2017 Oscars distributed another surprise. Jimmy Kimmel had candy drop into the audience on Sunday night via little parachutes and celebs reacted to the 2017 Oscars candy parachutes in the cutest ways. According to Kimmel, inside these cute little packages from above were Red Vines and Junior Mints — you know, the most beloved movie theater snacks there are. And when these cute little parachutes fell from the top of the Dolby Theater, the celebs in the audience couldn't help but look so excited.

I don't blame them at all for finding this magical candy as pretty awesome. I'm sure the Oscars offers up a sophisticated menu of snacks, but would Red Vines and Junior Mints be on that menu? I'm not sure, but thanks to Kimmel, they totally are now. This is also not the first award show food comedy bit that Kimmel has done — while hosting the 2016 Emmys, the comedian and Jimmy Kimmel Live! host handed out peanut butter and jelly sandwiches, which were made by his mother, to the audience. Sure, celebrities enjoy that treat, but they seemed adorably delighted by the Oscars' parachute candy.

Check out the celebrity reactions below.

And the Hidden Figers star is so excited.

The Hacksaw Ridge star acting like this happens all the time. Look at that sly catch and toss.

Ryan Gosling Staring Up At The Heavens

He looks so pensive as he considers the candy.

Because sharing is caring.

The Candy's Reaction Is Pretty Great, Too

You know, swinging in the air, glowing and achieving their dream of landing in movie stars' laps. Dreams coming true — isn't that what the Oscars are all about?