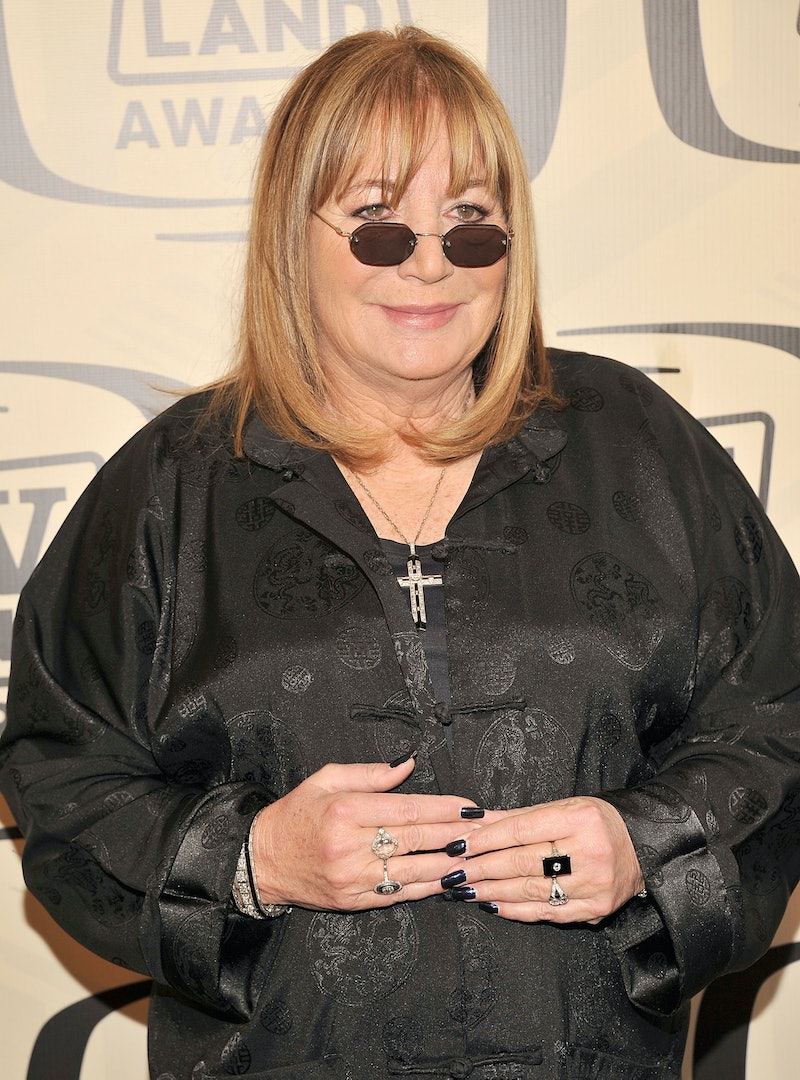 On Tuesday, Dec. 18, The Daily News reported Penny Marshall died at the age of 75. As you can imagine, there are many celebrity tweets about Penny Marshall's death honoring the legendary actor and director who paved the way for so many women. Marshall wasn't only a true star in front of the camera, but also behind the camera as an extremely talented director.

Michelle Bega, a spokeswoman for Marshall's family, confirmed the sad news about Marshall on Tuesday. "Yes she did [die] … peacefully at her Hollywood Hills home," Bega said. "She passed away from complications from diabetes." The Marshall family also said in a statement given to The Los Angeles Times, "Our family is heartbroken over the passing of Penny Marshall."

Marshall's death is a massive loss. She's best known for directing films like Big, The Preacher's Wife, Riding in Cars With Boys, Awakenings, and, last, but certainly not least, A League of Their Own. She was also, of course, well-known for her comedy gold in the Happy Days spinoff, Laverne & Shirley.

But, it's her directing that will forever standout and mean the world to many. As reported by The Times, Big, the 1988 film starring Tom Hanks, "made Marshall the first female director in Hollywood history to direct a movie that grossed more than $100 million." She's a legacy, that's for sure.

Now, many celebs are recognizing the late Marshall on Twitter with tweets shining a light on the mark she left on Hollywood.

There are no truer words.

Bialik hits the nail on the head.

The Love & Basketball writer and director relates to Marshall on so many levels.

Beautiful words from the well-known director.

The Simpsons showrunner will never forget her.

She really was "tough as nails."

A "pioneer" that's for sure.

She really should be studied in school.

She was a huge influence.

A true inspiration for women of all ages.

From one director to another.

She impacted his life greatly.

Her tweet also references Marshall's brother, Garry Marshall, who died in July 2016 at 81. He was also a major talent with directing films like The Princess Diaries, Pretty Woman, Beaches, and so many more.

This is a lovely memory.

He would audition over and over again for her.

A huge thank you from Viola Davis.

This is the kind of influence Marshall had.

Can you imagine having Penny Marshall's support? That's something Witherspoon will never forget.

Can you imagine growing up knowing Penny Marshall? Wow, what an impact she obviously had on Colin Hanks' childhood.

And, finally, a tribute from Tom Hanks, who starred in both Big and A League of Their Own. One can only imagine how many laughs he shared with Marshall.

Even though she's gone, Marshall will always be a powerhouse in the eyes of many. Women filmmakers across the globe continue to break barriers, but, unfortunately, there's still a lot of work to be done. That said, thankfully there were women like Marshall who came before them fighting the good fight. Marshall will surely never be forgotten for both her acting and directing legacies.