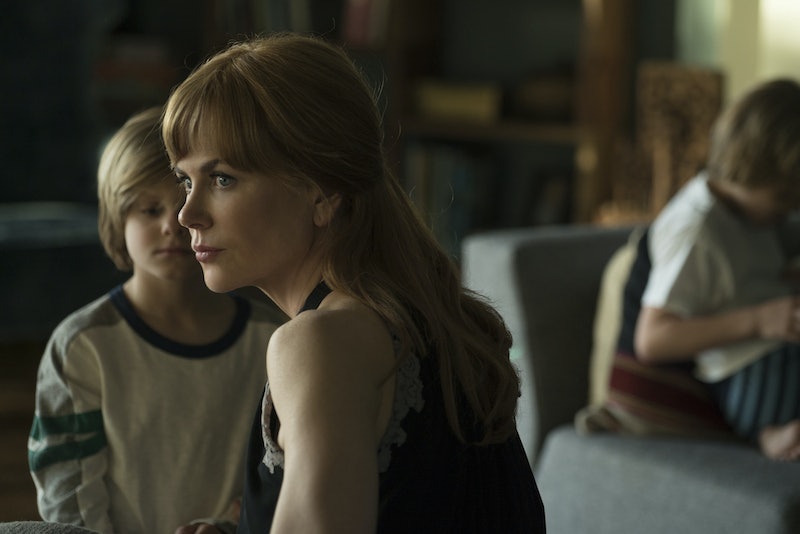 Spoilers for the Big Little Lies Season 2 premiere ahead. Since its premiere, Big Little Lies has been praised for its realistic, nuanced portrayal of domestic abuse. In Season 1, we were introduced to Celeste at a time when she was still dismissing and downplaying Perry's abuse. Her journey to make that recognition created a wrenching portrait of how hard it can be to leave an abusive situation — or to even decide that you should. Only in the final few episodes did she admit to herself how bad things had gotten, and, what felt like moments later, Perry died. In Big Little Lies Season 2, Celeste is physically free of her abuser, but her grief — and ongoing attachment to the man she loved — prevent her from letting go of him entirely. Even in Perry's death, Big Little Lies continues its thoughtful and layered depiction of the complicated relationships victims have with their abusers.

Per the National Coalition Against Domestic Violence, it's not at all uncommon for victims in an abusive relationship to feel like Celeste. Victims frequently report continuing to love the person who abused them, and express that they "want the abuse to end, but not the relationship." We saw some of this dynamic with Celeste in Season 1, when she urged her therapist to understand Perry's good traits and balked at the idea that incidents of abuse were worth losing her marriage over. Even now that Celeste has realized she needed to leave Perry for her own safety, her love for him hasn't disappeared.

In Season 2, Celeste is actively grieving Perry: she fantasizes about them together in love, playing with their children. She can logically remember what Perry did — "he raped you," she tells Jane firmly in an earlier scene — but she didn't only lose her abuser. She lost her husband. Or perhaps more accurately, she lost the illusion of her husband that she'd worked so hard to preserve during their marriage: the man who was perfect except for one tiny but explosive flaw. "Are you glad that he's dead?" Jane asks in that same scene. "It's complicated," Celeste replies.

The National Domestic Violence Hotline reports receiving many calls from victims who have left their relationship, but continue to love and miss their abuser. Per their website, these feelings of love can come from remembering the "good times" in a relationship, as Celeste is clearly doing with Perry. It can also be a survival technique: it's extremely painful for victims to recognize that "someone they love, and who claims to love them, could harm or mistreat them," states the hotline's site. "To cope, they detach from their pain or terror by subconsciously beginning to see things from the abusive partner’s view."

In watching Celeste dwell on these happy memories of Perry, we see how deeply she loved the man she thought he was, and how badly she wanted things to work out — even to the point of blaming herself for being in that situation. It will take a while for Celeste to work through the abuse, both physical and psychological, inflicted by Perry — even though he is no longer inflicting it. But it's a testament to Big Little Lies' dedication to telling a realistic story about domestic violence that they aren't pretending Perry's death allowed Celeste to move seamlessly into the next chapter of her life. Perry may no longer be alive, but Celeste is still grappling with who he was and the trauma he left behind.