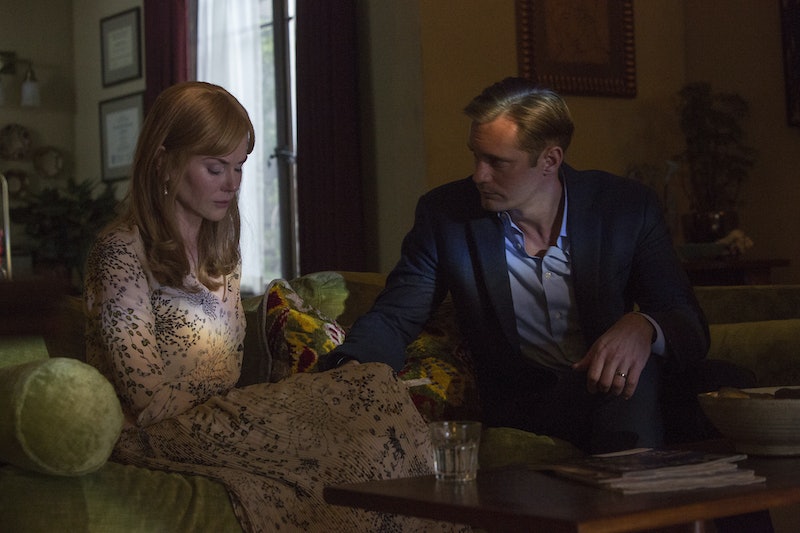 At first glance, I thought Big Little Lies on HBO would be a fun whodunnit crime drama with a healthy dose of dark humor, courtesy of the "kamikaze parents" at Otter Bay Elementary School. Although I'm admittedly eager to find out the identities of the deceased and the killer, the miniseries has become my latest obsession for a very different reason. Big Little Lies spotlights domestic violence and helps viewers understand how abusers operate — and why it's so often difficult for women to leave.

Out of all the moms at Otter Bay, Celeste (Nicole Kidman) appears to lead the most charmed life. She's a brilliant, accomplished lawyer who's become a stay-at-home mom to her twins, her lavish mansion is the stuff of home decor dreams, and she's married to an attractive younger man. On the surface, Celeste's life seems close to perfect. She never arrives anywhere with a hair out of place, and Celeste makes it look effortless. No one would ever imagine that her charming, attractive husband psychologically and physically abuses her when they're in the privacy of their own home — and they'd certainly never guess that Celeste's habit of wearing long sleeves and turtlenecks is most likely a way to hide her bruises.

Like many perpetrators of domestic abuse, Perry has a "Jekyll and Hyde" personality — and this doesn't simply mean he becomes a violent terror the moment he and his wife are alone. He violently chokes Celeste and mocks her when she tells him he's hurting her, then proceeds to shower her with gifts, flattery, and promises to change just hours later. In fact, Alexander Skarsgård's performance is so spot-on that some viewers may even believe his apologies — especially when he owns up to his explosive behavior during a therapy session.

Celeste hasn't indicated that she's considering truly leaving her husband — and it's not simply because she's a perfectionist who'd rather be abused than shatter her perfect image by getting a divorce. It's because she wants to believe her husband is good man who will, one day, finally keep his promise to never physically hurt her again. And, Celeste's own narrative doesn't appear to show viewers the extent of Perry's abuse — for example, it's clear from a shower scene that there are bruises on her body from an incident that wasn't shown onscreen. She seems to be comforting herself with a false narrative of what type of husband and person Perry truly is.

The abuse is also psychological and involves emotional gaslighting. When Celeste doesn't provide Perry with constant updates about their twins' activities, he accuses her of deliberately planning events to exclude him. And, in the previously mentioned choking incident, he responds to her pleas to stop hurting her by saying: "Can we talk about how much you hurt me?"

In therapy, he manipulates the conversation so he can imply that his violent behavior is rooted in deep love for Celeste and fear of being abandoned. Perry says that he's "terrified" Celeste will stop loving him and leave because she seems unhappy lately — statements that seem designed to make Celeste blame herself for the abuse, or be willing to forgive him because he claims his violent behavior is the result of insecurity.

At the end of the March 5 episode "Living the Dream," Celeste tells Perry that she feels hopeful about their future. Big Little Lies may be a mystery, but there's one thing I think we can count on for sure — Perry's abuse will only continue to escalate and Celeste may find her life in danger very soon.

Meanwhile, it already seems clear that the couple's violent relationship hasn't gone unnoticed by their children. Ziggy didn't hurt Amabella, but the little girl was choked exactly like Celeste, so she could be being targeted by either Josh or Matt. Domestic violence can be a learned behavior — so, even though there's no indication that Perry has abused Josh or Matt, children who witness one parent abusing the other are also at risk for psychological problems. Only time will tell what the future has in store for the Wright family, but Big Little Lies' showrunners seems committed to depicting the realities of domestic abuse, and it's so important to see this issue represented on TV.