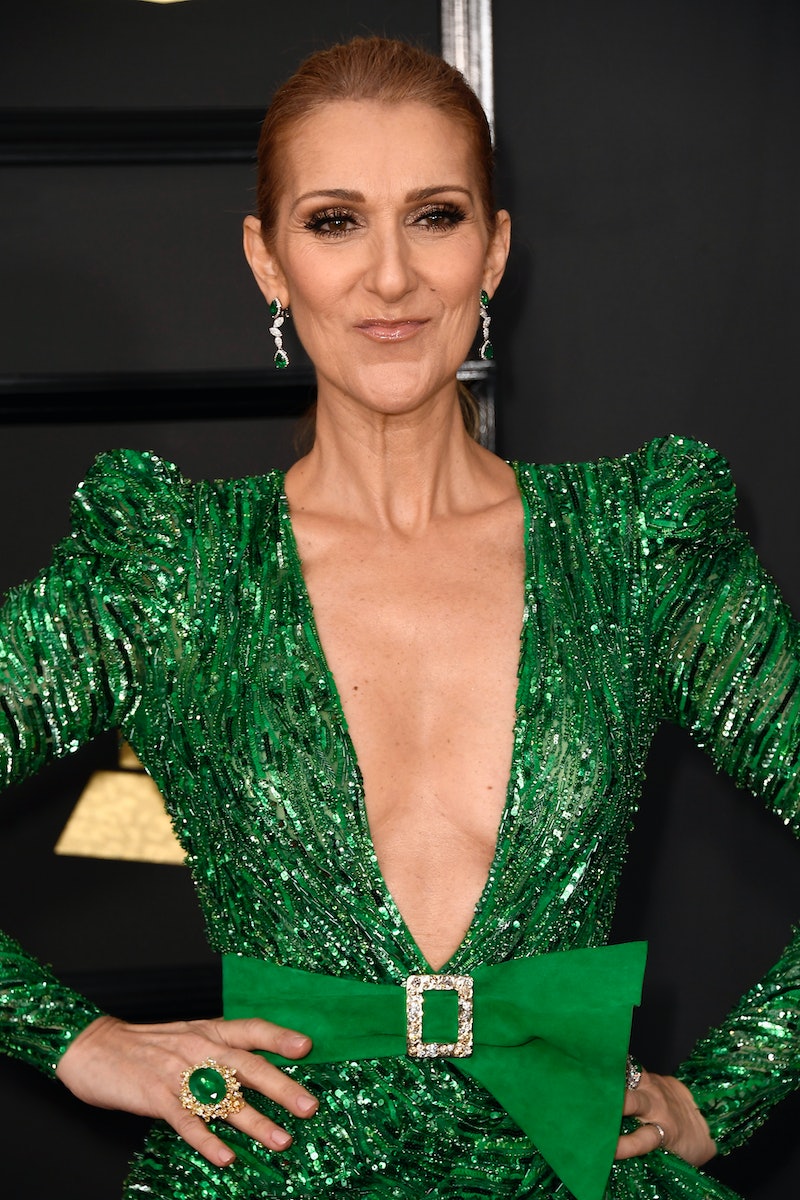 Celine Dion has long time been a fashion icon, so much so that she has become something of an Instagram fashion influencer. And now, with Celine Dion's upcoming Elle cover, the artist has cinched that fashion idol role. Dion stars on a special subscriber cover of Elle's June issue, complete with a photo shoot that has the artist posing in the kind of avant-garde outfits that she has become known for.

For example, on the cover, Dion is wearing Valentino Haute Couture. The outfit consists of a floral black and white dress, complete with massive tulle sleeves that are accented with white wildflowers. The dress looks more like a work of art than a wardrobe staple.

But there are plenty more looks than just that one. Another such outfit is a yellow look made up of Givenchy Haute Couture, where Dion wears canary yellow latex pants. The latex is paired with a sleeveless peplum top that has the faint look of a 19th-century girdle. Another outfit centers around a Dior Haute Couture tent dress with ruffles. The ruffles look like stacked Victorian ruffs, which Dion pairs with strappy stilettos. And let us not ignore the slinky green Alexandre Vauthier Couture dress, that looks equal parts reptilian and equal parts Studio 54.

Dressing Dion in high fashion is only right. As Elle pointed out in its cover article, Dion famously told told journalist John Heilpern, "Some people do drugs, I buy shoes."

While Dion has always loved fashion, she became an Instagram sensation around 2016, when she hired stylist Law Roach. She caught social media users' attention when Roach put her in a Titanic hoodie, which she then paired with skinny jeans and gold strappy heels. Instagram ate it up, and followers have been stanning Dion's looks ever since.

And there are plenty. One recent photo was of the singer taking a break during her L'Oreal photo shoot, and Dion was kicking back in acid wash jeans and a muppet red coat the size of a duvet cover.

Another was of Dion inside a high rise overlooking Bangkok, where she was wearing a bright yellow power suit and sitting in a leg-spreading power pose to match.

Then there was the time Dion stood in front of her private jet wearing a pink silk suit complete with pink fuzzy kitten heels. Everything she wears is flawless.

But that's not to say that Dion takes her fashion icon status seriously. In fact, she doesn't think she is one at all. “I love fashion a lot, definitely. For me, fashion is art. It’s a way of expressing yourself. When I put something on, I play. I don’t take myself seriously. I kind of, like, borrow a character. But to be considered a fashion icon?” Dion tells Elle. “I don’t know, I just do one day at a time, do the best I can, feel the way that I want to feel. That’s the most important thing.”

Dion is all about finding the fun in fashion, and she will inspire you to do the same. Elle's June cover lands on stands May 21, so you can get your Dion fix then.