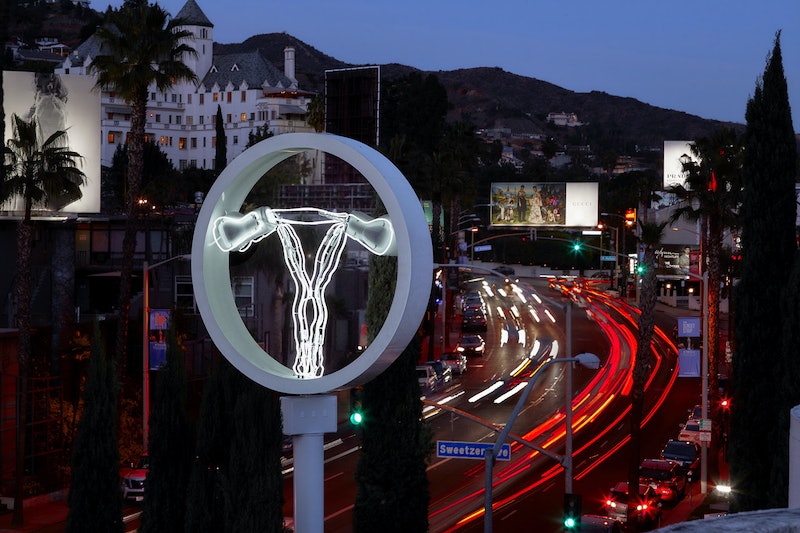 Halle-fricking-lujah. I don't know how else to express how much I love this giant uterus that's lighting up the Sunset Strip in Los Angeles. Yes, I said a giant uterus. Champ is a piece by Zoë Buckman, a powerful artist and activist, and it was lit for the first time on February 27. The neon piece stands 43 feet tall and nine feet in diameter, so there's surely no missing it. It's an amazing kickoff to Women's History Month, but luckily, it'll stick around a bit longer. Presented by the Art Production Fund at The Standard, Hollywood with support by alice + olivia by Stacey Bendet, Champ will stand for an entire year. An entire, uterus-loving year.

If you don't know Buckman's work, it's time to get up to speed. Her work is feminist, fierce, and unapologetically political. This piece is a giant, neon uterus, complete with a set of huge boxing gloves where you would normally see ovaries. And though there's the clear juxtaposition of traditionally masculine imagery — boxing gloves — and female anatomy, she welcomes a range of interpretations. "The response has been really moving," Buckman tells Bustle. "I’ve had so many women from all over the world writing to me because they feel represented by this work. There’s really nothing more rewarding than that."

"I’ve had so many women from all over the world writing to me because they feel represented by this work."

With a piece so striking and so political, it's no surprise that the inspiration for Champ came from a frustration with the attack on women's issues. "I was making work in my studio about the war on women," Buckman says. "It was a response to all the statements circulating in the media in the run up to the election about choice and rape and women’s access to sexual health. I was incredibly frustrated at the time and was using boxing as a way to work through my own difficult experiences as well as channel my aggression about the what was happening politically. I started to bring boxing iconography into the studio. I had previously made a neon line drawing of my placenta and a neon chastity belt sculpture with lines that ended up looking remarkably like the female reproductive system: so it was a natural progression to create a neon uterus."

Though she was born in East London, she's been living in New York City for the past 11 years and was struck by the way that women's issues have been discussed, especially during elections. "There really is a difference between the way the female experience is represented in the UK to how it is here in the U.S.: and it effects everything from legislation to advertising," Buckman says. "I think the feminist movement is bigger here in America… but I think the grip of religion is bigger here too and that that effects the way women are treated. White male supremacism sadly has firm roots here. These things are all present in the UK but I think British issues are more class-based. There is so much work to be done on both sides of the pond!"

This is far from the first political statement Buckman's made through her art. She has previously teamed up with Project Runway winner Anya Ayoung-Chee for the Planned Parenthood 100 Year Gala, designing a mural for the event. She also created a mural with with Natalie Frank in the New York Live Arts Ford Foundation Live Gallery space — that piece was called "We Hold These Truths To Be Self-Evident" and was a response to Trump being elected.

In the lead-up to the election, Buckman created a For Freedoms billboard that was installed in Harrisburg, PA from mid-October to mid-November. It read "Grab 'Em By The Ballots", in response to Trump's infamous comment — and the way he tried to brush it off afterward.

Buckman's work is inspiring, witty, and refreshingly in-your-face — and it's given Hollywood its best new addition. If you're in the area, there will also be a show of Buckman's work called “Let Her Rave,” opening at the Gavlak Gallery, 1034 North Highland Ave and running through April 7. But if you're not nearby, Champ is so big and brave, it's light is going to shine pretty damn far. Even if we can't see it, it's definitely something we can all get excited about.

More like this
Help! My Partner Only Wants Sex Late At Night & Won’t Compromise
By Sophia Benoit
Experts Say These 23 Things Won't Happen In A Strong Relationship
By Carolyn Steber
How To Fight For Reproductive Rights, Based On How Much Time You Have
By Courtney Young
What Mercury Retrograde Spring 2022 Means For Your Sign's Sex Life
By Nina Kahn
Get Even More From Bustle — Sign Up For The Newsletter