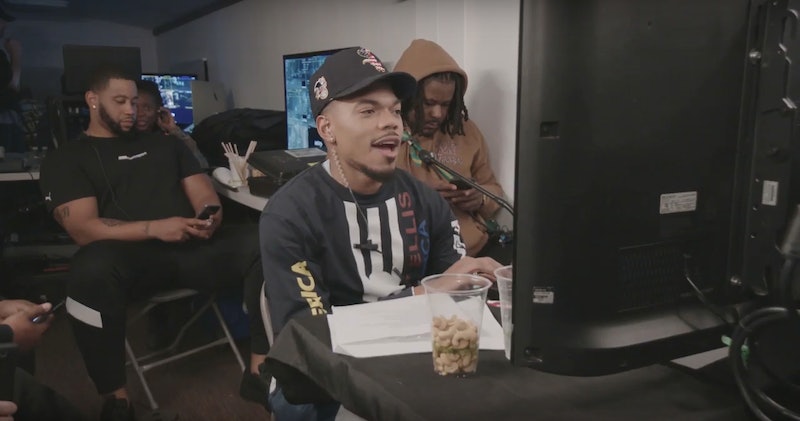 Calling all MTV fans of the early aughts: Chance the Rapper will host a Punk’d revival on Quibi. The Grammy-winning artist and his signature baseball cap will succeed Ashton Kutcher in the 2003 series that pulled elaborate pranks on unsuspecting Hollywood celebrities. The reboot for Quibi, set to launch on April 6, will be “reimagined for a new generation” and consist of “bite-sized episodes” of 10 minutes or less, per Quibi’s press release.

“Punk’d is one of MTV’s most iconic franchises,” Chance the Rapper, real name Chancelor Jonathan Bennett, said in a statement. “I grew up watching this show and it’s surreal to be in the driver’s seat this time around on Quibi.”

Co-created by Kutcher, MTV’s Punk’d aired between 2003 and 2007 and featured pranks on major Hollywood stars such as Beyoncé, Katie Holmes, Halle Berry, Justin Timberlake, and Hugh Jackman. While the series ended in 2007, it briefly resurrected in 2012 and featured different celebrity hosts, such as Dax Shepard and Miley Cyrus, each week.

While celebrity “marks” will be announced at a later date, the first teaser clip features rapper Megan thee Stallion in a frightening situation with an escaped gorilla. The “Hot Girl Summer” rapper screams in hysterics when the large animal sprints towards her car.

While the MTV series will find a new home at Quibi, its original co-creator, Kutcher, squashed all speculations of his possible return to the reboot last June. “I have nothing to do with the new punk’d situation,” the That ‘70s Show alum tweeted at the time. “Hope they get it right.”

Punk’d isn't the only MTV series getting the reboot treatment at Quibi. MTV’s Singled Out, the 1995 dating game show hosted by Chris Hardwick and Jenny McCarthy, will be revived on Quibi with hosts Keke Palmer and Joel Kim Booster.

Quibi’s Punk’d won’t mark Chance the Rapper’s first foray into hosting. The rapper also hosted Netflix’s hip-hop competition series Rhythm and Flow. On top of that, he's a two-time host of Saturday Night Live. While gearing up for hosting duties last October, Chance appeared on The Tonight Show with Jimmy Fallon and said it was a childhood dream to be both host and musical guest due to MC Hammer’s 1991 stint.

“It’s been a dream for me since I was a little kid,” the rapper said. “My older cousin Chris used to have all this MC Hammer memorabilia… and one of them was a VHS recording of MC Hammer hosting and [serving as] musical guest on SNL, so I always wanted to do that.”

Catch Punk'd on Quibi, set to launch on April 6.