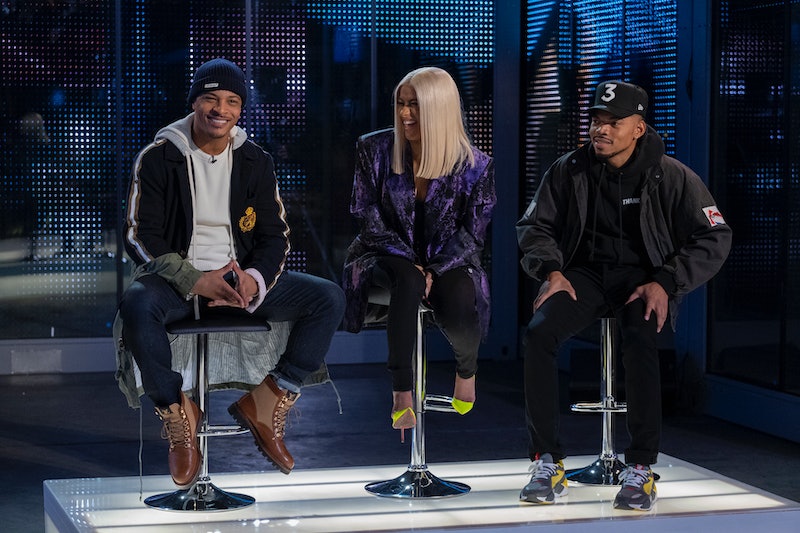 Netflix is getting into the reality competition game with its new series, Rhythm & Flow. But, far more importantly for the contestants, the Rhythm + Flow prize will change the winner's life. Sharing their music with Netflix viewers and hanging out with T.I., Cardi B, and Chance the Rapper may feel like reward enough, but the person who wins Rhythm + Flow will get a cash prize and the opportunity to perform in a live concert event. So while Rhythm + Flow is a once-in-a-lifetime experience already, the prize makes the reality show truly life-altering for whoever wins.

Cardi B, Chance the Rapper, and T.I. are looking for "the next hip-hop sensation" in Rhythm + Flow. The first four episodes dropped on Oct. 9 where they held auditions in Los Angeles, New York, Atlanta, and Chicago. With some help from guest judges, they whittled the contestants down to 30 and in the next series of episodes, the hopeful artists will compete in Los Angeles in cyphers and rap battles.

The next step will be going into the studio to create original songs and record featured verses for major artists. Then, after they perform live, the judges will choose one rapper to win. This promising new hip-hop artist will take home $250,000 and perform at Spotify's RapCaviar Live event.

A quarter of a million dollars is major for most people and Rhythm + Flow highlights how much the cash prize would change some of the contestants' lives. The first contestant to be featured, Inglewood IV, shared ahead of his Los Angeles audition how he lives with his pregnant wife, their daughter, and his wife's mom, uncle, and grandmother. "It gets really difficult being confined to one room, especially all three of us," Inglewood IV said about his family's situation. "It makes me feel like sh*t," he added, noting how he works two jobs but it's not enough for him to move.

Besides the cramped living space, the rapper brought up how he doesn't want to raise his daughter in the Inglewood area due to the presence of gangs. "It's not the ideal neighborhood you want you kid growing up in," he said. "I can't even walk her to the store without getting pressured." Knowing how important this chance was for him, it's no wonder Inglewood IV was emotional in front of judges Snoop Dogg, Chance, Cardi B, and T.I. following his rap about police brutality.

As he said before getting on stage, "I have an opportunity ahead of me to get my family out of this situation and do better for them and actually become the man that I'm supposed to be." And he got one step closer to that when the judges decided he should go to the next level of competition.

Beyond the money, which would help the new artist establish themself, the winner will get to show off their talent as part of Spotify's RapCaviar Live. Inspired by the popular Spotify playlist, RapCaviar Live is a touring event featuring major hip-hop artists. Cardi B and Chance the Rapper have both performed in RapCaviar Live since it was established in 2017, so those judges are perfectly prepared to help the winner with their first-major concert performance.

The experience of being on Rhythm + Flow and meeting all the major hip-hop artists involved in the Netflix series gives each contestant some major exposure. But the goal of any reality show is to win. So whoever out of the 30 contestants wins it all just may become the next rap superstar thanks to the grand prize.

More like this
'RHOBH' Star Diana Jenkins’ Fiancé Asher Monroe Once Shared A Stage With Kelly Clarkson
By Brad Witter
Move Over, 'Sunset'! The Drama-Filled Trailer For 'Selling The OC' Is Here
By Nola Ojomu
This 'Bridgerton' Polin x 'Love Island' Crossover Is Everything
By Darshita Goyal
Selena + Chef Season 4 Was Filmed At Hannah Montana's Old Malibu House
By Jake Viswanath
Get Even More From Bustle — Sign Up For The Newsletter