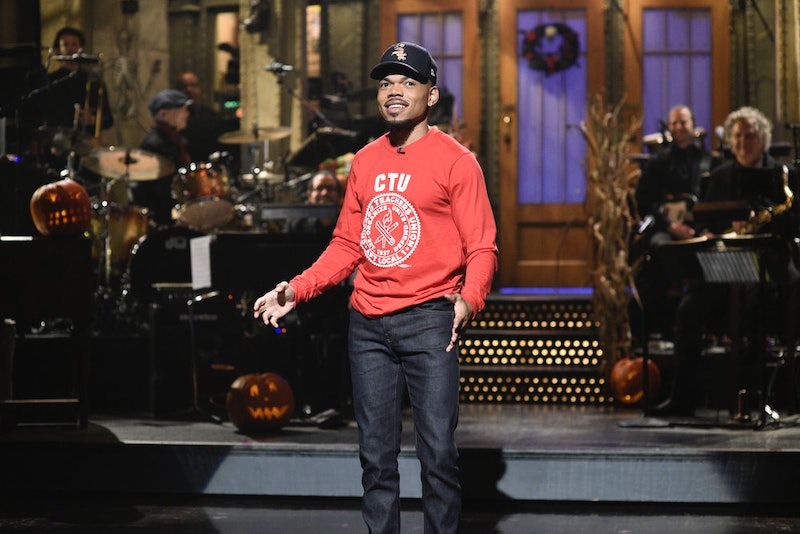 Chicago is feeling the love after Chance The Rapper's Saturday Night Live monologue paid tribute to the Second City —and a whole lot of other second best underdogs like Luigi and Pepsi. Chance opened Saturday night's show with a rap devoted to his hometown in which he rapped "sometimes, the second-best is better than the first." He then went on to drop a dizzying array of pop culture references with an assist from SNL cast member Kyle Mooney.

Over the course of his rap, Chance managed to sing the praises of Sense and Sensibility, Buffy the Vampire Slayer spinoff Angel, and even Redbox. For his verse, Mooney boasted about the brilliance of California Dreams over Saved by the Bell, and then asked if he could be on Chance's next album. The rapper gave him a quick "no," before getting back to his love letter to Chicago. His rap continued:

"Yeah, I’m the kind of guy that likes the second-best better

I think Chicago is better than the rest

I take seconds at dinner and second glances

I believe in second chances."

His second best monologue rap also tied into the fact that it was second time hosting the show. Chance previously hosted in 2017, when he donated $1 million to Chicago's public school. This time around he came out wearing a red Chicago Teachers Union sweatshirt and expressed his support for their current strike. Per The Chicago Tribune, the CTU is seeking smaller class sizes and better staffing for the city's students.

"Honestly, to the teachers in Chicago, I know you guys are on strike right now — I fully support you," he said. "I just wish that when I was in school, my teachers went on strike. For real, though."

Chance's rap proved once again that he's a true son of Chicago, and that there might just be something to his theory that the second best can be better than the first. His second time hosting was certainly full of entertaining moments including cameos from Jason Momoa and Megan Thee Stallion, and a killer (literally) Tasty Toaster Tarts Halloween sketch.

From his opening monologue to his show-stopping musical performance, Chance The Rapper did Chicago proud with his second Saturday Night Live hosting gig.

More like this
Michael B. Jordan Tackled His "Public Breakup" With Lori Harvey On 'SNL'
By Brad Witter
Pedro Pascal Barely Got Through The "Lisa From Temecula" 'SNL' Sketch
By Stephanie Topacio Long
Grammys Host Trevor Noah Made Adele's Dream Of Meeting The Rock Come True
By Brad Witter
Who Is Pete Davidson Dating? He & Chase Sui Wonders Got Caught Kissing
By Jake Viswanath
Get Even More From Bustle — Sign Up For The Newsletter
From hair trends to relationship advice, our daily newsletter has everything you need to sound like a person who’s on TikTok, even if you aren’t.