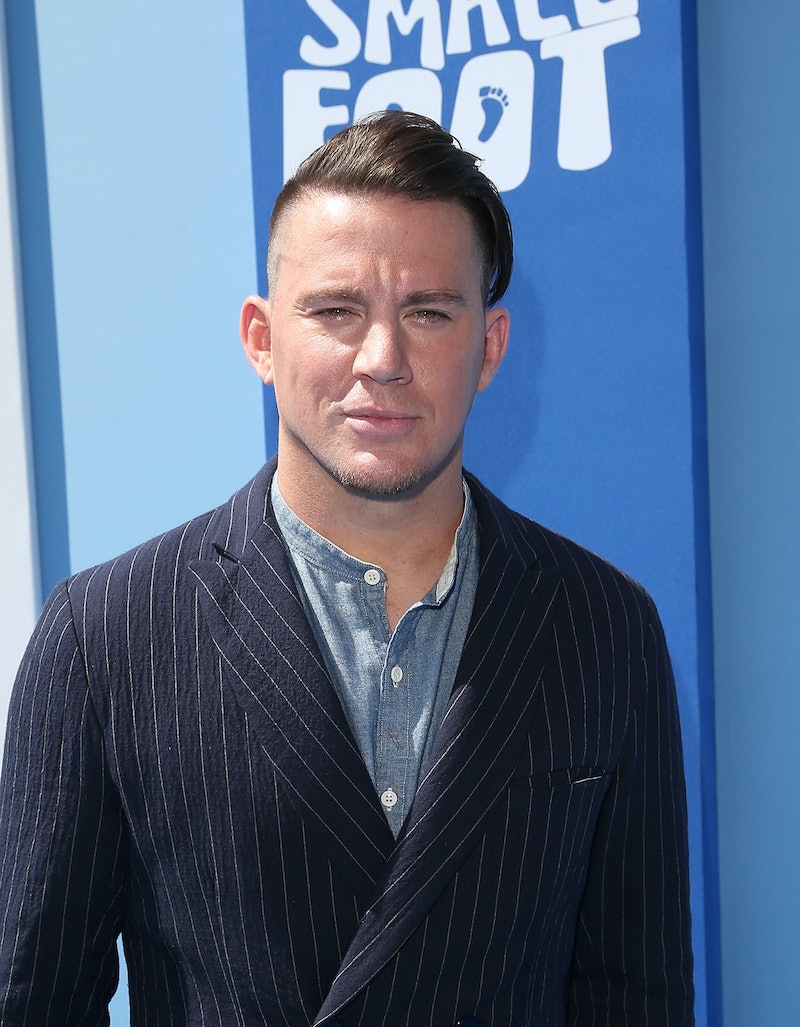 Over the last few months, watching the relationship between Channing Tatum and Jessie J unfold has been really sweet, and now, we get to see this couple's more competitive side. More specifically, we have proof that when the Magic Mike star loses a bet, he always follows through. On Wednesday night, Tatum posted a photo of himself in the shower — because apparently, that was his punishment for losing a game of Jenga to Jessie J —and it just goes to show how much fun this couple has together, even if it does means there are real life consequences to the outcome of their game nights.

In the photo, Tatum is standing in the shower, fully naked (with his hands covering up his more private area, of course) as the water is hitting him. It's definitely not a bad looking photo by any means, because this is Tatum that we're talking about, but it makes sense that he may not have wanted to share a totally nude photo of himself on his Instagram page, hence the punishment for losing Jenga... which is actually a relatively easy game to lose, in his defense.

In his caption, he wrote:

"I lost a game of Jenga to Jessica Cornish. The loser (me) had to post a picture the other person (Jessica Cornish) picked... Smh and fml... I’m never playing Jenga with her ever again..."

And as he pointed out in the post, Jessie J was the one who took the photo, and according to the comment she left, it seemed like she was pretty satisfied with the outcome of their bet.

"Sharing is caring," she wrote, adding the heart eyes and fire emojis.

A few other celebrities also chimed in to share their thoughts on Tatum's new photo, including Dax Shepard, who couldn't help but share how impressed he was with his quads...

And Olivia Culpo and Halle Berry both chimed in with comments of their own, clearly just as entertained by this Instagram post as everyone else was. Culpo is right — Tatum's photo definitely had the potential to break the internet.

Tatum and Jessie J have seemed to have a pretty sweet relationship so far, and this Instagram post is just more evidence of that. In March, Tatum took to the app to share a birthday message for her, posting a photo of the singer with sunlight streaming in through a window and hitting her face. He wrote:

"Wishing you the happiest day filled with all the love and all the light. You came into this world on this day and lit it on fire. You have blessed our eyes, our ears, our hearts and our lives. So thank you for just being you. You are so very special. Happy birthday Baby."

And now, they're playing high stakes Jenga together. Who would have known?

It would seem that everyone has learned a valuable lesson here, but none of us more than Tatum: Do not ever play any kind of game, board or otherwise, with Jessie J, unless you are prepared to face real consequences if you lose. The follow through will happen in a big way, and everyone on Instagram will know about it.