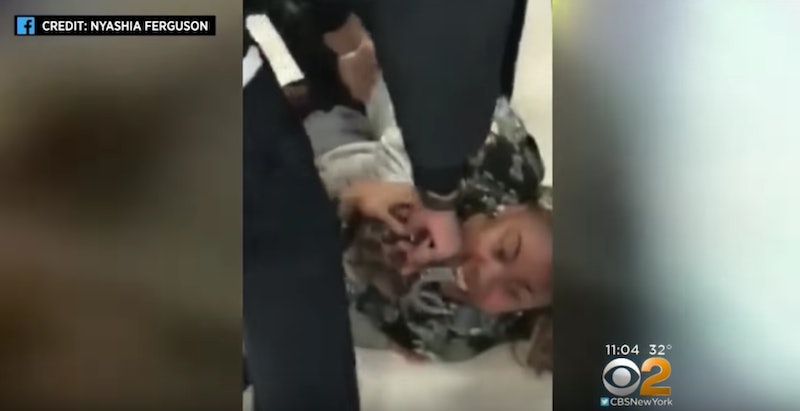 The Brooklyn district attorney announced Tuesday that charges against Jazmine Headley have been dropped, and a judge ordered her released from jail later in the day. Headley made international news after a video of New York police forcibly ripping her infant son from her arms went viral in early December.

"Like everyone who watched the arrest of Jazmine Headley, I was horrified by the violence depicted in the video and immediately opened an investigation into this case," Brooklyn District Attorney Eric Gonzales said in a statement on Twitter. "It is clear to me that this incident should have been handled differently. An HRA Officer escalated the situation as Ms. Headley was about to leave the premises, creating an awful scenario of a baby being torn from his mother."

Shortly after Gonzales made his announcement, a judge ordered that Headley be released from Rikers, where she's been jailed for the past week. Her lawyer said on Twitter that she'll be home Tuesday night.

This incident unfolded at a Human Resources Administration office in Brooklyn, where Headley was attempting to resolve an issue with day care vouchers for her 1-year-old son. She had been sitting on the floor for four hours when security guards asked her to move or leave the building. However, there were no more chairs left to sit in, and Headley hadn't yet resolved the voucher issue, so she refused to leave.

The security guards called the police, who soon arrived on the scene. The video of the incident shows multiple NYPD officers descending on Headley and attempting to forcibly yank her baby from her arms, with Headley screaming "they're hurting my son!" repeatedly as shocked bystanders observe the scene.

Although the video prompted outrage at the NYPD, it's Headley who was ultimately punished after the incident. Police charged her with criminal trespassing, resisting arrest, acting in a manner injurious to a child, and obstruction of governmental administration, and jailed her on Rikers Island.

"The consequences this young and desperate mother has already suffered as a result of this arrest far outweigh any conduct that may have led to it: She and her baby have been traumatized, she was jailed on an unrelated warrant and may face additional collateral consequences," Gonzales said in his statement. "Continuing to pursue this case will not serve any purpose and I therefore moved today to dismiss it immediately in the interest of justice."

The charges against Headley, all of which pertained to her arrest at the Human Resources Administration office, have been dismissed, and her lawyer said on Twitter that she'll be home Tuesday night. However, Headley is still the subject of an unrelated arrest warrant from 2017, when she was indicted on charges of credit card theft and identity theft. As a result, she will have to appear in court in New Jersey on Wednesday morning; her attorneys say they'll ask for those charges to be dismissed.

Two of the NYPD officers who pulled Headley's baby from her arms were placed on "modified duty" after the video circulated, the commissioner of the New York's Human Resources Administration told ABC News on Tuesday.

CORRECTION: A previous version of this story misstated Brooklyn District Attorney Eric Gonzalez's title. It has been updated.