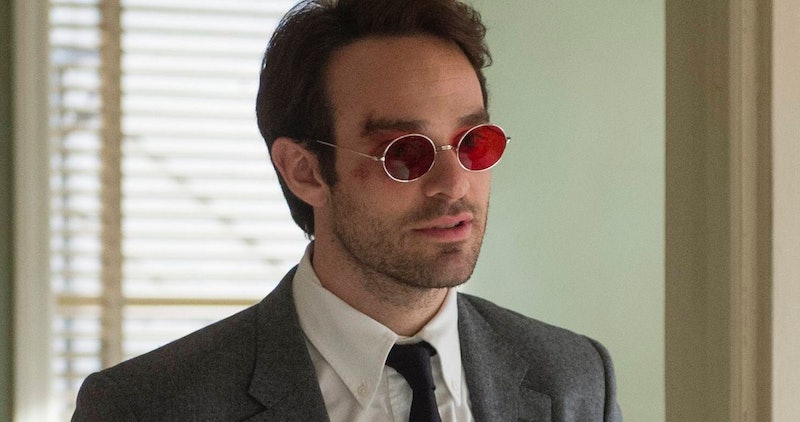 Prepare to fall madly in love with Charlie Cox all over again. In a recent interview with Entertainment Weekly, Cox revealed the one Defenders comic book scene he would like to see in the upcoming series, and his pick is all kinds of amazing. In preparation for The Defenders, Cox read the comics to see how Daredevil interacts with Luke Cage, Jessica Jones, and Iron Fist. Much to his surprise, he found Daredevil doesn't interact with them at all because they were never part of the lineup at the same time in The Defenders comics.

Undeterred, Cox delved deeper into Daredevil's team ups until he found the information he was looking for. After all his research, he found one scene between Luke Cage and Daredevil in a Daredevil comic that he wants to see included in The Defenders, and the scene is an amazing slice of life moment the series would be lucky to have.

"One of my favorite images is from a Daredevil issue with Luke Cage and Daredevil on a rooftop eating cheeseburgers," Cox told EW. "I love that."

I think I speak for everyone when I say, Luke and Matt eating cheeseburgers on a rooftop together is the dream. Sure, it is a small thing, but it is packed with meaning. A scene involving Luke and Matt grabbing a burger while they keep an eye on the city suggests a level of trust and bonding between two characters who fans are psyched to see team up.

The Defenders is all about bringing Daredevil, Luke Cage, Jessica Jones, and Iron Fist together in a meaningful way. Netflix is uniting four heroes who each have trouble relating to others on some level. They are damaged, but courageous people who don't open up easily. That's why it is so important for The Defenders to not only show them connecting to stop whatever big bad is threatening New York City, but to find a sense of common ground and understanding with each other at the same time.

Of all the heroes, Luke is the one with the biggest heart, so it makes sense he and Matt would bond. These two men have suffered great losses, but they still find a way to use their abilities to save as many people as possible. If a bromance is going to bloom, it really should bloom between these two, and seeing them become friends would be so rewarding.

The comics have already established Daredevil and Luke as friends who often team up. It's time for their bond to be explored onscreen as well. Hopefully, The Defenders will lead to the various Netflix Marvel series taking note that heroes are even more fun to watch when they aren't working in isolation. Even after they save the world in The Defenders, there should still be time for Luke and Daredevil to grab the occasional burger — the Netflix branch of the Marvel universe will be richer for it.

The Defenders premieres on Netflix this summer — keep your fingers crossed for burger sharing.