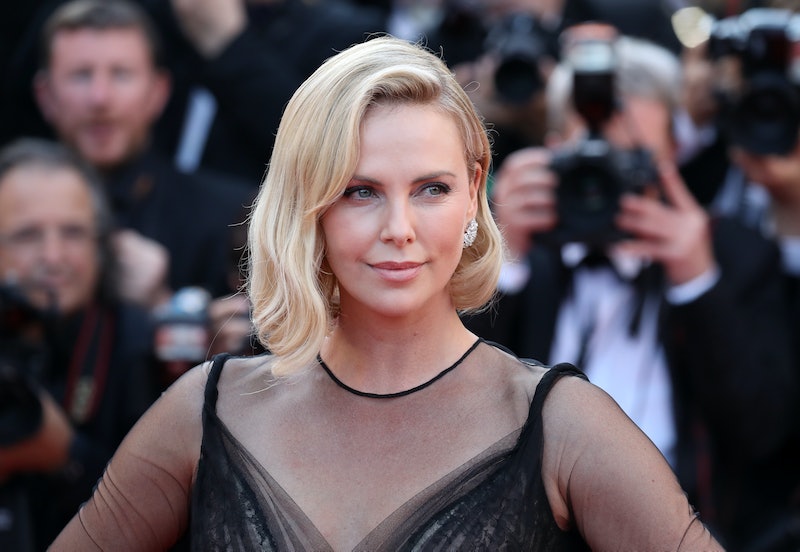 Charlize Theron is pissed. It's not that Atomic Blonde, her new movie, isn't getting good reviews — the praise started pouring in back in March when the spy thriller premiered at South by Southwest, and it hasn't stopped since. And it's not that she's not happy with how the movie turned out; if the reaction the film and Theron got at Comic-Con is any indication, audiences will be clamoring to get tickets. What's making her mad is the underlying truth: that despite the good reviews, despite all the hype, if Atomic Blonde doesn't succeed at the box office, then nothing else matters at all.

"I know that if this movie doesn’t do well, it will take me awhile to make another movie like this," Theron explains, speaking with me a few days before Atomic's July 28 premiere. She's friendly and polite when we speak, but I can also hear the frustration in her voice. "It’s very unfair for women, because we have one movie that doesn’t work and then all of a sudden it’s like, we just have to go back to square one."

Even Hollywood's biggest female movie stars aren't immune to this — and Theron would know. Back in 2005, the actor starred in another female-led action thriller, Aeon Flux, but unlike Atomic, that film earned poor reviews and ended up being a flop at the box office. Similarly, actors like Halle Berry and Jessica Biel have struggled to find success after box office misses like Catwoman and Stealth, respectively. After Aeon Flux, Theron says, it took a long time for her to be able to get another female-led action movie made. "I think all of us actresses that’ve been in this world for a bit, will tell you that... [bouncing back] does not happen for us. Not for any of us, no matter how big your audience is. You have to be able to look at that and realize there’s still an inequality there that you have to acknowledge."

Atomic Blonde is a passion project for Theron, who produced the film in addition to starring as MI6 agent Lorraine. The actor spent five years developing the film, going through several versions of the script to get it in line with the vision she and her co-producers had, making Lorraine's journey as unique and compelling as possible.

"It’s a difficult thing to go and actually make the movie that you developed," Theron says now. "And I think that’s the thing that I’m the most proud of. I feel like we really set out to make this movie, and we ended up making that movie."

Lorraine is, truly, unlike any other female action heroine before her; Lara Croft, Lucy, Beatrix Kiddo are strong, but not like Lorraine. What sets this character apart is, as Theron says, the lack of "emotional baggage" she's forced to carry.

"I didn’t want to do that trope-y thing that women get to do, where it has to be a revenge story," the actor explains. "They have to have lost something in order to fight this good... We don’t do that with men, for some reason. It’s like this fear that you cannot relate to a female unless she has gone through any of those things, and I just don’t believe in that. I don’t think that’s real."

With Lorraine, Theron continues, "it’s not about the fact that she’s lost someone, or a husband, or she had a miscarriage. She just exists in that world."

Fifteen, ten years ago, you couldn’t produce a lot of female-driven stuff, in any genre, just because nobody wanted to make it."

A character like Lorraine is certainly worth celebrating, but Theron is adamant that that type of heroine shouldn't be such an anomaly. "It’s super flattering, and at the same time, it’s like come on guys," the actor says of the reactions Lorraine has received. "This has all been so great, but at the same time, I also realize that there needs to be more opportunities like this for women."

Which is one of the reasons Theron created her own production company, Denver and Delilah, in the early 2000s. Today, many female actors like Reese Witherspoon and Kerry Washington have production companies as well, but back when Theron began hers, she was one of the few to make the switch — meaning that people didn't actually expect her to put in serious effort.

"I was like, 'well when do I do the work?' And they were like, 'no no no no no, you don’t have to do anything,'" the actor recalls. "And I just couldn’t comprehend it, it was just so unbelievably f*cked up to me.... I actually thought it was an insult. It was like, wait, I see what this is, you think I can’t actually do the job."

Theron could, of course, and she proved it quickly, producing smart, female-driven films like Monster — which won her a Best Actress Oscar — and the critically acclaimed Young Adult, in which she played an antihero for the ages. "It took awhile for us to break through," she remembers of that time. "Fifteen, ten years ago, you couldn’t produce a lot of female-driven stuff, in any genre, just because nobody wanted to make it."

Things gradually improved, but not by much. Television, however, is a whole different world; there, Theron says, complex, flawed female characters like Young Adult's Mavis or Atomic Blonde's Lorraine exist in spades.

"The way people talk about Atomic, we don’t talk about it in television because it’s there," the actor says passionately. "It’s already existing."

In the film sphere, Theron, like so many other women, struggles frequently to get more female-led content made. "It is still very much an everyday thing to work on something or try to sell something and still have Neanderthals tell you things like, 'they’re not gonna like her,'" she says. "You still have a lot of men saying stuff like that, and it’s like what? How old are you? What cave do you live in?... I look at those things as just like, the thorn in my side, but it doesn’t stop us from doing what we want to do."

Whatever's up next for Theron, whether that's the Atomic Blonde sequel ("we are actively moving forward in doing it," she reveals) or the several films she's producing with her company, there's no doubt she'll do the work exactly the way she wants — and if I were you, I wouldn't dare try to get in her way.