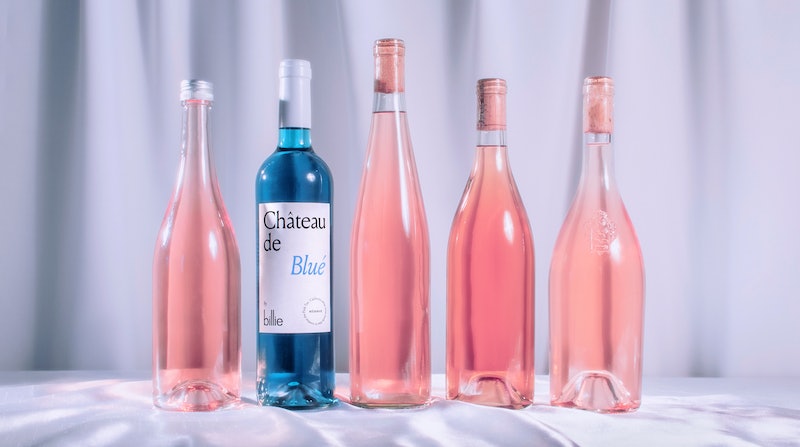 If you're mourning the end of summer and the demise of rosé season (yep: there are apparently seasons for wine), then the shave and body brand Billie has got you covered. The company, which usually focuses on shaving equipment and body lotion, is calling attention to gender bias in body product pricing with a limited-edition new product. This fall, Billie is launching blue wine called Château de Blué to highlight the "ridiculousness of this gender-biased pricing strategy," Billie said in a press release emailed to Bustle.

That gender-biased pricing strategy is often called the Pink Tax, which refers to the higher prices of most goods marketed to women. The Pink Tax impacts products marketed for girls and women from birth through old age. From toys for babies and "women's" body products to canes and compression socks marketed to older women, pricing inequalities combine with wage gaps that especially impact trans women of color, as well as other women, to create even more gender-based economic inequality.

And that's where Billie enters the scene. Their Château de Blué is a "full-bodied wine with notes of oak, blueberries, and just a hint of gender bias," according to a press release. The hint of gender bias is a play on the fact that it attempts to reverse at least a little of the Pink Tax. And on the fact that pink wine is now blue (a genderqueer wine, mayhap? Or Andorian ale, if Star Trek references are more your thing).

"Because 'pink' razors are traditionally 13% marked up for women," the press release says, "Blué is 13% cheaper than the average cost of Rosé" at $14.87. Take that, Pink Tax! And that's not the only thing Billie has in store for women and transfeminine folks who shave: The company also offers a Pink Tax Rebate (aka, discounts) when you and your friends buy Billie razors. The Rebate is, like the blue wine, meant to serve as a sardonic but practical objection to the Pink Tax. "On behalf of the razor companies out there — we're sorry you've been overpaying for pink razors," Billie's website says of their Rebate. "It's time you got some money back."

And that money back is not just owed to ciswomen, who are normally the focus of Pink Tax criticisms. Transwomen are impacted not only by Pink Taxes but also by routine exclusion from marketing campaigns aimed at women. (This emotional Secret deodorant commercial featuring a trans woman is unfortunately the exception to the transphobic rule.) Transmen and many nonbinary people need tampons and pads (which are subjected to rather large Pink Taxes) and many simply prefer certain "women's" products. And trans people of all genders, especially trans women in the workplace, experience deep wage gaps and employment discrimination.

Pink Taxes extend even beyond shopping aisles: Pink Taxes on public transit also affect people with marginalized genders, both in terms of wallet size and physical safety. A 2018 report published by the Rudin Center for Transportation found that women spend as much as $50 per month to safely get home at night, compared to men who spend no extra money on transportation because they tend to feel safer on public transit late at night.

So if all the gender bias in marketing, money, and safety is getting you down, you might want to take the edge off with a bit of blue wine. On Sept. 10, get your hands on Billie's blue wine, because the limited-run of the product will only last as long as supplies do.

And if you don't drink but you're out there wanting to protest gender-biased pricing with your wallet, you can still get your hands on some sweet Billie shaving gear. Don't shave or drink? That's OK! They've also got body wash. So really, everybody wins.