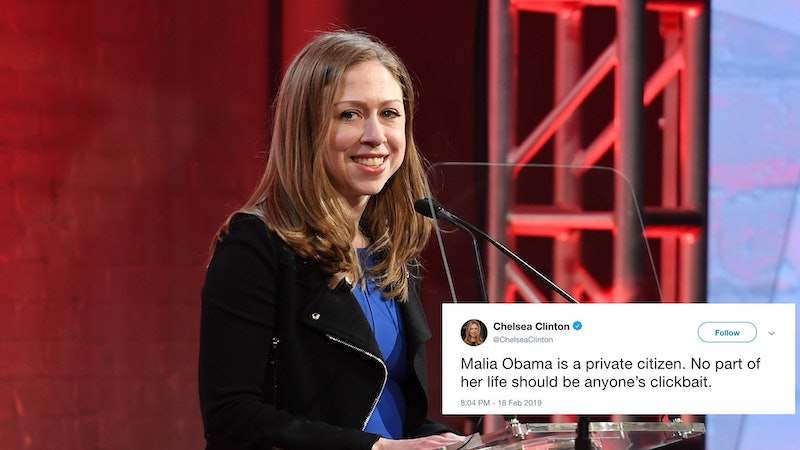 Chelsea Clinton has a pretty busy professional life as vice chair at the Clinton Foundation, a professor at Columbia University, and a member of numerous boards — but she still finds time to stand up for her fellow first children on Twitter when necessary. This time, Chelsea Clinton defended Malia Obama from tabloids reporting on the details of the older Obama sister's personal life that they claimed to have found on a "secret" Facebook page.

"Malia Obama is a private citizen. No part of her life should be anyone’s clickbait," Clinton tweeted on Monday.

The article in question was from The Daily Mail, a British tabloid, and it covered numerous different facets of Obama's life — from the fact that she was apparently seen drinking rosé despite being only 20, to a photo she allegedly posted on the "secret" Facebook showing a Post-it note that said President Donald Trump was "evil."

Clinton wasn't the only person to criticize this coverage — in fact, she wasn't even the only child of a former president to come out against the tabloids.

"Hesitant to add anything to such a nothing-story, but agree with @ChelseaClinton whole heartedly. Please don’t click on silly stories and let’s give Malia privacy," Jenna Bush Hager wrote, retweeting Clinton's original tweet.

Like Hager, Clinton has previously crossed party lines in order to defend presidents' children. In August 2017, for example, she garnered thanks from First Lady Melania Trump for defending Barron Trump on Twitter, as CNN reported.

"Dear Matty-Barron is A KID. No child should be talked about in the below manner-in real life or online. And for an adult to do so? For shame," Clinton tweeted in response to someone who had used vulgar language to criticize Barron.

The two former White House inhabitants weren't the only ones to come out in support of Obama, either. People from all political stripes called The Daily Mail article inappropriate for various reasons.

"I am shaken by the news of Malia Obama having opinions and friends. If she enjoys food or listens to music, I will be devastated," tweeted Crooked Media's Louis Virtel.

Clinton and Hager's Twitter defenses of Obama stand out, though, because the former first children have historically been so supportive of one another. In addition to comments online, there are also other touching stories, like how the Bush twins wrote letters to Sasha and Malia Obama both before they moved into the White House and right as they were moving out, as The Washington Post reported in 2017.

"You have lived through the unbelievable pressure of the White House. You have listened to harsh criticism of your parents by people who had never even met them," the letter concluded. "As always, they will be rooting for you as you begin your next chapter. And so will we."

More like this
We’ve All Had Bad Sex. Nona Willis Aronowitz Is Talking About It.
By Sophia Benoit
Naomi Osaka & Emma Raducanu’s Experiences Have Inspired A New Amazon Show
By El Hunt
It’s Official: 'The Bachelorette' Is No Longer A Fairy Tale
By Samantha Allen
The 5 Best Underwear For Preventing Wedgies
By Lisa Fogarty
Get Even More From Bustle — Sign Up For The Newsletter