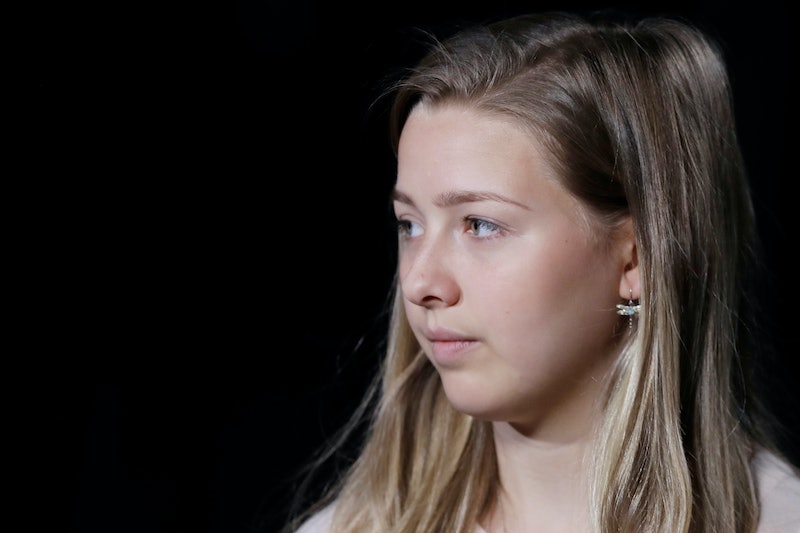 After serving six months of a 10-month sentence, New Hampshire prep school graduate Owen Labrie was released from jail for good behavior on Monday, according to the Associated Press. In 2015, Labrie was convicted of sexually assaulting then-15-year-old classmate Chessy Prout as part of an alleged competition among senior boys at the co-ed boarding school St. Paul's School the year before. Prout, who made her identity public in 2016, tells Bustle she plans to continue to fight for survivors' rights so they can pursue justice without fear of retribution.

"Every survivors' story is different but we all have a lifetime of healing ahead of us," Chessy Prout tells Bustle in a statement provided by her spokesperson. "I will continue to fight for the rights of survivors so that we can live without fear of retribution for pursuing justice. I hope that schools, institutions and communities will hold perpetrators accountable for their crimes so that victims and survivors can continue to live their lives and truly thrive."

Labrie's 2015 trial had spurred significant public interest as it raised numerous questions about the culture of sexual assault on school campuses. It ended with a jury that was composed of nine men and three women acquitting Labrie on a forcible felony rape charge, The Cut reported. Labrie, who was 18 at the time of the alleged incident, was instead convicted of three counts of misdemeanor sexual assault, one count of endangering the welfare of a child, and one count of using a computer to lure a minor for sex, according to NBC News. The last charge required him to register as a sex offender, the outlet reported.

Roughly three years later, a local judge ordered Labrie, now 23, to report to Merrimack County's jail the day after Christmas after denying the former prep school graduate's request for a shorter sentence, NBC News reported. In a statement released shortly after the order was issued, Prout had hailed the judge's order as an important step toward changing rape culture.

"Today's decision is important because it shows survivors that people are listening, even if it takes several years for a single case to be resolved," she said. "The only way we will ever truly change rape culture is by holding perpetrators and the institutions that are complicit to these crimes responsible."

Although Labrie was expected to serve out the remaining 10 months of his 1-year jail sentence, he was released Monday morning for good behavior. An attorney for Labrie told ABC News he was "happy to be home" with family. "He will be settling in and working on rebuilding his life," their statement said. "He'd like to thank the friends and family that have stood by him and supported him all these years."

Since making her identity public, Prout has become a vocal advocate for survivor rights, launching the #IHaveTheRightTo social media campaign and similarly named survivors' advocacy foundation. In a March interview with Washington Post reporter Jenn Abelson at Bloomberg's Equality Summit, Prout discussed the retaliation, bullying, and ostracism she and her family faced after bringing charges against Labrie.

"There are actually websites and Facebook pages out there dedicated to outing victims of sexual assault and to creating narratives about our assaults, about who we are," Prout told Abelson, noting that some of the sites had shared her family's home address and pictures of her sisters, one of whom was only 8 years old at the time. "This not only impacted the way that we lived but it impacted the way that my sister would have to apply for jobs, it changed the way that I had to apply to colleges."

Prout said her experience drove home the importance of standing up against institutions that seek to silence survivors. "I want to use my voice because this has gone on for way too long and there have been too many women who came before me, who paved the way to help me be able to stand up like this," she said. "I felt like I owed it to my mom, to my grandma, to my sisters to stand up, use my voice and help other young women and men to realize that we have these rights to our bodies that we have to stand up for."