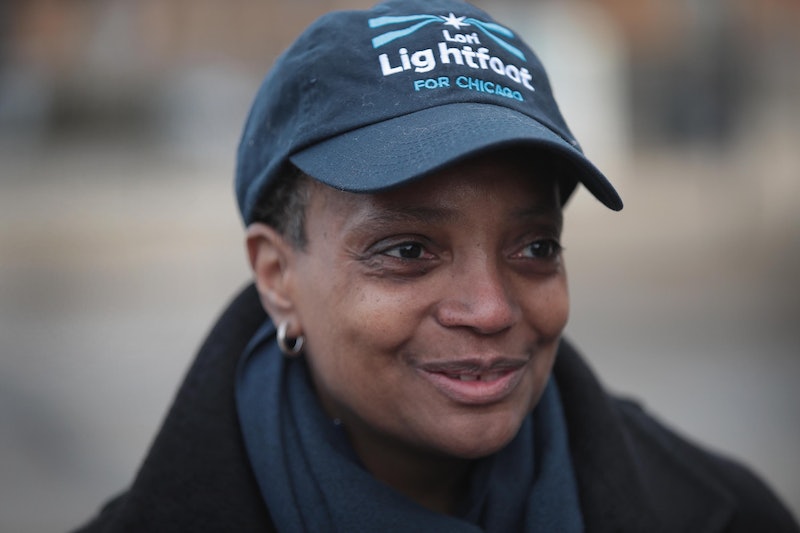 A historic moment has taken place in a major metropolis in the United States. Chicago elected Lori Lightfoot as the new mayor in the city, making her the first black woman and LGBTQ person to ever hold the position. According to the Associated Press, Lightfoot beat Toni Preckwinkle, a former school teacher and 19-year veteran of the City Council.

According to Vox, Chicago is now the largest city to elect a black, openly gay person as the mayor. Lightfoot, a lawyer and former president of the Chicago police board, will succeed Rahm Emanuel, the current mayor of Chicago, who served for two terms.

Of her decision to enter the mayoral race, Lightfoot said to The Advocate in February, “Chicago is an incredibly great city, but it was clear to me that greatness wasn’t being spread to all our neighborhoods." She added later on in the interview, “The economic development strategy of the past 10 years has focused almost exclusively on the downtown area to the detriment of the neighborhoods.”

Similarly, during a candidate forum, Lightfoot said (via The New York Times):

It’s unacceptable, the condition of our communities on the South and West Sides. The only way we are going to carve a new path for the city, to take us in a direction that our communities don’t continue to be resource-starved, is to vote for change.

Lightfoot, a first-time politician, won the mayoral race in a landslide, receiving more than 180,000 more votes than Preckwinkle, per The Chicago Tribune. And Lightfoot managed to do so after competing in the most crowded mayoral primary in the city's history, according to The New York Times.

Lightfoot and Preckwinkle are both progressives, The Times reports, with a good amount of common ground. They both campaigned on prioritizing the spread of equity within Chicago, and focused on conversations related to affordable housing, access to top-level education, and more. As for Lightfoot, herself, she emphasized the need for accountability and transparency within City Hall, per the publication.

During her interview with The Advocate in February, Lightfoot did briefly acknowledge what it would mean on a historic level for her to be elected mayor. She said, “I hope my presence in this race serves as an important reminder of the progress we’ve made in equality and inclusion."

Lightfoot also addressed the age of Donald Trump in an interview with The Chicago Reader. When asked if she had "any sort of nostalgia for the style of Reagan and Bush" rather than the new age, she replied:

We can't move forward together as a city, as a state, as a country, if people aren't willing to see the other person and not villainize them. I'm just hopeful that we'll get to a narrative that's about how can we solve problems of everyday citizens and move the city forward. We're going to keep doing everything we can to advance that narrative because I think it's critically important to reengaging people with government. We've lost too many people that turned us off ... And we really need to be about a hell of a lot more in this city and in this election if we're going to take on and solve some of the tough challenges that are critically important to laying the foundation for the future of the city.

Now, Lightfoot gets to take on those tough challenges herself.