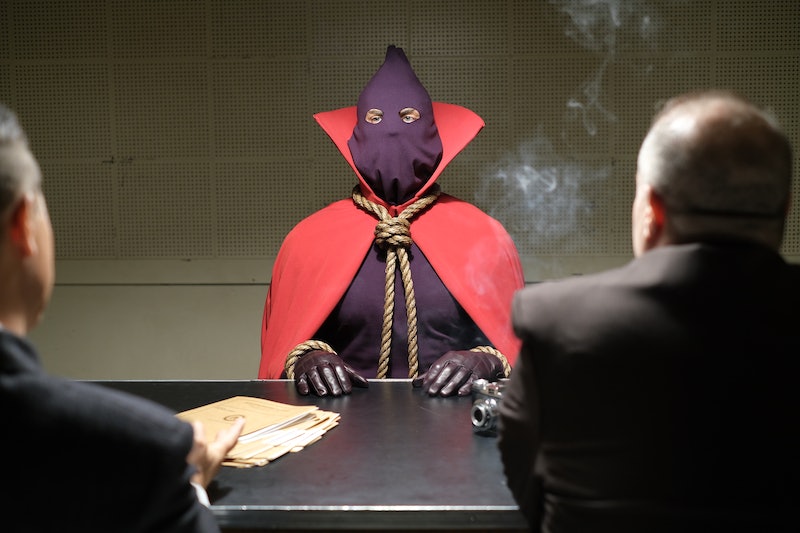 Spoilers ahead for Watchmen. At its heart, the original Watchmen graphic novel was a murder mystery, with a group of masked vigilantes investigating the death of one of their own, The Comedian. HBO's TV follow-up revolves around a similar question — "Who killed Chief Crawford?" — with a group of masked cops investigating the murder of one of their own. While there are plenty of mysteries left to unravel in the final three episodes, viewers finally got an answer to that central question in the season's sixth episode, "This Extraordinary Being." Will Reeves, killed Judd Crawford on Watchmen… and, oh yeah, he's also the superhero known as Hooded Justice, to boot.

The theory that Will Reeves is Hooded Justice emerged as early as after the very first episode, thanks to clues including a black-and-white silent movie and the colors a character was wearing. The fact that the show finally confirmed that assumption felt less like a twist and more like a satisfying culmination of storytelling — seeds that were planted early on finally bearing fruit.

The question of who actually killed Judd was more up in the air. While Will did insist that he was the one who "strung up your chief of police," not everyone (including Angela) took the old man at his word. Some people both in-universe and outside it theorized that the Seventh Kavalry was responsible; others that shadowy figures like Lady Trieu or Dr. Manhattan had a hand in the chief's death. But it turns out that Angela should've just taken her grandfather at his word. While he didn't literally string up Judd — Judd did that himself, in fact — he is directly responsible for her boss's death.

But how did Will kill Judd… and, perhaps more importantly, why? The bulk of the episode consisted of Hooded Justice's origin story, as a young Will Reeves left a decimated Tulsa for New York City and became a cop, only to be nearly lynched by his racist colleagues for daring to arrest a white man who vandalized a Jewish deli. Still wearing the noose and hood he was almost killed in, Will stopped a mugging in an alley — and the rest is history. Earning a reputation as a masked vigilante, Will continued to hunt down the KKK ring operating inside his own police force, until he was recruited to join the Minutemen — a group of masked vigilantes inspired by Will's heroics — by its leader, Captain Metropolis (who he would go on to have an affair with).

The how of Judd's murder revolves around something that happened to Will during his tenure with the Minutemen. During his investigation into the KKK ring (also known by the code name "Cyclops"), young Will discovered a book on mesmerism, a light-based device that renders subjects highly suggestible, and a plot by a villain named Moloch to sow discord by inducing race riots.

In fact, Moloch the Mystic is a character from the original graphic novel, a recurring nemesis of the Minutemen during their tenure throughout the '50s and '60s. His real name was Edgar Jacobi, and he was a magician-turned-criminal who used illusions and mesmerism to wreak havoc and fight Hooded Justice, Captain Metropolis, and the rest of the Minutemen. His secret weapon was a device called the Solar Mirror Weapon; its exact purpose and use in the comics is unknown, other than the fact that it harnessed light.

After Moloch was apprehended and imprisoned, the Minutemen kept the Solar Mirror Weapon in their headquarters as a trophy. It is literally the lens of this mirror through which the reader witnesses The Comedian's attempted assault of Silk Spectre (an assault which was interrupted and prevented by Hooded Justice); looking through it, the reader glimpses a hidden, uglier side of The Comedian that was previous unseen with the naked eye.

In the '80s timeline of the graphic novel, Moloch is now a shadow of his former self, released from prison but riddled with cancer — cancer supposedly given to him by Dr. Manhattan throughout the course of their conflicts, but really given to him by Adrian Veidt (aka Ozymandias) to frame Dr. Manhattan and get the superpowered being out of the way so he could enact his plan to save the world by destroying Manhattan with a giant alien squid. When Rorschach approaches Moloch to interrogate him and gets too close to uncovering the link between him and Veidt, Veidt has Moloch murdered.

It appears that at some point between his tenure with the Minutemen, his decades-long disappearance, and his resurfacing in Tulsa, Will Reeves got his hands on Moloch's weapon and, in a poetic twist, took the weapon first implemented by a racist organization inside the police and used it against a member of a racist organization inside the police. Using the flickering light, Will compelled Judd to hang himself from the tree while he watched… and then waited for Angela to arrive.

Will literally used the weapon of the enemy against them — and it stood in striking contrast to the man who was the inspiration behind Will's career in vigilantism. In the opening scene of the series, a young Will watched a silent black-and-white movie about his hero, Bass Reeves, a real-life figure, who (according to the show's supplemental material referred to collectively as "Peteypedia") apprehended over 3,000 fugitives during his tenure as a U.S. Marshal throughout the late 1800s — and, impressively, killed only 14 of those 3,000 in the process of bringing them to justice.

After he arrests a corrupt sheriff in the fictional silent film titled "Trust In The Law!," the onlooking villagers root for Bass Reeves to string up the crook. But the marshal refuses to lynch the man, telling the assembled crowd that, "There will be no mob justice today." Contrast that to Will Reeves in 2019, stringing up a corrupt sheriff without hesitation, and you'll see how far the man has come from the days of his youth when he idealized Bass Reeves' form of non-violent justice. He lost the last of his innocence when he watched a theater full of black men and women tear each other apart thanks to Moloch's weapon, and then gunned down a warehouse full of KKK members in retaliation.

As to why Will killed Judd, that's still a bit more nebulous. Was it purely revenge, an action rooted in Will's deep-seated anger towards finding another racist in a position of power over people of color? Or was it a targeted attack to protect the plan of Lady Trieu, who he appears to be in cahoots with? Perhaps a bit of both? If killing Chief Crawford was part of Lady Trieu's plan, why is she so threatened by the actions of a group of local racists? How is their teleportation device interfering with her Millennium Clock and whatever its nefarious purpose is?

With only three episodes left in the limited series, answers should start coming fast and furious. But will anyone be left standing when all is revealed, or will the past catch up with them all — just like it caught up with Judd, and Moloch before him?