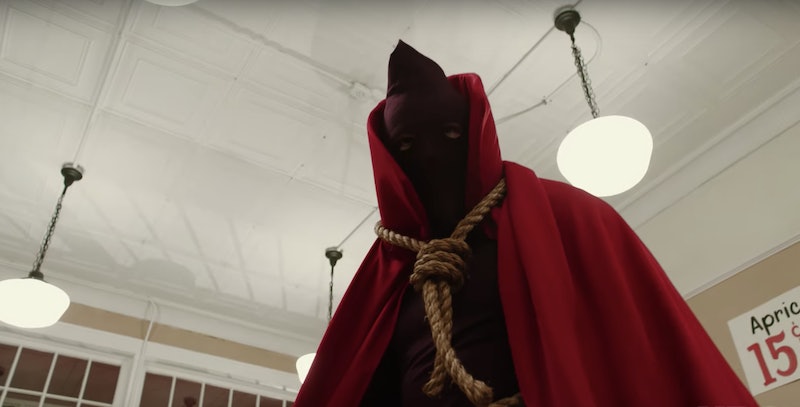 Spoilers ahead for HBO's Watchmen, Episode 2. Watchmen takes place in an alternate universe in which masked vigilantes have existed for decades. Even the caped crusaders in the original comic (and film adaptation) — which took place 30 years before the HBO series — weren't the first. Like Watchmen hero Hooded Justice, who is one of the earliest known vigilantes in the story's universe, though the mystery around his identity still lingers, so many years later. Who is the masked man glimpsed in clips from the show-within-a-show, American Hero Story? And how does his identity impact the plot of Damon Lindelof's remix of the comic universe?

First, a bit of background. In the original graphic novel by Alan Moore and Dave Gibbons, which takes place in the 1980s, the protagonists represent a second wave of heroes, assuming the mantle from their predecessors, the Minutemen. In fact, Hooded Justice was the first known instance of a masked vigilante, having rose to prominence after preventing a mugging, taking out some thieves in a grocery store, and foiling a bank robbery in Queens in 1938.

When other masked vigilantes followed in his footsteps, they eventually banded together to form the Minutemen, of which Hooded Justice was a founding member. Active throughout the 1940s, the team also consisted of Captain Metropolis, The Comedian, Nite Owl, Silk Spectre, Silhouette, Dollar Bill, and Mothman.

Eventually, amid pressure from the government to reveal their alter egos, most of the Minutemen were either killed in the line of duty or retired to protect their identities. Captain Metropolis attempted to resurrect the idea in the 1960s, assembling a meeting of a new team he referred to as the Crimebusters: himself, The Comedian (the only other returning member of the Minutemen), Nite Owl II (Dan Dreiberg, assuming the mantle from his mentor, Hollis Mason), Silk Spectre II (Laurie Juspeczyk, assuming the mantle from her mother, Sally Jupiter), Ozymandias (the alter ego of businessman Adrian Veidt), Rorschach, and Dr. Manhattan — the only figure in the story with actual superpowers.

However, the idea of the Crimebusters never went anywhere, and a decade later, masked vigilantes were officially outlawed by the government thanks to the Keene Act. By the time the graphic novel opens in 1985, the various would-be members of the Crimebusters are operating largely solo and beneath the law. Thirty years after Ozymandias' squid attack on New York City brought the Cold War to an end, the HBO series sees the story resume in a world where masked vigilantes are still officially outlawed — but now it's legal for cops themselves to wear masks in order to protect their identities from terrorists.

What about Hooded Justice? Of the eight original members of the Minutemen, he's the only one whose fate is still unknown. At the height of government pressure to reveal his identity, Hooded Justice simply vanished into thin air, never to be seen again. In Under The Hood, the memoir of Hollis Mason (the original Nite Owl) excerpts from which are interspersed throughout the graphic novel, Hooded Justice's colleague recalls seeing a news report around the same time as the hero's disappearance about a circus strongman named Rolf Müller, who also disappeared around the same time as Hooded Justice. Müller's body was later found shot and badly decomposed in Boston Harbor, and Mason muses about the possible connection between Hooded Justice and Müller, implying that they were the same person.

But were they? In 2012, DC published a series of prequel comics titled Before Watchmen (which were not written by Moore and Gibbons) expanding on the backstory of many of the graphic novel's characters. The comic Before Watchmen: Minutemen drastically retcons the earlier theory about Hooded Justice's identity. In the prequel, it's revealed that Müller was actually a serial killer of children; after the Minutemen traced the killings back to Müller, the Comedian murdered the circus strongman and dumped his body in the harbor.

When Hooded Justice vanished shortly thereafter, Nite Owl planted the connection to Müller in his memoir as misdirect, knowing it wasn't true, in order to protect his colleague's true identity.

If Hooded Justice wasn't Müller, that puts us back at square one, with no clue as to who Hooded Justice truly was. It appears that Damon Lindelof has seized the opportunity of that ambiguity to interweave the mystery of Hooded Justice into his own TV show. In the American Hero Story sequence shown in Watchmen's second episode, Hooded Justice can be heard in voiceover admitting that the body of Rolf Müller is not really him, but a simple case of misdirect to cover his tracks. (It's interesting to note that Müller is also the name of the German woman the Nazi officer summons to transcribe his message to the American troops in the first scene of the episode. Coincidence?)

In the American Hero Story sequence, you can see through the eye holes of Hooded Justice's mask that the "actor" playing the hero is clearly a white man. But that could just be another case of misdirect on Lindelof's part, like Hollis Mason drawing a false connection between Hooded Justice and Rolf Müller in his memoir. Given that the hero's identity is still unknown in the universe of Watchmen, it's sadly realistic that a casting director in that universe would default to assuming he was white, and would cast a white actor to play the role.

At the end of the Watchmen premiere's tragic opening sequence, young Will Reeves, who was supposed to be watched over (literally, his father left instructions to "Watch over this boy"), instead becomes the watcher; after all the adults are killed, he's the only one left to watch over the infant he finds lying alone in the grass. In one violent moment, he became one of the watchmen. What would such a development do to a person at such a young age? Might it lead one to a life of vigilanteism, of constantly seeking to protect those who can't protect themselves?

But, as Moore and Gibbons constantly wanted the audience to ask: who watches the watchmen? Right now, the answer is Angela Abar — the newest iteration in a long line of masked vigilantes, who has found herself unexpectedly face-to-face with history's first-ever hero, the man who triggered a series of events that led directly to her own creation. You can trace a line from Hooded Justice through the Minutemen, the Crimebusters, and the Seventh Kavalry straight to Sister Night. What will happen now that the lines between past and present, the watcher and the watched, are so blurred?

More like this
Everything To Know About The 'Daisy Jones & The Six' TV Series
By Maxine Harrison and Brad Witter
The 'New Amsterdam' Series Finale Opens An “Unexpected” Door To The Future
By Brad Witter
'The Last Of Us' Has Officially Been Renewed For Season 2
By Darshita Goyal
Here’s What Happens To Bill & Frank In 'The Last Of Us' Video Game
By Brad Witter
Get Even More From Bustle — Sign Up For The Newsletter
From hair trends to relationship advice, our daily newsletter has everything you need to sound like a person who’s on TikTok, even if you aren’t.