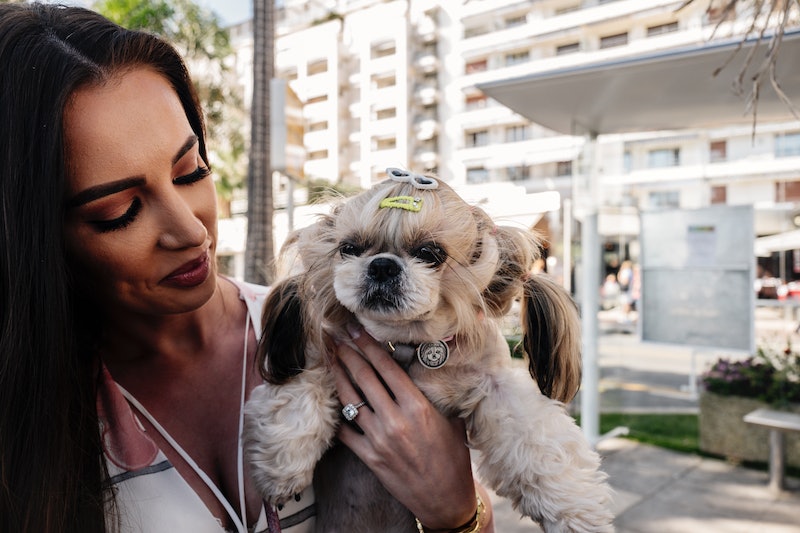 When one woman's husband gave her an ultimatum — him or the dogs — the dogs won. Obviously. If you too have ended a relationship because your partner didn't love your pets, you're not alone. Choosing a pet over a partner is more common than you think. A new poll of 3,500 dog parents from on-demand dog walking service, Wag!, conducted by OnePoll, found that four out of five people think their dog’s reaction to a potential partner is an important factor in determining whether or not it's a love match, and 86 percent said they would break up with someone who didn't jive with their dog.

While some rebuffed partners might be surprised that their significant other would favor a dog over them, the poll reported that "more than 16 percent of married dog owners said they would choose to celebrate their pup’s birthday over their spouse’s." Other research has found that a major trend in millennial home buying centers around whether or not the property is right for a house hunter's dog. And, it's not just millennials who choose pets over people.

One woman even went as far as to end a 25-year marriage after her husband demanded she choose between staying married to him or keeping her dogs, Express UK reported. "I haven’t seen or heard from him since. I thought after 25 years, he should know giving up the dogs was not what my intentions were," dog parent Liz Haslam, 49, told the newspaper. "So he decided to go. Obviously that was his choice."

Haslam's decision isn't much of a shock for dog devotees, as is evidenced from a study earlier this year by Link AKC, a company that makes smart collars for dogs, that found that 50 percent of pet parents regularly decline social invitations in favor of lounging with their dogs (guilty).

What's more, "Dogs play a crucial role in romantic relationships," the poll noted. "One in five dog owners have even gone so far as to stay in a relationship simply because of their partner’s dog." You might remember that episode of Will & Grace where Will kept dating a guy he didn't like because he was in love with his boyfriend's dog. The struggle is real.

The poll also noted that many pup parents use their dogs to attract potential partners, and are successful 84 percent of the time. This proves that dogs really do have superpowers, as if there were ever any doubt.

If dogs aren't your jam, and you enter into a relationship with the intention of getting your partner to re-home their dogs, you're more likely than the dogs to have to find a new place to live. This is why it's important to discuss pets before things get serious. If one of you is severely allergic to animals, it might not be the best match.

If — save for the allergies — it's true love, you can work toward a compromise that keeps you both happy. For example, if you adore dogs but don't yet have one, you can choose a hypoallergenic breed that won't aggravate your BAE's allergies. If one of you simply doesn't like animals (who are these people?), you're likely never going to agree on the pet's role in the home and it might be best to go your own way, just like Haslam did.

"I don’t know what he expected. He told me he was going and had sorted out some other accommodation so he packed his bags," Haslam, who also rescues and places dogs for adoption, told Express UK. "Before we split up he kept saying ‘I do not want to be doing this, I want to get a passport and go away.’ I said that isn’t going to happen so we might as well go our separate ways, which we did."

The Independent UK reported that another study found that many people prefer cats and dogs to their significant others because pets are non-judgmental listeners and they're better at snuggling. Four out 10 people even admitted that they regularly give their pets more attention than their partner. Let's face it, we can learn a lot from dogs. From going on a walk, to eating the same boring meal every day, to riding in the car, they find everything exciting AF.

Dogs are quick to forgive, they don't care what you look like, and they freely give their love and affection. Basically, dogs are a template for how humans should behave. What's the lesson here? If you want to take your relationship to the next level, it's time to get on board with loving dogs and to begin embodying their best qualities — love, acceptance, and non-judgmental listening.

More like this
The Best Time To Date After A Breakup, According To Experts
By Bustle Editors
12 Ways You're Sabotaging Your Love Life
By Teresa Newsome and Lexi Inks
Hinge's New NFAQ Feature Is Demystifying Queer Dating
By Emma Carey
The “Whisper Method” Is The Latest Manifestation Technique Going Viral
By Meguire Hennes
Get Even More From Bustle — Sign Up For The Newsletter