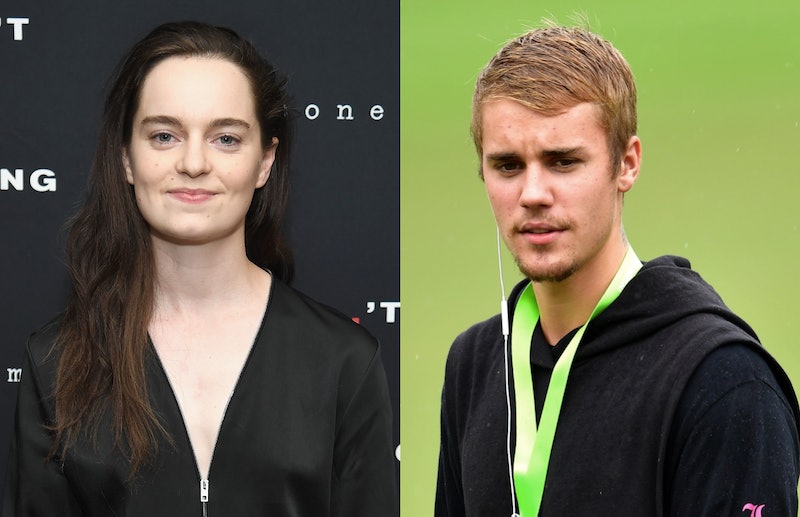 In the wake of the ongoing Taylor Swift/Scooter Braun/Justin Bieber-related drama, choreographer and dancer Emma Portner, who worked on Bieber's Purpose World Tour in 2016, has alleged that she was unfairly treated by the "Sorry" singer. According to E! News, Bieber was reportedly accused of degrading women and underpaying Portner for her work on his tour. (Bustle reached out to a legal rep for Bieber, as well as Portner's reps, for comment, but did not receive an immediate response.)

On her Instagram Story, Portner claimed that her experience working for the Purpose World Tour was not a positive one. In the messages (as captured via Pop Crave's Twitter), she wrote to Bieber, "I regret working under your name." She went on to allege,

"I gave your universe my naive body, creativity, time, and effort. Twice. For content that you made millions off of. While I made zilch. Natta. Barely anything. Less than minimum wage for hours I invested. I couldn't afford to eat. I was sweeping studio floors to be able to practice my own craft. The way you degrade women is an abomination."

Portner, who is married to actor Ellen Page, went on to accuse Bieber of attending a church that doesn't support the LGBTQ community. She wrote, "Your company hired an out lesbian in your music video, and to choreograph some content for your purpose world tour, How do you feel about that? A lesbian, HELPING YOU, for a disrespectful amount of money, as you attend a church that goes against my existence?"

She ended her post by urging Bieber to learn more about the issues she's brought up: "I really hope you educate yourself beyond your bible. You have IMMENSE power. Use it to STOP DEGRADING WOMEN." The "Baby" singer has not yet responded to Portner's claims at the time of reporting.

Portner's Instagram Story detailing her claims against Bieber came shortly after the dilemma between Swift, Bieber, and manager Braun came to light via social media. In case you missed it, the "You Need to Calm Down" singer first posted her thoughts on Tumblr about Braun purchasing her music catalog (on June 30, it was reported that Braun had acquired Scott Borchetta's Big Machine Label Group and, subsequently, the masters for Swift's music). In her post, Swift accused the manager of "incessant, manipulative bullying," and pointed to one particular instance involving two of his clients, Bieber and Kanye West, "bullying" her on social media. (Bustle previously reached out to Braun's rep for comment, but did not hear back.)

After the news broke, Bieber took to Instagram to defend Braun and to try and clear up the situation. Firstly, he apologized to Swift for that particular incident, saying that it was "distasteful and insensitive." He went on to write,

"As the years have passed we haven’t crossed paths and gotten to communicate our differences, hurts or frustrations. So for you to take it to social media and get people to hate on scooter isn’t fair. What were you trying to accomplish by posting that blog? seems to me like it was to get sympathy u also knew that in posting that your fans would go and bully scooter."

As of right now, there has been no clear resolution either for the Swift-related issue or the new accusations brought up by Portner.

More like this
Beyoncé & Madonna’s “Break My Soul” Remix Honors A Group Of Black Icons
By Stephanie Topacio Long
Britney Spears & Sam Asghari Called Out Kevin Federline’s Claims About Her Kids
By Grace Wehniainen
Willow Smith & Camila Cabello’s “Spiritual Experiences” Led To “Pyschofreak”
By Grace Wehniainen
An Ultimate Guide To The Music Of 'Rap Sh!t'
By Brad Witter
Get Even More From Bustle — Sign Up For The Newsletter