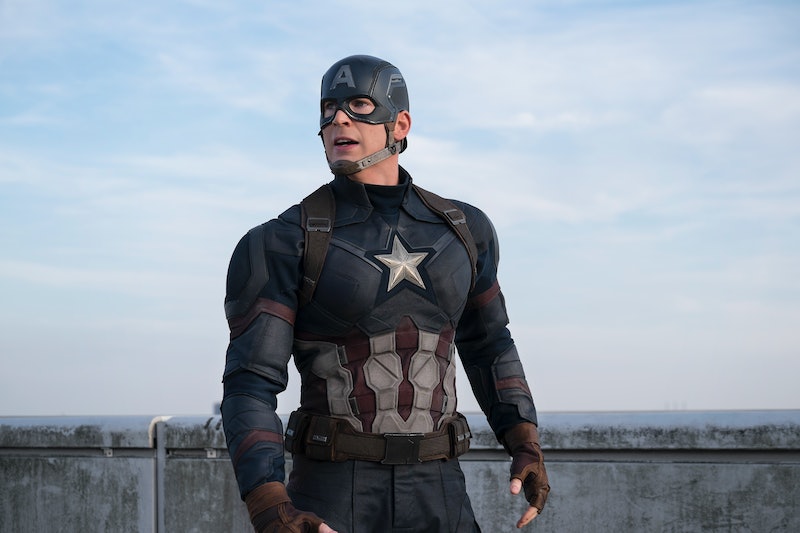 Six actors have played James Bond in live-action feature films. Another six have played Batman. So when will someone else pick up Captain America's shield? That question is bound to be on everyone's mind — especially Marvel Studios execs — after Chris Evans confirmed that he's done playing Captain America after Avengers 4.

The 35-year-old actor broke the news in a recent interview with USA Today. "I've had a great run," he told the publication. "Superheroes are reinventable entities, like Batman or even James Bond. These movies find new incarnations and new ways to tell the story. I am all for it. However they want to proceed after Avengers 4, it's really up to them. I walk away with no regrets and endlessly thankful."

This news isn't exactly surprising, given that rumors of Evans' departure from the MCU have been swirling around ever since the actor mulled the possibility of retiring three years ago, leading many fans to speculate that Steve Rogers might die during Civil War. Obviously, that particular turn of events didn't come to pass… but it seems like the idea of Captain America making the ultimate sacrifice isn't off the table, if Evans is really nearing his end point with the franchise.

But Steve Rogers might not be the only one hanging up his tights in the near future; Evans also hinted that one of his high-profile co-stars is also planning his own exit from the MCU. "[Robert] Downey [Jr.] is far closer to reaching that point where he may walk away," Evans revealed to USA Today. "And I don't know how you replace Downey as Tony Stark. I don't know who else can touch that."

What exactly does Evans mean by the fact that Downey, Jr. is "far closer" to walking away from the superhero franchise? If Evans is planning to leave after Avengers 4, does that mean Downey, Jr. will be done even sooner? Will Iron Man die in 2018's Infinity War? It's not inconceivable. These people can't play superheroes forever; 52-year-old Downey, Jr. in particular must be counting down the days to his Marvel curtain call.

As inconceivable as it is to imagine the MCU without Tony Stark or Steve Rogers, these two characters leaving around the same time would actually have a nice bit of symbolism to it. They're the two oldest members of the Avengers — Downey, Jr. is the oldest actor of the bunch and his Iron Man kicked off the universe, while Evans is playing the actual oldest character, since Captain America is technically 98 years old — which makes them the father figures of the group. They were also the source of conflict and leaders of the warring factions in Civil War, so watching them bond again over a common enemy just in time to fall in battle would be a tragic and fitting end to their arcs.

Killing off these two iconic characters would be the perfect way to draw a line between Avengers 4 — which the entire MCU has been leading up to so far — and the subsequent Phase 4. And just because Evans and Downey, Jr. might be done with the franchise doesn't mean we'll never seen Captain America or Iron Man again.

While those pseudonyms are most famously associated with Steve Rogers and Tony Stark, they have also been used by other characters throughout the years: on the page, Stark's friend Col. Rhodes took up the mantle of Iron Man for a while, and the role of the hero is currently being filled by former villain Victor von Doom. Likewise, Captain America has been a title assumed by 10 different characters over the years, including both Sam Wilson (Falcon) and Bucky Barnes (the Winter Soldier) at various points in time.

Evans is right when he says, "I don't know how you replace Downey." Luckily, they won't have to. Recasting the role of Tony Stark would be a futile task; but filling out the empty Iron Man suit doesn't necessarily have to be.