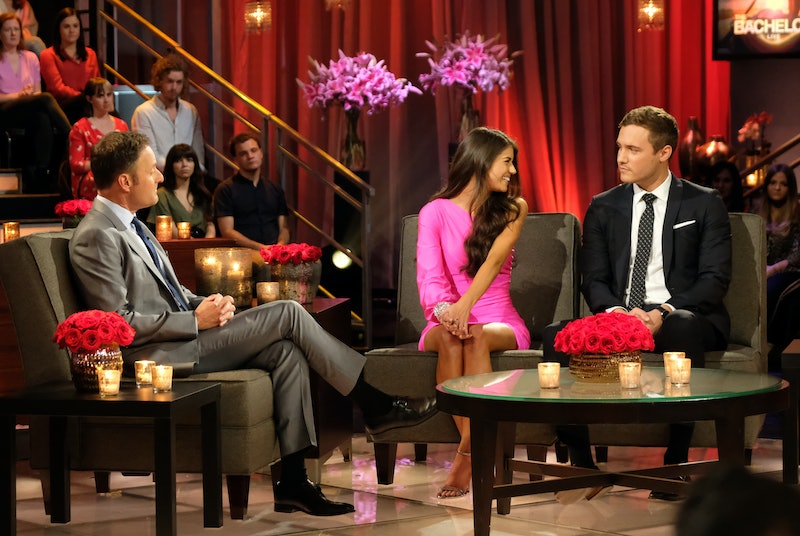 Chris Harrison has experienced his fair share of uncomfortable moments over the years, but nothing could prepare him for the most recent After the Final Rose. According to a recent interview with E! News, Peter's Bachelor finale was the most awkward TV moment Chris Harrison ever experienced. Yes, Barb and Madison's confrontation was so uncomfortable, it made an impression on the Chris Harrison.

"It was the most awkward moment I've had in television, and I've had some really awkward moments," Harrison said, referencing Peter's mother, Barbra, expressing her disapproval over her son's rekindled relationship with Madison. (Peter and Madison announced their split on March 12). In fact, the Bachelor host said he's never seen a contestant's parents take such a strong and dramatic stand on the show before, and he didn't approve of Barbara confronting Madison on live TV.

"I mean look, everyone has their opinions and has their say, but I've never had it [expressed] so strong on live TV and in front of everybody," Harrison said, adding that he felt it wasn't the right "time and place" Peter's mother to share her opinions. "Look, I'm not saying Barb's right or wrong, but even if she's dead right, it's just ... was the timing right?"

Of course, it wasn't just being caught in the middle of Barb and Madison's showdown that made Harrison feel awkward; he was also said he could tell the whole thing was taking an emotional toll on Peter. "I was so uncomfortable, because it has to do with family and family is something I kind of cherish," Harrison said, adding that since Peter is also close with his family, the whole situation was "heartbreaking. It was really really uncomfortable in like a really sad way."

Despite being caught in the middle, Harrison told Good Morning America on March 11 that he tried to keep the peace between Madison and Barbra as best as he could. "I tried to fix it," he said, revealing that things were even more tense in person than they appeared on screen. "I was trying to, like, extend an olive branch and I was hopefully trying to leave on a good note and just couldn’t get there."

During the After the Final Rose special, Barbara claimed that the source of the Webers' contentious relationship with Madison was the fact that she was "three hours late" to meet them, and she never apologized. While Harrison previously told E! News that the delay was also Peter's fault, in his new interview, the Bachelor host revealed that everything Barb said was true — at least, from her perspective.

"I think you've had a very real true depiction of everybody's path and everybody's story," Harrison said of the many revelations on the dramatic finale. "I mean I think looking at it back and watching it and having lived it myself, I don't feel like anybody was put in a bad light or, or any, any false light." Apparently, the only thing that was different IRL was the fact that everything was much, much more uncomfortable than it appeared on screen.