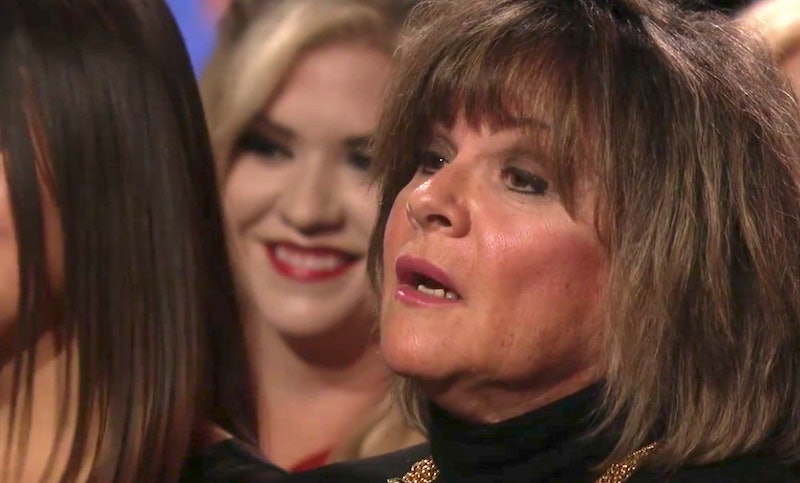 It's been clear from the beginning that Peter's mom isn't a fan of Madison, but she really didn't hold back during their exchange on The Bachelor finale. Shots were fired, and they both got defensive very, very quickly.

After Peter and Madison officially decided to pursue a relationship, Chris Harrison asked Barb her thoughts, knowing that she was always vocal about her preference for Hannah Ann. She said:

"When I went for Hannah Ann, it was because she was the one that embraced me with love. She was just so, so loving toward me. And I was just into her so much. I just loved her. And the next day, we met Madison. And it started on a rocky road because she had us wait three hours for her to come in because she didn't want to meet us. So we were there three hours, we had just come across the country — excuse me — across the world, and we were exhausted. You know, we were just getting used to the time there, and we had to wait three hours. And when she did come in, the whole family, we didn't get an apology from her," she said.

"And when I proceeded to ask her if she was madly in love with my son, she said no. And that she would not accept the proposal in four days. So how do you expect a mother who loves her son with all of her heart to take that? I couldn’t. My whole family — my son Jack; my husband, Peter; and myself — we didn’t see that. And as a mother, that wasn't what we were expecting. And therefore, when I said that I wanted Hannah Ann so badly was because I knew that we just clicked right away Unfortunately, we did not have that connection with Madison."

Ouch! After a commercial break, Madison had a chance to respond, and the tension in the room only grew. She said of Peter's family and her relationship, "I can't change the past, and there is a lot that's out of my control. I came into to this journey and I said that I was gonna be unashamed of who I am and undeniably myself, and that is something that I've done throughout this entire journey. I'm not a mom, so I don't know what it's like, you know, to have a son, to have kids. I know that I have love and respect for Peter, and therefore I have love and respect for Peter's family, and I will never say a negative word about anyone or anything." But she did get in one last jab at Barbara.

Peter attempted to put out the intensifying fire by assuring his family his love for Madison. But, unfortunately, it didn't really work. Madison said, "I think this isn't just Peter's journey. You know, when you sign up to come on a show like this, you're looking for love, too. It isn't just Peter looking for his wife. I totally understand, you know, as a mother, you are gonna obviously be thinking about Peter. But also this is my journey, too. And this isn't just Peter choosing me, this is me choosing Peter."

Chris Harrison then intervened and asked Barb how she thought the family, Madison included, could turn the page and start fresh. Barb's response might have been too candid. "He's gonna have to fail to succeed. That's it," she said. "All his friends, all his family, everyone that knows him knows that it's not, you know, it's not gonna work. So we've been trying to help them. We want it to work."

Then the whole room proceeded to loudly Boo! Peter's! Mom!

If fans thought that Barb's "bring her home" moment was her major moment, they were wrong. Never before has a family and a final contestant gone so hard at each other. It doesn't seem like Peter and Madison will have an easy time trying to win his family over from here.