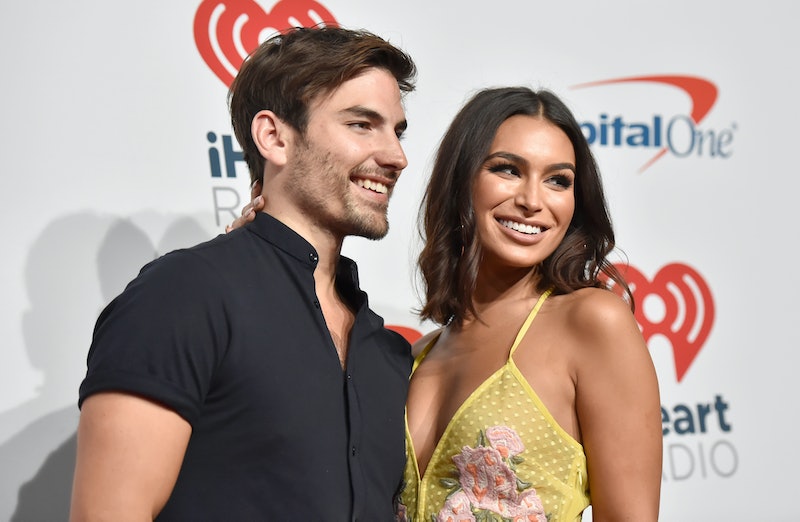 Bachelor Alum weddings can be just as exciting as season finales, and Ashley I. and Jared's will be no different. After meeting on Season 2 of Bachelor in Paradise in 2015, the two started dating a few years later before getting engaged in 2018, and they're now set to marry in August. But unfortunately Chris Harrison won’t be at Ashley Iaconetti and Jared Haibon’s wedding, which is a major bummer. Not just for them, but also for anyone else who was hoping the Bachelor patriarch would make an appearance, or possibly have a bigger role in their nuptials.

Ashley I. revealed the sad news on the July 29 episode of her podcast, I Don't Get It, as reported by Us Weekly. She said, simply, "Chris Harrison’s not coming... He has other prior obligations." It's not apparent yet what those plans are, but, as she pointed out later in the podcast, it must be important because this just might be the first Bachelor Nation wedding he hasn't come to.

Harrison's absence is somewhat surprising, especially as there had been rumors that Harrison was actually going to officiate the wedding. In June, Ashley and Jared told ET, "We're keeping it in the Bachelor family," referring to who would be officiating their "I do's." But whoever it is, they teased, would be "very near and dear to our hearts." They might not have been talking about Harrison, but it sounds like whoever the officiant is will be someone Bachelor Nation will recognize.

Of course, Ashley is pretty sad about the Bachelor host not making it to her wedding, but it's not all doom and gloom. The bride-to-be added that Harrison couldn't have been nicer when breaking the news. "He sent us a really nice gift from our Crate & Barrel registry, and he was very thorough and sensitive about what he said when he had to say that he couldn’t go," she said. "Like, it was a very long explanation and it was very nice. Although it was very disappointing.”

There won't be any celebrities outside of Bachelor Nation at the wedding, Ashley shared on the podcast, but there's a slight chance that Mila Kunis and Ashton Kutcher will show up, since they're fans of the franchise and Ashley has said she knows they received their Save the Date announcement. She also shared previously to Us Weekly that there will also be a rose theme to the wedding, with Ashley giving major hints that Titanic is going to have a role in the ceremony (definitely with a better ending). This is a continuation on her movie-themed bridal shower, which included When Harry Met Sally, 27 Dresses, and Jerry Maguire, according to People, giving a rom-com theme perfect for two reality stars.

Their wedding planner, Troy Williams, also teased the wedding during Ashley's podcast, saying that the two BiP alums will "surprise a lot of people" with their wedding ceremony, according to Us Weekly. "This is my first church wedding out of all of my brides that I’ve done because everyone wants to do something different so I’m really excited about that actually," he said. "Because there’s a juxtaposition to the church and their reception venue … and we definitely have a running [theme] of their love of movies and movie themes throughout everything.”

Even though Chris Harrison not coming to their wedding, Ashley and Jared seem to have things planned to a T, and it sounds like they've done everything possible to make it a day they'll never forget.